Donald Wilfong
|
Posted: Sep 09, 2018 10:30 PM
Share   Tweet
The opinions expressed by columnists are their own and do not necessarily represent the views of Townhall.com. 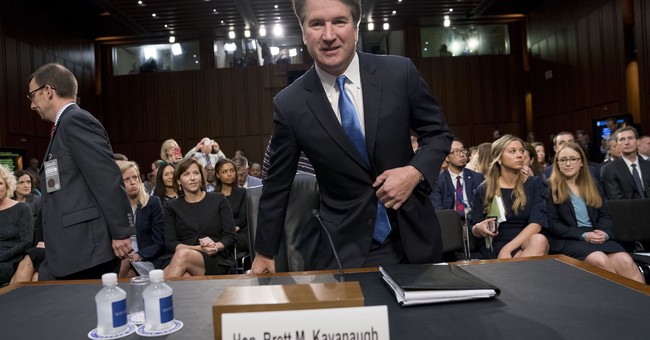 With the conclusion of the confirmation hearing for Supreme Court nominee Judge Brett Kavanaugh, one thing remains clear. Judge Brett Kavanaugh will make an excellent Associate Justice to sit on the nation’s highest court. There is no doubt in my mind that as soon as Judge Kavanaugh dons the black robes he will check any political ideology at the door. Judge Kavanaugh, as he always has done, will read the law at face value, listen to both sides of the argument, and draw his own independent conclusions on how the facts of each case fits within the framework of the law.

Judge Kavanaugh understands the simple truth that most people in our nation has forgotten, The Supreme Court of the United States does not make the law. Instead, justices are supposed to merely read what is already written and interpret the written text to reach decisions on cases.

The profession of judgeship is not an easy one to perform, one must be totally impartial by possessing the ability to compartmentalize any political ideologies and set all personal feelings aside. Over three days of non-stop interruptions and grilling from 21 senators as well as over his entire career, Judge Kavanaugh has proven he can exhibit and has exhibited these abilities.

Unfortunately, even though Judge Kavanaugh is extremely qualified, he will be lucky to receive 55 votes in the Senate. Why? Because times have changed. Senators now are expected to vote down party lines and would not dare to vote for another party's President Supreme Court nominee.

Judge Kavanaugh has served 12 years as a judge and has decided more than three hundred cases. This alone is enough to push him well past any doubt that he is qualified. Today’s times are different, they are undoubtedly decisive, and the gap of division competes in size with the Grand Canyon. But, it didn’t use to be this way.

For example, Senator Lindsey Graham voted for both of President Obama’s nominations (Sotomayor & Kagan) because he believed they were “qualified by any reasonable measure, given the history of the Senate.”

The history of the Senate is one which looks at nominees’ records to see if they are qualified to take on the highest court in the land. A respectable process in which committee members would ask the nominee about their qualifications and any clarifying questions about past opinions. They would examine the full body of work and make a vote on the qualifications, not the orientation. Even Justice Ginsburg received 96 votes, and she was the general counsel of the ACLU.

The way the process used to be was designed to protect the judicial branch from politics and keep the Hig Court independent. That, no matter the nominee's political ideology, merit and qualifications should reign supreme in the Senate when examining a potential Supreme Court Justice.

In any other time period his temperament, patience, decency, and impartiality would carry Kavanaugh to a 95 plus confirmation vote.

When the dust settles one thing will become clear, Judge Kavanaugh deserves more than anyone else to become the newest Associate Justice of the Supreme Court. When the authors of the Constitution created the Judicial Branch and the concept of judicial review, they envisioned justices identical to Judge Kavanaugh to be a part of the highest court in the land. They envisioned judges who would, in the words of Marbury v. Madison, “say what the law is.” Which is more important than how many votes he gets.