Message to the White House: Presidential Politics Are Not For Cry Babies. Get Over It.

Donald Lambro
|
Posted: Jul 12, 2019 12:01 AM
Share   Tweet
The opinions expressed by columnists are their own and do not necessarily represent the views of Townhall.com. 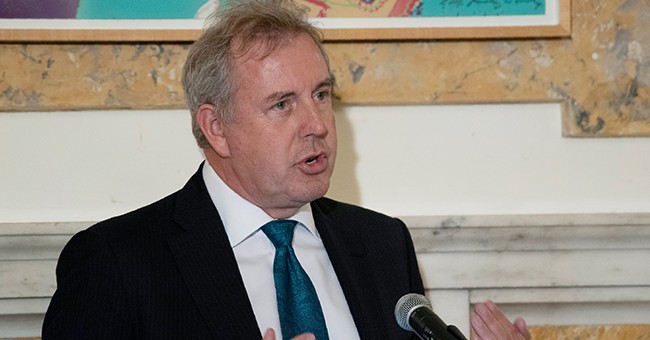 WASHINGTON - Presidents, by the very nature of their job, have to put up with with a lot of criticism, and Donald Trump gets more than his share of, well, downright insults.

Take, for example, the recent remarks from the British Ambassador to the U.S., Kim Darroch, whose unvarnished views about the president, contained in leaked diplomatic cables, described Trump as “insecure,” “dysfunctional,” “inept,” and “unpredictable.”

Trump fired back Tuesday calling Darroch “wacky,” “a very stupid guy,” and “a pompous fool.” He proceeded to broaden his response by attacking Prime Minister Theresa May for her “failed” handling of the Brexit negotiations, saying he advised her on how to deal with the issue, “but she went her own foolish way” and “was unable to get it done. A disaster!”

Obviously, the ambassador’s leaked confidential cable was an embarrassment for the May administration, but Trump’s rash decision to attack the prime minister did more harm than good

“In a stroke, the cables appeared to undercut an intense English charm campaign to win over Trump, who was feted by Queen Elizabeth II, had tea with Prince Charles and commemorated a D-Day victory during an official state visit last month,” the Washington Post said on Wednesday.

But Trump didn’t stop there. He stepped up his criticism by saying he would “no longer deal with” Darroch who was disinvited from a Monday dinner with Treasury Secretary Steven Mnuchin and the emir of Qatar.

As of late Tuesday, the State Department has not been told to end all its contact with the ambassador, waiting, no doubt, to see if Great Britain decided to recall him.

Instead, the political squabble over Trump’s remarks about May has become a divisive issue in the upcoming election to replace her.

“I think [Trump’s] comments about Teresa May were unacceptable and he shouldn’t have made them,” Hunt said.

Hunt had tweeted earlier in the day that “If I become PM our Ambassador stays.”

Then in the evening debate, he again promised to keep Darroch in his ambassador’s post until his retirement in 2020. Johnson, on the other hand, has refused to say whether or not he would recall Darroch.

All of this is enormously sad because of the special relationship and alliance that America has long had with Great Britain.

“One White House official said it was ‘unfortunate’ what had happened with Trump’s comments because there previously had been ‘a very strong relationship,” the Washington Post reported Wednesday.

All of that is now endangered due to some name calling that future generations will little note nor long remember.

Politics is a rough and tumble business. It isn’t the kind of work for the faint hearted.

Perhaps the most famous exchange of insults came in a blistering letter Harry Truman wrote to the Washington Post’s music critic Paul Hume who had written a scathing review of his daughter’s soprano voice in a concert she gave at Constitution Hall.

“Miss Truman cannot sing very well. She is flat a good deal of the time — more last night than at any time we have heard her recital when one can relax… She communicates almost nothing of the music she presents…,” Hume wrote in part.

In an angrily-written letter, Truman responded this way: “Mr. Hume: I’ve just read your lousy review of Margaret’s concert. I’ve come to the conclusion that you are an ‘eight ulcer man on four ulcer pay,’” he wrote.

“Some day I hope to meet you. When that happens you’ll need a new nose, a lot of beefsteak for black eyes, and perhaps a supporter below!”, the president said.

His letter sparked a torrent of criticism from voters who bitterly admonished him for his “undue ‘concern’ over your daughter’s music career” while our soldiers were dying in World War II.

As for Trump, he had better understand that criticism goes with the presidency. Get over it.