Donald Lambro
|
Posted: Jan 20, 2017 12:01 AM
Share   Tweet
The opinions expressed by columnists are their own and do not necessarily represent the views of Townhall.com. 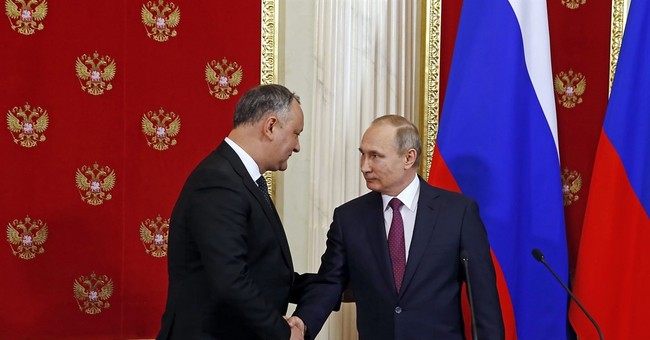 WASHINGTON -- As President-elect Donald Trump prepares to take office, yet another nominee to his forthcoming Cabinet is staking out sharp differences with his views on foreign policy.

Trump, who has negotiated numerous business deals with Russia, has never uttered a discouraging word about the former Communist KGB agent who runs the country with a dictatorial hand. In fact, he has praised Vladimir Putin as a "strong leader" and a good friend who can be trusted.

But that's not what South Carolina Gov. Nikki Haley, Trump's nominee to be ambassador to the United Nations, thinks of Putin. She says he is a criminal who cannot be trusted for a minute.

Haley told the Senate Foreign Relations Committee during her confirmation hearings that the United States should be deeply skeptical of Putin, despite Trump's plans for a cozy relationship with the Russian president, who has invaded neighboring Ukraine and dreams of one day controlling the Baltic nations.

"Russia is trying to show their muscle right now. It's what they do," Haley told the committee Wednesday. "I don't think that we can trust them. We have to continue to be very strong back and show them what this new administration is going to be."

Haley's stinging remarks appeared to be aimed right at Trump, as much as they were directed to the members of the powerful foreign affairs panel.

But Haley didn't stop there, because someone had to state the obvious, even if Trump wouldn't dare to criticize the powerful ruler of a country where he has closed some of his best "deals." Russia had brazenly invaded a neighboring, sovereign nation and seized parts of Ukrainian territory (including the Crimean peninsula) in 2014, she said.

President Obama imposed economic sanctions on the Kremlin, but they were little more than a mere slap on the wrist that didn't appear to hurt the Russian economy. Haley bravely suggested that tougher sanctions should be imposed -- something Trump, to this day, refuses to do to his business buddies in Moscow.

But Haley's tough-talking testimony wasn't over, not by a long shot. She criticized Putin's decision to bomb civilian areas of Aleppo to help his evil ally, Syrian dictator Bashar Assad, subdue the rebel patriots who sought to topple him from power.

Those bombing raids killed and maimed thousands of defenseless men, women, children and the elderly, burying untold numbers beneath tons of rubble, while Trump and the rest of the world looked the other way.

But not Haley, who told the committee that Putin is guilty of war crimes, a charge that former Exxon Mobil CEO Rex Tillerson, Trump's nominee to be secretary of state (and Haley's boss), refuses to embrace.

Tillerson has also had close, friendly ties with Putin over many years of lucrative business deals that enriched his company and Russian oil executives as well. But at his confirmation hearings, he maintained he was not privy to any evidence to support charges of war crimes.

Does he read newspapers?

Haley took many of the committee's members by surprise with her honesty, frankness and willingness to distance her views from those of the president-elect.

Trump's worldview on these and other foreign policy issues are "the exact opposite of what you are articulating it to be," said Sen. Chris Murphy of Connecticut, a Democratic member of the committee.

Well, she responded, "That's how an administration works. You surround yourself with people who don't just say 'yes' to what you think."

It's difficult to offer a long-term forecast of how a Trump administration will eventually deal with Russia, a country that most U.S. foreign policy analysts believe is our chief adversary.

Whatever happens now in Syria, it is likely that at some point, Assad will be charged with war crimes in the mass killing of his own people who were noncombatants.

But what about the role his chief ally, Putin, played in the massacres that took place in Aleppo and elsewhere in Syria? Those were his warplanes, under his command, that conducted relentless saturation bombing raids on terrified, defenseless civilians.

What will Trump say if Putin, who has generously fed Trump's ego by saying how brilliant he is, is also charged?

We know what Haley will say. But what would her boss, Tillerson, who insisted he didn't have any evidence of Putin's war crimes, tell her to do if criminal charges against him are brought up for a vote in the United Nations?

As for Trump, his friendship and undying admiration for Putin remain stronger than ever.