Donald Lambro
|
Posted: Oct 14, 2016 12:01 AM
Share   Tweet
The opinions expressed by columnists are their own and do not necessarily represent the views of Townhall.com. 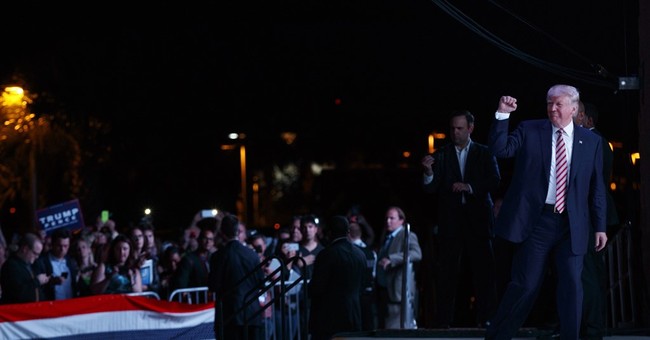 WASHINGTON - If the tawdry, tasteless, and utterly vulgar 2016 presidential campaign is remembered for anything, it will be its failure to deal with significant political issues that matter most to the American people.

In a campaign marked by the anatomical revelations in Donald Trump's abusive sex life, America's weak economy is in danger of becoming a footnote.

But as Trump dismisses a wave of angry complaints from women who say the real estate mogul forcibly groped them, and grabbed their private parts, saying his taped remarks were nothing more than "locker room banter," the stalled economy has been erased from the nation's news headlines.

The Commerce Department reports that the economy's anemic growth rate has slowed to 1.4 percent. And the Bureau of Labor Statistics says that only 156,000 jobs were created last month.

The Labor Department also revised its jobs numbers downward by 7,000 in the two previous months, while top economists say they expect the economy to barely grow by 1.6 percent this year, the worst GDP growth rate in five years.

America's economy is being held back because of "paltry business investment," restricted by anti-investment policies that have killed jobs and all but halted business expansion.

The U.S. labor force, since February, has risen to little more than 60 percent -- a pathetically low rate that hasn't existed since the 1970s.

This has led to growing criticism of the White House's economic policies, including one of Obama's former chief economic advisers.

"The specter of… stagnation and inadequate economic growth on the one hand, and ascendant populism and global disintegration on the other, has caused widespread apprehension," former Treasury Secretary Larry Summers, under President Clinton, writes this week.

"While recession does not impend in any major region, growth is expected at rates dangerously close to stall speed," says Summers who was also director of the White House National Economic Council and Obama's chief economic adviser.

"Few things will be as important to the success of the next president as the restoration of confidence," he says.

But that's not what the two major party candidates have been dealing with in recent weeks, nor what the nation's major newspapers and nightly news shows have been reporting.

The explosive 2005 video tape showing Trump bragging about his sexual exploits with women has blown just about every other issue off the news. It was a new low, even for Trump.

"And when you're a star, they let you do it. You can do anything," he is heard saying over an open mike. But, wait, there's more.

Here in the nation's capital, for example, are two recent headlines in the Washington Post:

"Women accuse Trump of forcible groping and kissing," and this one: "As Trump runs for president, some see 'all too familiar' traits of a dictator."

The former quotes women by name who said they were victims of his sexual assaults. The latter referred to his remarks, praising the worlds' worst dictators, saying that he admired Kim Jong Un, the North Korean leader who killed his uncle. But "you've got to give him credit. He goes in, he takes over, and he's the boss."

Faced with the humiliating sex tape that was repeatedly played on TV news shows, you'd think Trump would want to change the subject and get back on track.

But this week, his biggest issues on the stump were his attacks on Bill Clinton's sexual escapades in the 1990s, Hillary Clinton's criticism of the women in her husband's life, and of course bashing the national news media and threatening to sue them.

But does anyone really think these are the issues that trouble Americans more than a declining economy, fewer jobs, a mushrooming national debt and another terrorist attack?

The disclosures about Hillary on the nightly news and in the nation's papers continues to be about her hacked e-mails which have raised new questions about her closed door speeches to major Wall Street bankers that she has refused to make public.

Clinton has been under relentless attack by Trump for her free trade positions, telling the voters one thing and powerful Wall Street bankers another.

"My dream is a hemispheric common market, with open trade and open borders," she said in a speech that was first reported on the BuzzFeed website.

Something she would never say at a labor union rally quite that way, or to any other audience for that matter.

But, if it's possible, this election became even nastier in Sunday's second debate in St. Louis, when Trump tried to steer the debate away from his sordid sex scandals and toward the issues that have dogged Clinton's candidacy from day one:

The classified material that she sent over an unsecured home e-mail system, and the Americans who were killed in the fiery terrorist attack in Benghazi, because she failed to provide them with the additional security they requested.

When Clinton said it was "awfully good that someone with the temperament of Donald Trump is not in charge of the law in our country, " Trump shot back, "Because you'd be in jail."

A local TV news program here set up a "soap box" on a busy street corner this week, asking passersby what they thought of this election. "Nasty", "demeaning" "ugly," were some of the more frequent responses.

I don't know about you, but I'll be glad when its over.