The Obama Economy Is Firing On One Cylider At Best

Donald Lambro
|
Posted: Jun 08, 2016 12:01 AM
Share   Tweet
The opinions expressed by columnists are their own and do not necessarily represent the views of Townhall.com. 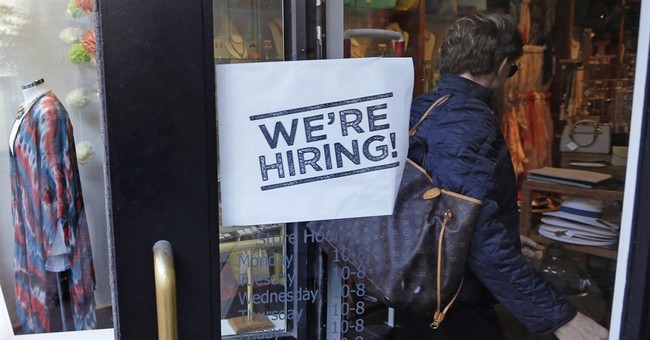 WASHINGTON -- In the eighth year of Barack Obama's presidency, the liberal national news media continue their shameful cover-up of his failed economic policies.

The latest and most stunning example of the media's duplicitous shell game came last Friday, the day the Labor Department's Bureau of Labor Statistics (BLS) released its monthly jobs report.

The Washington Post ran a front-page story, written the day before, under the headline "Job market, at long last, shows signs of resilience."

The story's dubious lead said: "For the first time since the recession ended, America's job market has been firing on all cylinders: Workers have been finding more jobs, making more money and spending more of their paychecks."

The Post went on to say that the job market was now racing along at "a healthy pace that has renewed hope of finding employment for many workers." Wages were up, consumers were spending more, and Americans were much more "confident" in Obama's economy.

The story went on to crow about "the solid performance of recent months" and how "resilient the economy, and particularly the labor market, has proved to be."

There was even a hint that the Federal Reserve would be emboldened to resume raising interest rates, because of all this purportedly good news.

But later that morning, the BLS released the bad news. Here's how CNBC, the business news network, reported it:

"Job creation tumbled in May, with the economy adding just 38,000 positions, casting doubt on hopes for a stronger economic recovery as well as a Fed rate hike this summer."

A measly 38,000 jobs in a shrinking economy that had all but stopped growing last year, turning in a pathetic 1.4 percent economic growth rate in the fourth quarter, and an even more anemic 0.8 percent growth rate in the first three months of this year. Clearly, this wasn't an economy "firing on all cylinders," as the Post falsely described it.

The shrinking jobs number stunned Wall Street, where stocks plunged. Fed Chairwoman Janet Yellen, appointed to her post by President Obama, called the minuscule jobs number "disappointing" and "concerning." She continued to portray the economy in her usually optimistic terms, but admitted, "New questions about the economic outlook have been raised" by the jobs report.

Needless to say, no one's predicting the Fed will raise interest rates anytime soon, not with the U.S. economy flat on its back.

So how did the Post handle the gloomy jobs report the next day? Well, it didn't give the same front-page placement it gave to its everything's-coming-up-roses story the day before. The embarrassing jobs report was buried on Page 9, under a headline that read: "U.S. hiring is weakest in six years, raising doubts about rate hike."

The newspaper continued to cling to its belief that there were "other signs that the economy was picking up after a weak start to the year."

But May's sharply lower jobs number was far from being an anomaly. The Labor Department revised its figure down for March and April, too, by 59,000.

The story ran alongside a very defensive sidebar that attempted to explain how the Post could have believed that the Obama economy was like the Reagan recovery when it looked more like Jimmy Carter's looming recession.

"The good news was bad and the bad news was worse, so our only consolation is that this might be a blip," the Post's sidebar argued.

Sure. That explanation will get you a one-way ticket to the unemployment line.

Throughout his presidency, Obama has been trying to con the American people into believing that his policies are working and the economy was getting stronger.

And the news media have been trying to help him out in any way they can. Good economic news gets promoted. Bad news is buried in the back of the paper, or dismissed in a few sentences on the nightly news -- as last Friday's weak jobs numbers were treated on the "CBS Evening News."

The bad information buried in the BLS reports, like the millions of long-term jobless or part-time workers who are not counted, are rarely, if ever, reported.

In May, for example, nearly 2 million people "were marginally attached" to the labor force. These were people who had "looked for a job sometime in the prior 12 months," but "were not counted as unemployed because they had not searched for work" in the last few weeks.

Then there were 6.4 million more people described as "involuntary part-time workers" whose hours had been cut back or who couldn't find a full-time job. Many long-term job seekers get discouraged and have stopped looking. They're not counted as unemployed.

Obama brags about growing manufacturing jobs, but that sector lost nearly 20,000 jobs in May alone, the BLS says.

If the Obama economy is really and truly running "on all cylinders," why is it that the Gallup Poll says 59 percent of U.S. adults tell them the economy is "getting worse"?

Numerous studies and other economic surveys tell us that business start-up investments have sharply declined. That more Americans have been withdrawing money from their retirement funds to make ends meet. Major retailers have seen lower sales. And for many, if not most, workers, wages remain flat.