Capitalism Is Still Just "A Theory" for Obama That "Doesn't Work"

Donald Lambro
|
Posted: Apr 29, 2016 12:01 AM
Share   Tweet
The opinions expressed by columnists are their own and do not necessarily represent the views of Townhall.com. 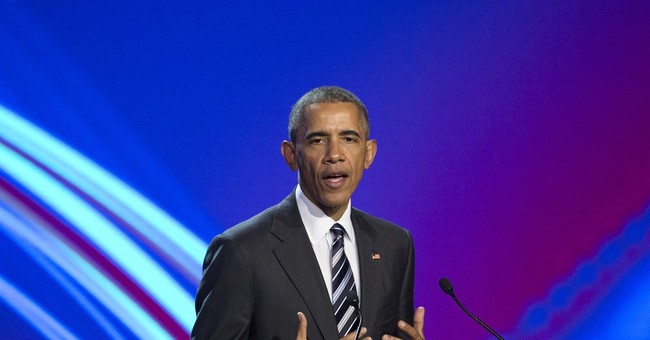 It comes as no surprise that in Barack Obama's last year as president, the U.S. economy has all but stopped growing.

Obama has had relatively little if anything to say about the economy lately, and with good reason. What can he say? Except, maybe, "I'm sorry. I don't know why this is happening."

The president is briefed by top aides each morning on major developments at home and abroad, so he couldn't have missed the Commerce Department's bad news.

Here's how Reuters' worldwide news service put it in their lead shortly after 8:30 a.m. Thursday:

"U.S. economic growth braked sharply in the first quarter to its slowest pace in two years as consumer spending softened…."

The gross domestic product, or GDP, the government's broadest measurement of the economy's annual growth rate, "increased at a 0.5 percent annual rate, the weakest since the first quarter of 2014…"

The Democrats have been ignoring the economy's troubles for years, without a peep of criticism from its leaders in Congress, or maybe even an apology to the voters about why Obama's economic scores have rarely broken out of the 2 percent growth range.

The Democrats paid a price for their silence, suffering big losses in the 2012 and 2014 congressional elections.

Hillary Clinton, on a fast track to become the Democrats' 2016 presidential nominee, has side-stepped the subject altogether, too. Maybe because she hasn't a clue how to turn the economy around, or has been busy raking in millions on the speaking circuit to utter a discouraging word.

It's not as if the Democrats were blindsided by the U.S. economy's decline. It was in a near free fall in the last three months of 2015 when it slowed to a bare 1.4% growth rate.

That elicited yawns from Obama's party leadership on Capitol Hill, despite a growing number of business layoffs, a sharp decline U.S. exports, and what Reuters said was a build-up in unsold merchandise "clogging up warehouses."

Another worrying sign behind the economy's decline is consumer spending which accounts for more than two-thirds of all economic activity.

It slowed to a tepid 1.9 percent, "the slowest since the first quarter of 2015 and marked a deceleration from the fourth quarter's 2.4 percent rate," Reuters said.

The Federal Reserve, notorious for issuing exaggerated forecasts of an economic comeback, was virtually mum as well about the economy's collapse.

Despite its past promises that the central bank will keep to its plan to raise interest rates in the months to come, the Fed left its benchmark rate unchanged Wednesday but said relatively little else -- except a terse statement that it would continue to "closely monitor inflation indicators and global economic and financial development."

While the Fed grudgingly acknowledged the economy's slow down, it's watered down response was disappointing.

The economy's sharp nose dive spoke volumes about its capitulation in the face of the Obama economy's dismal performance and the Fed's refusal to face reality.

The economy's lethargy can't and won't be solved by monetary policy alone, as former Fed Chairman Ben Bernanke often reminded us in the Bush years.

But we're not going to get those reforms from Obama, or a Democratic Congress, nor will they come from Hillary Clinton whose economic agenda has Big Government and Higher Taxes written all over it.

What we need now is a new, experienced leader who understands the power of capitalism to get our economy moving again by restoring America's entrepreneurial, risk-taking spirit.

Obama came into office telling us that capitalism didn't work, and he wanted no part of it.

"'The market will take care of everything,' they tell us…. But here's the problem: it doesn't work. It has never worked. It didn't work when it was tried in the decade before the Great Depression. It's not what led to the incredible postwar booms of the '50s and '60. And it didn't work when we tried it during the last decade. I mean, understand, it's not as if we haven't tried this theory," he said in a speech in Osawatomie, Kansas on Dec. 6, 2011.

"In 1800, the total population in America was 5.3 million, life expectancy was 39, and the real gross domestic product per capita was $1,343 (in 2010 dollars)," wrote Professor James Otteson of New York's Yeshiva University in a paper for the Manhattan Institute think tank.

"Such growth is unprecedented in the history of humankind," he said. "And it was "due principally to the complex of institutions usually included under the term 'capitalism.'"

Near the end of Ronald Reagan's successful presidency, that ended a severe recession in just two years, a liberal critic said he had "made capitalism fashionable again."

And once in office, Obama admitted to colleagues, that he aspired to be "a transformational leader" like Reagan.

That was not going to happen, especially to someone who still believes that capitalism is a disproven theory.