Gallup Poll: Donald Trump Has Highest Unfavorable Rating of Any Candidate Since 1992

Donald Lambro
|
Posted: Feb 03, 2016 12:01 AM
Share   Tweet
The opinions expressed by columnists are their own and do not necessarily represent the views of Townhall.com. 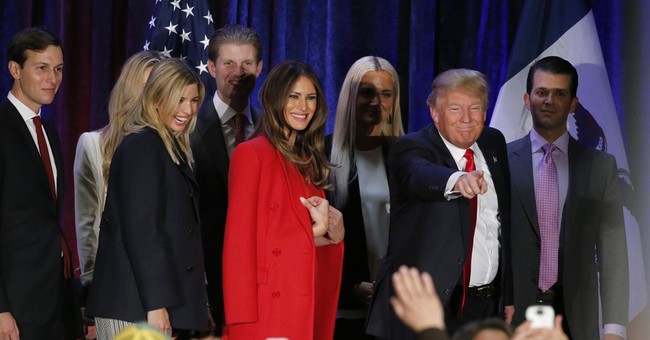 Former frontrunner Donald Trump came in second in Iowa for many reasons, but the biggest one is that he is widely disliked by most Americans.

A national survey by the respected Gallup Poll, which was ignored by the news media, found that Trump is the most unlikeable presidential candidate in either party in decades.

Trump is known for many things, his wealth, his gigantic ego and braggadocio, and his nasty insults of people he does not like. But most Americans have known him as the presidential candidate who led in all the polls for the GOP presidential nomination. Not anymore.

That was laid to rest last week by Frank Newport, Gallup's editor-in-chief, in an analysis he titled "Trump's Negative Image."

"Most political and media commentators have at this point installed Donald Trump as the GOP front-runner," he wrote last week.

"But this narrative tends to obscure the fact that Trump is the most unpopular candidate of either party when the entire U.S. population is taken into account -- and that he has a higher unfavorable rating than any nominated candidate from either of the two major parties going back to the 1992 election when we began to track favorability using the current format," Newport said.

"At this point (two-week average through Jan.27), 33% of Americans view Trump favorably and 60% unfavorably."

It the unfavorably that Newport focuses on, comparing it to the other presidential candidates in this election and past elections.

But Newport was curious to know how Trump's dismally unfavorable ratings "played out in the context of previous elections." So he went back compare them from 1992 to the current election.

"The bottom line is that Trump now has a higher unfavorable rating than any candidate at any time during all of these previous election cycles," he says.

And this conclusion "takes into account the fact that unfavorable ratings tend to rise in the heat of a general election campaign as the barbs, negative ads and heightened partisanship are taken to their highest levels," he adds.

Bill Clinton's highest unfavorable rating in 1992 was 49 percent in April and July of that year. President George H. W. Bush, his opponent, came closer to Trump's rating in October 1992, with a 57 percent unfavorable from Gallup.

Texas Gov. George W. Bush's unfavorable "never rose above 41% before the election" in November of 2000.

Barack Obama had a popular image throughout 2008, with an unfavorable rating no higher than 37%, while Sen. John McCain's unfavorable score was at 44 percent.

When Mitt Romney was running against Obama in 2012, they both had negative 48% ratings.

So the question is, can a presidential candidate who is seen as so unfavorably by a large majority of Americans -- 60 percent of them -- be nominated and elected by the majority of the Americans.

Right now, that seems in question in the GOP, with the narrow, come-from-behind win by Texas Sen. Ted Cruz in Iowa, with this large caveat.

Cruz, who has served in the Senate just a little more than three years, won Iowa's caucuses as a result of his support from the state's large, religiously evangelical community. But that's not going to be the case in a lot of other states.

Ask former governor Mike Huckabee of Arkansas and former Pennsylvania senator Rick Santorum who have both won Iowa's GOP presidential caucus before, but never went on to higher office after that.

Rubio dominated much of that event thanks to Trump's petulant decision to snub the show because he didn't want to subject himself to Fox News anchor Megyn Kelly who has strongly questioned him about his disrespectful and insulting treatment of women over the years.

Trump maintained that skipping the Des Moines' debate wouldn't hurt him because he was the program's biggest draw. Apparently, Iowa's voters thought otherwise.

But there was something far more important to Iowa's voters: their concern about the decline in religious values, according to entrance polls conducted at voting places.

The two top issues on which voters said they supported Cruz had to do with their beliefs as "born-again Christians" and that he was someone who "shares my values."

A recent Pew Research Poll found that many religious voters said Trump was among "the least religious" of any of the candidates.

His supporters, on the other hand, said he appealed to them because he "tells it like it is" and that he is "from outside the political establishment."

Recent polls have shown Trump with a significant lead in New Hampshire in the 27 percent range, followed by Cruz, Ohio Gov. John Kasich, former Florida governor and Rubio virtually tied at between 10 and 12 percent.

This means the GOP presidential campaign will likely last a while longer until one or more of the candidates can begin to show some broader strength in the key primaries to come.

After next week's New Hampshire contest on Feb. 9 comes the Nevada caucuses, and then the pivotal South Carolina primary, followed by Super Tuesday on March 1 where a dozen caucuses and primaries are at stake.

By that time, we should know the answer to the question

Gallup raises: Can Trump still win even though 60 percent of Americans don't like him?