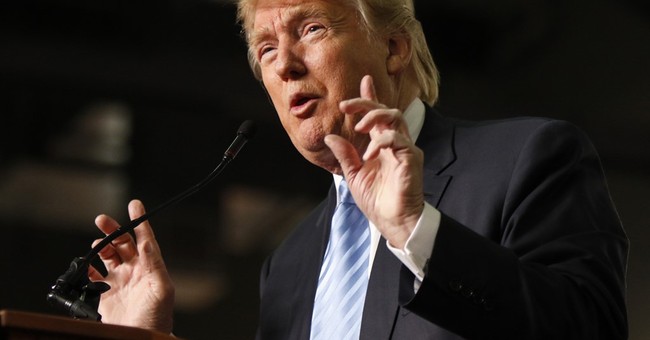 WASHINGTON - Political apprentice Donald Trump is attempting to do something no candidate has done before: win a presidential election by subtraction not addition.

It is, of course, an upside down, nonsensical campaign strategy, led by the mad Hatter candidate himself,that only Lewis Carroll could love.

His strategy is to attack, offend, bully, anger and insult as many minority voting blocs as he can. This includes large numbers of mainstream voters, i.e., women, offended by Trump's habit of using schoolyard names against them (like "fat pig"). Driving voters into the open arms of Queen Hillary herself.

He began by defining the 11.3 million undocumented Hispanics as rapists, murderers, drug dealers, and other criminals, declaring that he will have a nationwide police force round them up and ship all of them back to Mexico.

Hispanics are the largest ethnic minority group in the U.S. Obama won nearly 70 percent of their vote in 2012.

Even though Trump, living in his own delusional "Alice In Wonderland world, says he will "win the Hispanic vote."

You have one guess which presidential candidate will capture the Hispanic/Latino vote next year if Trump is the GOP's presidential nominee.

If Republicans are not competitive in the race for this pivotal voting bloc, they will surely lose the White House for many years to come.

The American Muslim vote is a great deal smaller, a mere two million or so. But it can be an influential vote in key states, like Florida, which remains competitive.

"More than six in 10 are immigrants and they come from 80 different nations. They're spread across the nation, and across tax brackets, and professions," The Atlantic said this week in an analysis of the Muslim vote.

"Even before Trump called for a total ban on Muslim immigration on Monday, it was a foregone conclusion that Republicans would lose the Muslim vote on 2016," the Atlantic said.

The only remaining question "is just how small a portion of the Muslim vote the eventual Republican -- be it Trump or someone else -- receives."

The American Muslim Alliance estimates that 60,000 Muslims voted for George W. Bush in Florida, "a state he won by mere hundreds of votes," the Atlantic said.

Anti-tax crusader Grover Norquist had urged Bush's campaign to go after the Muslim vote there, arguing that they were family-oriented, socially-conservative, and entrepreneurial, business-friendly politically, and thus a natural Republican constituency.

"George W. Bush was elected president of the United States of America because of the Muslim vote," Norquist said.

But there is no chance of getting their vote now if Trump heads the ticket, campaigning on his ban against Muslim's entering our country.

Since then, Muslim's have turned much more Democratic anyway. In 2008, Obama drew 89 percent of their support, which fell to 68 percent in 2012.

A 2011 Pew poll found that 70 percent of Muslims said they either identified with or leaned toward the Democrats. Only 11 percent said they were Republicans.

Clinton and her advisers lost no time in taking advantage of the controversy over Trump's Muslim ban, condemning it as "shameful" and "dangerous."

"Donald Trump has made a name for himself in this election by trafficking in prejudice and paranoia" she said.

"At a time when America should be doing everything we can to fight radical jihadists, Mr. Trump is supplying them with new propaganda. He's playing right in their hands."

But Clinton didn't stop there in showing her support for the Muslim community. One of her closest aides in the State Department and in her campaign, Huma Abedin, sent an e-mail to Clinton's campaign list attacking Trump's proposal, saying, "I am a proud Muslim."

But Trump and one other GOP presidential candidate weren't through with their anti-American Muslim crusade.

Former pediatric neurosurgeon Ben Carson said that no Muslim should be our president, reminding some of the days when some Americans said that about Catholics.

And Trump further suggested American Muslims should be registered and required to carry special IDs.

Right now, Clinton's largest lead in the presidential race is against Trump -- by 11 points among all voters.

According to a national MSNBC/Telemundo/Marist poll, she leads the Republican frontrunner by 52 percent to 41 percent.

Among Latino voters, the former secretary of state leads the real estate billionaire by a whopping 42 percent -- 69 percent to 27 percent.

To put these numbers into sharper perspective in the general election campaign for the support of minority voters, consider this:

In 2012, he soundly beat former governor Mitt Romney among these same voters by 71 percent to 27 percent.

It seems that Trump is attempting to improve on those losses.

In the game of American politics, every voting bloc and every vote matters.

The late Rep. Henry Hyde of Illinois, a wily vote counter and legendary Judiciary Committee chairman, once told me about "Hyde's rule on winning elections."

"You win by addition, not by subtraction," he said.

It's a rule that Republicans have broken in the last two president elections, and appear ready to do so again.