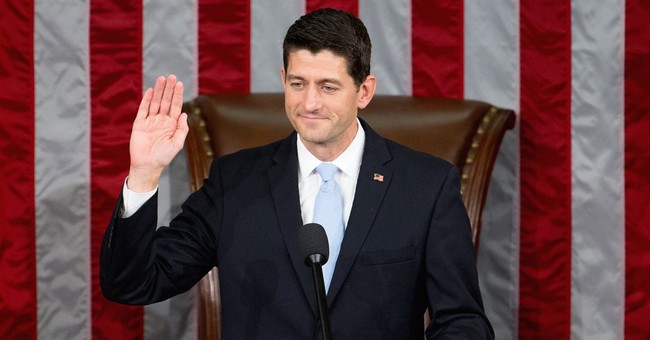 New leadership was put in charge of the House this week as Congress was "wiping the slate clean" to prevent another government shutdown, but little else has changed for the better.

At a time when the Republican Congress couldn't agree on little else -- including who should lead the House -- and Hillary Clinton's presidential bid was rising out of the ashes of multiple scandals, the GOP pulled into a safe harbor to prepare for the 2016 elections.

Rep. Paul Ryan of Wisconsin, one of the GOP's fastest rising stars, was elected Thursday to be the new House speaker at a time of widespread turmoil in his party and across Capitol Hill.

"Tomorrow, we are turning the page," Ryan said. "We are not going to have a House that looks like it's looked the last few years…. Our party lost its vision and we are going to replace it with a vision."

When the GOP's fortunes looked bleak and a band of hardcore conservatives threatened another government shutdown over raising the debt limit, outgoing Speaker John Boehner cut a deal with Senate leaders that ended the dispute for the rest of this year and next -- shoving the issue into 2017.

The budget deal called for an $80 billion increase in the next two years, to be equally divided between defense and discretionary spending. It cleared away a major obstacle to give Ryan maneuvering room to reunite his party and set forth the Republicans' election-year agenda.

Things were nowhere nearly as clear-cut and settled in the GOP's bitter battle for the 2016 presidential nomination -- as was evident in Wednesday night's two hour, slugfest debate in Boulder, Colo.

The debate was billed by its host, the CNBC business network, as a discussion of the major economic issues facing the weakening U.S. economy.

But there seemed to be relatively little overall focus on economic matters that virtually every survey finds are far and away the voters' chief concerns.

And the candidates angrily vented their frustration over that, blaming the incendiary questions by CNBC's panel of reporters, who were far more interested in starting a brawl than a detailed discussion about President Obama's weak, mediocre economy.

At one point, an irritated Sen. Ted Cruz of Texas drew a burst of applause from the audience when complained that he had enough of the gotcha questions.

"This is not a cage match," Cruz said. "You look at the questions: 'Donald Trump, are you a comic-book villain?' 'Ben Carson, can you do math?' 'John Kasich, will you insult two people over here?' 'Marco Rubio, why don't you resign?' 'Jeb Bush, why have your numbers fallen?'"

"How about talking about the substantive issues? Cruz

It's not at all surprising that most of the questions were of that nature. In nearly seven years of Obama's dismal economic record, CNBC's news staff has gone out of its way to avoid a critical examination of the Democrats' low-growth economy.

At one point, New Jersey Gov. Chris Christie had heard enough, too, when former Florida governor Bush was asked by one of the moderators about the fantasy sports game and regulated gambling.

"Wait a second," Christie said. "We have a $19 trillion in debt, we have people out of work, we have ISIS and al-Qaeda attacking us, and we're talking about fantasy football?"

As occurs every four years in these campaign debates, the subject of Social Security comes up, and it did in this one at some length -- pointing to the program's well-known fiscal troubles.

"Let me be honest with the people who are watching at home," former surgeon Ben Carson said at one point. The government has lied to you, and they have stolen from you. They told you that your Social Security money is in a trust fund. All that's in that trust fund is a pile of IOUs."

Christie underscored what most Americans must already know, that Social Security would become "insolvent" unless major structural reforms are made.

"It's not there anymore. The government stole it and spent it," the governor said.

It's hard to say what older Americans thought of all this as they watched at home.

Yes, Social Security taxes that are deducted each week from worker paychecks go into the general fund to pay the government's bills, including its benefit checks.

No one offered a solution, though one was proposed by a bipartisan commission appointed by President George W. Bush during his administration.

The co-chairman was the late Democratic Sen. Daniel Patrick Moynihan of New York who came up with a reform that would allow people over their working lives to put a small part of their Social Security taxes into an investment plan of blue chip stocks or safe high yield U.S. Treasury bonds that they would own and could leave to their heirs.

The government offers this investment plan to all of its employes, including the president, and it's as safe as the Rock of Gibraltar. Right now, no one can say that about Social Security.

There'll be many more debates to come in this election but no real leader has emerged to fix the deep problems that confront our country.

Right now, it is a disappointing lineup, that includes an insult-prone, TV celebrity, a brain surgeon who wants to replace the income tax with tithing, three untested, first term, freshmen senators, a former CEO who was fired, and four former or present governors.

And among the Democrats, a former First Lady with no accomplishments to speak of and a socialist who thinks all we need to do to get our country back on course, is get rid of all the billionaires and millionaires. Good Grief.