It's Time To Hit Obama Hard On His Rotten Economy 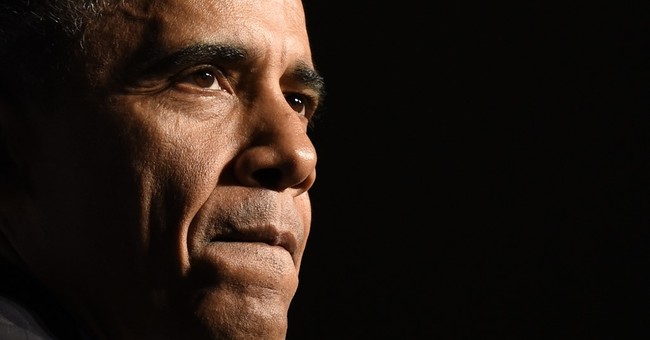 WASHINGTON - The Obama economy is tanking as we near the 2016 presidential primaries, handing the GOP the one, overriding issue they need to win back the White House.

But despite all of the bad economic data we've gotten this week, the economy still isn't getting the attention it deserves from the Republican candidates.

It isn't getting any attention from the Democrats, either, even though all of the polls show the economy, jobs and incomes are far and away the voters' chief concerns.

President Obama has been bending over backwards to impose job-killing environmental rules and regulations on businesses, but nary a critical word about the economy.

Hillary Clinton and the Democrats in Congress won't touch the issue for fear of being seen attacking Obama's biggest failure.

He needs to be hit really hard on this issue, because it has plagued our country since 2008, and is still said to be in "recovery" by the Federal Reserve which is reluctant to raise interest rates because of what it calls the "fragile" economy.

U.S. factory orders for long-lasting or "durable goods" declined 1.2 percent in September, a further sign of the manufacturing sector's weakness.

Worse, it turns out that factory orders in August fell by a sharply revised 3 percent instead of an earlier 2.3 percent percent. Is the administration playing fast and loose with its figures?

This means that our Gross Domestic Product, which is the largest measurement of our economy, will be weaker in the third quarter than previously expected, economists said.

A Reuters survey of top economists said they expected the nation's third quarter GDP to plunge to 1.6 percent, a severe decline from its 3.9 percent second quarter pace.

Meantime, the administration reported that new home sales fell in September to a 10-month low, another sign of a sharply slowing economy.

The retail industry has also been hard hit, as consumers have tightened their grip on their wallets.

Despite lower fuel costs, it is clear that Americans are pocketing the savings. Retail sales were flat in September, rising 0.1 percent, little changed from August.

A Bloomberg survey of 82 economists had forecast a minuscule median rise of 0.2 percent in retail sales -- with over half of the merchant categories showing declines in sales.

"The continued weakness in business spending, together with signs of a slowdown in hiring by companies, could raise further doubts on whether the Fed will raise interest rates this year," CNBC reported Tuesday.

Federal Reserve Board Chairman Janet Yellen has said repeatedly that the Fed will raise rates when the economy appears strong enough to weather the hike. Yet month after month, its verdict on the Obama economy has been that it's still too fragile to take that step right now.

The Fed began a two-day meeting Tuesday with all of the key economic data pointing downward.

Obama's roller-coaster economy is in a steep dive for the rest of this year at least, and very likely into next year's elections, too.

Ordinarily, that would spell deep trouble for the party in power -- particularly when it's been led by an unpopular president who can't move his job approval numbers out of the 40 percent range. And a golden political opportunity for a strong Republican contender to be swept into office on a promise to "put America back work."

But you can toss all of those political rules into a paper shredder this time around.

Hillary Clinton is offering Democrats and Democratic-leaners a third Obama term, and possibly a fourth, with a large heaping of socialist Bernie Sanders on the side.

After her performance in her party's first debate, her polls shot up to 54 percent. With Vice President Joe Biden out of the equation, she inherits his 16 percent, and no doubt a large number of Hispanic voters.

Meanwhile, the Republicans appear hopelessly divided, with no unifying big foot on the political horizon -- yet.

Real estate tycoon and TV celebrity Donald Trump, who is running on an ugly political platform of personal insults and a nauseating ego the size of New York, but a vague agenda that is short on detail.

Trump is in the lead right now, but breathing down his neck in Iowa is soft-speaking, former brain surgeon Ben Carson.

Everyone else is way down on the poll list or clinging to the bottom, but they aren't saying that much about the economy, jobs, or what a rotten position the Democrats have put our country in.

It shouldn't take the United States seven or eight years to pull our economy out of a recession (the average is two years), but Obama's showing us how to do it.

The Club for Growth, an economy-focused organization that raises money for conservative candidates running on a pro-growth platform, is putting out white papers on all of the GOP candidates.

The Club has deep problems with Trump and Carson. The former supported Democrats, including Clinton, in her campaigns, with his money, and bashes free market trade.

The latter "has promoted a de facto nationalization of private health insurers" and "a new government-run catastrophic care program."

That's the trouble with little-known candidates who have no public record to examine. And we know how that turned out, don't we.