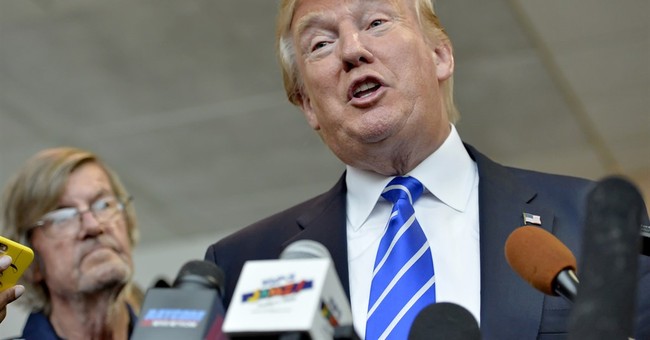 WASHINGTON - Ask the typical voter what pops into their mind when they think of Donald Trump, and they're likely say "illegal immigrants."

Ask them what Trump has proposed to fix the Obama economy, and chances are you'll get a blank stare.

That's because the bombastic billionaire decided first and foremost to focus his insurgent presidential campaign on an issue he believes will win him the GOP nomination next year. And polls show him well on his way to doing just that.

But is illegal immigration the biggest issue facing our country? It certainly is a problem that needs fixing, but is it the most important problem, as Trump suggested, when he began his campaign on that one subject?

When the Gallup Poll last month asked Americans what is the "most important problem" facing our country, it was way, way down on the list.

The truth is that "Economic Problems" (NET) tops the list, at nearly 40 percent, as it has throughout Barack Obama's presidency. A breakdown of that list includes "the economy in general," 14 percent; unemployment and jobs, 11 percent; the budget deficit and debt, 5 percent; the gap between rich and poor, 3 percent; followed by lack of money, 3 percent; then taxes, inflation, and wages.

"Immigration/Illegal aliens" polls only 8 percent, up from 6 percent in May.

Since Trump entered the race, he has touched on the economy and jobs, but only tangentially, boasting that he would be the greatest jobs president ever. But with little to back up his pompous boasts.

And even when he's offered some ideas about how to strengthen the economy, they haven't received very much attention. If they had, Republican voters would be shocked and Democrats would be cheering.

In recent interviews, Trump has proposed raising taxes on the wealthy and on capital investment income, and levying tariffs on imports.

This is about as far away from GOP economic policy as you can get.

In an economy that is desperate for investment capital for business expansion and start-up companies, raising taxes on capital gains and investors would be the kiss of death for economic growth.

Tariff taxes on imported goods would raise prices on consumer goods across the board, hurting businesses and middle-to-lower income Americans who struggle to make ends meet.

Those who remember the Smoot-Hawley Act in 1930 will recall how it raised tariffs on over 20,000 imported goods, which resulted in foreign retaliation that worsened the Great Depression.

Free-market economists and pro-growth champions on Capital Hill are shaking their heads in disbelief at Trump's proposed economic policies.

"This is a very dangerous moment, I think, for the Republican Party," said Stephen Moore, a former economic writer for the Wall Street Journal and a founder of the Committee to Unleash Prosperity which has been lobbying for tax reform, and less economic regulation.

"What Trump is saying about trade and immigration is a political and economic disaster. He's almost now making it cool and acceptable to be nativist on immigration and protectionist on trade, Moore told The Washington Post.

"That's destroying a lot of the progress we've made as a party in the last 30 years," he said.

Someone should tell Trump higher taxes will sandbag our economy and lower taxes will boost its growth. A few examples:

In 1960, John F. Kennedy ran on cutting tax rates "to get America moving again," an idea that was opposed by many in his own party who said it was a giveaway to the rich and would worsen the budget deficit.

Kennedy replied, "a rising tide lifts all boats" and by the end of the decade, the budget was balanced as a result of growing tax revenue derived from a stronger economy.

In 1980, GOP supply-siders sold Ronald Reagan on a similar tax cut plan that turned a severe recession into booming economy.

In a little over two years, the Reagan economy was scoring quarterly growth rates of 5.6 percent, 7.7 percent, 8.5 percent, and 7.9 percent. Let's see Obama do that.

In 1984, Reagan ran for a second term against Walter Mondale of Minnesota who carried only one state: His own.

Apparently, President Clinton learned the same lesson from Kennedy and Reagan when he signed a Republican-passed bill to cut the capital gains tax rate in 1997.

At the time, Democrats criticized his action, predicting it would result in higher deficits. But in the end, Clinton had the last laugh.

Capital gains tax revenues rose from $62 billion to $110 billion by 1999. The stock market's Dow Jones Industrial Average leapt from 7,000 to 10,000 and venture capital investment quintupled from $10 billion to $53 billion.

Now along comes Donald Trump who wants to erect high tariffs (i.e. taxes) on thousands of imported goods the same way Herbert Hoover did at the dawn of the Great Depression.

At the same time, Trump wants to round up 11.3 million illegal immigrants and deport them, then, sometime later, he says, bring some of "the good ones back." What is the cost of that to our economy, and to the U.S. Treasury? Trump doesn't say.

Most of these immigrants work, as day laborers, have income, and pay taxes (according to the Social Security Administration). And how does he find them as they blend into our economy? He doesn't say.

And what's it going to cost taxpayers to build a high wall along 1,954 miles of our border with Mexico? And where is he getting the money to pay for it., and does he know what that building at the end of Pennsylvania Avenue does and what purse strings mean?

Has he heard about the appropriation process? The bill will be in the hundreds of billions. And we all know what a great tourist attraction the Great Wall of China turned out to be.