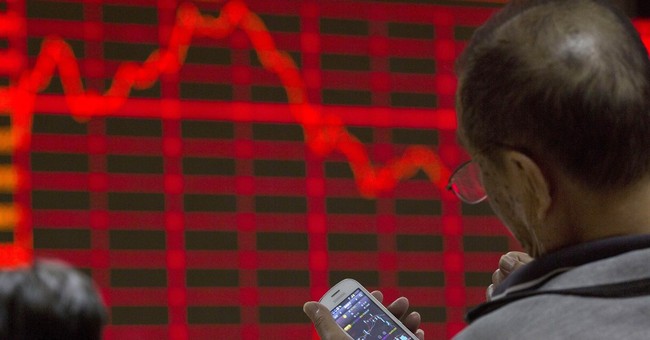 WASHINGTON - America's sluggish economy still looms over our land like a stationary dark cloud that shows no sign of moving away under the Obama administration.

Our nation's second quarter growth rate, as measured by its gross domestic product, came in at a mediocre 2.3 percent -- better than the first three months of this year when the economy barely grew at a sickly 0.6 percent, but nothing to write home about.

Many economists were forecasting a stronger economic revival nearer to 3 percent or more. But the economy was still being pulled down by the economic undertow of anti-investment, anti-growth, anti-job creation policies.

They include higher taxes on the economy, particularly investors, and the threat of more to come if Hillary Clinton is elected president. Plus increasing business regulation, from Wall Street to Main Street -- from job-killing minimum wage hikes to growing taxation on capital investment.

None of this should come as much of a surprise to most Americans in their daily lives.

Consumer confidence fell in July to its lowest level since September, said the U.S. Conference Board, a business research organization for our country's global companies.

The Gallup Poll this week announced similar declines in its economic confidence surveys, saying that its index "continued its gradual downward slide, reaching -14 for the week ending July 26. This represents a 10-month low."

Gallup said 32 percent of the Americans they surveyed told them that economic conditions were "poor," while 57 percent said the economy is "getting worse."

Meantime, in recent months there has been increasing evidence of Americans cutting back on spending at stores and restaurants.

"It certainly is a case of 'two steps forward, one step back' for the U.S. economy," economist Dan Greenhaus of BTIG said of last month's weak retail sales.

America's economy grew only 2.4 percent last year, a growth rate that many economists would define as weak, and certainly underperforming.

It's certainly performing significantly below the growth rate achieved in the Reagan years of the 1980s and the post-capital gains tax cuts of the Clinton years in the late 1990s.

Reagan had to deal with a severe recession where the jobless rate rose to 10 percent. But in just the third and fourth years of his presidency, the economy turned in fat quarterly growth rates of 3.2 percent; 5.6 percent; 7.7 percent; 8.5 percent; 7.9 percent; 6.9 percent; and 5.8 percent.

Compare that performance to Obama's record in his fourth year in office when the economy was growing by between 2.0 percent and 1.5 percent.

Former Florida Governor Jeb Bush has said that under his proposed policies, the economy will be growing by 4 percent a year.

Hillary Clinton hasn't given us a clue about the level of economic growth she hopes to achieve. In fact, she goes to great lengths to dodge the question entirely.

Instead, she says the economy should be measured by "how much incomes rise for middle-class households, not an arbitrary growth figure."

Voters may be surprised to learn that the front-runner for the Democratic presidential nomination thinks that the GDP rate – the government's broadest measurement of the U.S. economy's growth – is just an "arbitrary" number.

It is a disturbing sign that she doesn't know much about economics in general, and even less about what produces stronger economic growth and lifts wages.

If you listen closely to her speeches about this subject – about which it is clear she knows nothing about – you quickly learn that she hasn't a clue about how to grow an $18 trillion economy, or in John F. Kennedy's words "get America growing again."

Here, in one of her speeches about the economy, lifting wages and creating jobs, are what she thinks will do it:

But the IRS says they are doing that already, because wealthy taxpayers pay the lion's share of all tax revenue.

She talks of more investments in research and rules to encourage shareholder activism, paid leave, paid sick days, paid child care, but paid by whom? The government, taxpayers, employers? She doesn't offer much detail for her platonic agenda.

The U.S. economy, business expansion, new startups and job creation at all income levels depend upon capital investment. Tax it at higher rates, as she proposes, and you get less of it.

The late Jack Kemp used to say that you cannot have more employees without more employers.

Clinton says she will raise taxes on investment capital, impose sweeping new regulations on the economy, and vastly expand the size of government.