Obama's Legacy: 70 Percent of Americans Dissatisfied With Our Country's Direction 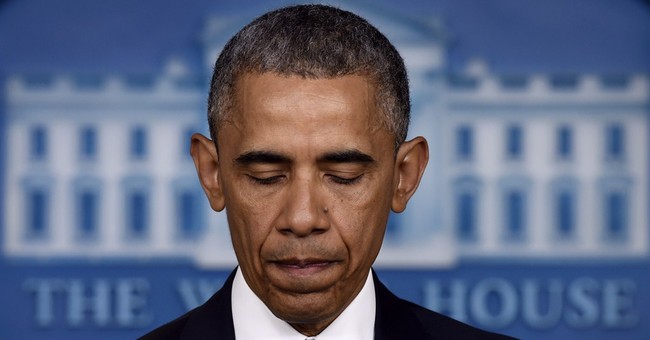 WASHINGTON - Anyone looking for signs that Barack Obama's presidency is running out of gas got a glimmer of hope this week from his daily schedule.

He traveled to Florida Wednesday for a tour along the swampy Anhinga Trail in Everglades National Park to talk about "climate change" or, as it is called by his friends, "Global Warming."

The last time I checked the top 10 issues the American people worry about most, climate change wasn't one of them.

I guess Obama didn't have anything on his schedule to occupy his day, so he flew down to Florida to grudgingly admit, "Yes, this winter was cold in some parts of the country." But, he insisted, storms, droughts and "longer wildfire seasons" showed that global warming was still very real.

His schedule wasn't jam-packed on Thursday, either, so he had time to welcome the Super Bowl champion New England Patriots to the White House for a photo-op.

Such is the life of a president without a serious agenda, whose administration will end in little more than 20 some months.

Meantime, the problems Americans worry about most -- sluggish economic growth, job scarcity, and government debt -- are now in the hands of the Republicans who run Congress.

And the word coming out of Capitol Hill lately is that the GOP's newly-oiled legislative machinery is up and running once more, and the days of gridlock, for the most part, are over -- at least for the time being.

The House and Senate have passed budget resolutions, and, wonder of wonders, they've been sent to a legislative conference between the two chambers to iron out their differences.

When Democrats ran the Senate, Harry Reid shelved every budget sent over from the GOP House, refusing to consider them. "We don't need a budget," he said.

So the government was essentially without a budget for several years, running on "continuing resolutions," until the GOP "budget sequester" slowed down spending.

But Reid is out of power and Sen. Mitch McConnell is the Majority Leader. Moving legislation and passing annual budgets -- such as they are -- are back in vogue.

And that's not all. Congress has passed the Medicare reimbursement bill, also known as the "doc fix," that pays doctor bills for the elderly.

A human trafficking bill is now likely to be passed, and there appears to be progress on the long-stalled trade bill that Democrats have blocked for years under orders from labor union bosses.

The Trade Promotion Authority, known as "fast track," is being moved through the Senate Finance Committee by Chairman Orrin Hatch. It carries a compromise provision that directs the administration to ensure that our trading partners "avoid manipulating exchange rates" through "cooperative mechanisms, enforceable rules, reporting, monitoring, transparency, or other means, as appropriate."

The bill is opposed by arch-protectionists, but it's likely to clear the Senate with strong GOP support. The vote is uncertain in the House where many GOP lawmakers are reluctant to give the president any more authority than he already has.

But Obama may be taking a page out of Bill Clinton's economic policy book when he won passage of the North American Free Trade Agreement in his first term.

Critics predicted that NAFTA would kill jobs, but by the end of Clinton's second term, the economy was soaring and unemployment had fallen to 4 percent.

Whatever happens in the upcoming debate, the fact that the measure is heading for a vote is a major advance for free trade and for getting the long-stalled machinery of Congress up and running again.

It remains to be seen just how far Republicans will be able to advance this legislative period in whatever is left of Obama's presidency.

The most ambitious promise in the GOP's agenda is broad-based tax reform to simplify the tax code, cleanse it of corporate welfare and apply the additional revenue to lowering the tax rates for businesses and individuals.

And they mean to bring it up for a vote before the 2016 elections as a sign of their determination to strengthen the U.S. economy, put people back to work and raise incomes.

Bills to do just that are now being shaped in the House Ways and Means Committee, chaired by Rep. Paul Ryan of Wisconsin, and the Senate Finance Committee, headed by Hatch.

Obama, and his party, remain stubbornly anti-tax cut, even though the three most successful tax cut agendas since the 1960s were signed into law by two Democratic presidents or enacted with the help of Democratic leaders.

President John F. Kennedy ran on a platform of across-the-board tax cuts, even for those in the highest income brackets -- saying "a rising tide lifts all boats."

Liberal critics said it would explode the deficit, but it led to a budget surplus by the end of that decade.

President Reagan cut tax rates across the board, the economy soared out a severe recession in two years, and he won re-election by carrying 49 states.

He enacted tax reform in his second term, cutting tax rates further, this time with the support of two Democrats: Rep. Richard Gephardt of Missouri and Sen. Bill Bradley of New Jersey.

Obama's tenure has been one unending rant in favor of higher taxes, which is why Gallup said last week that only 28 percent of Americans were satisfied with the country's direction.

He "has served through the longest stretch of low satisfaction of any of the past four two-term presidents," the polling firm said.

That will be his legacy.