Obama Sends Wrong Message By Not Marching In Paris 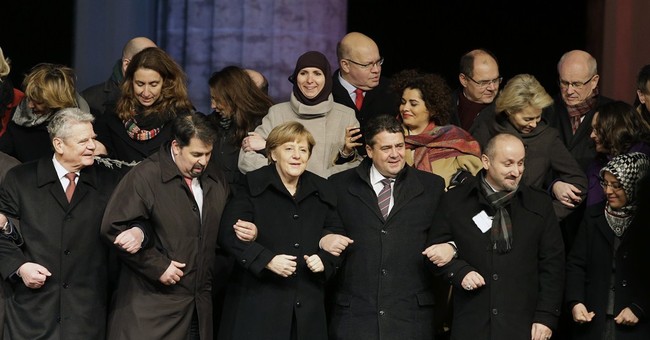 WASHINGTON -- It should be painfully clear by now that no one of authority is in charge at the White House, least of all President Obama.

His government is running itself, without any serious, detailed direction from the West Wing in the day-to-day issues and troubles America faces at home and abroad.

We saw that happen in the bungled, mistake-filled roll-out of Obamacare, where the left hand did not know what the right hand was doing. And many other times since then: the deadly Benghazi consulate attacks; the incompetent VA scandal; the politicization of the IRS that targeted voter groups who didn't support Obama; and a long list of other management disasters over the past six years.

We saw it again this week in the repeated apologies from the White House when the president didn't send a high-level official to Paris to demonstrate our solidarity with European leaders who marched in Paris to denounce the bloody terrorist attacks in the French capital.

What was Obama thinking as he watched heads of state from Europe, the Middle East and elsewhere march with millions of others in the largest demonstration in France's history? He wasn't thinking.

"I think it's fair to say that we should have sent someone with a higher profile," said Obama's press secretary Josh Earnest -- instead of just our ambassador to France.

The White House press corps wasn't content to accept his answer that the administration had simply made a little mistake, as they peppered him with questions, wanting to know why the president didn't go himself or at least send a high-level delegation in his place.

But Obama's chief apologist wasn't especially helpful on that question. He refused to say who was responsible for making that decision, but insisted it was "not a decision that was made by the president."

But why not? This was one of the most brazen terrorist attacks in years in a major world capital -- this time in the streets of Paris that came with a message that the United States is their next target.

Didn't it occur to Obama or his top advisers that how he responded to the brutal murders in Paris would be seen as a passive response to the war on terror? No. Instead, he felt it was enough for him to simply call a few European leaders, issue a brief statement -- without really leading.

That led to a rare debate in the Washington press corps about "a bungled bureaucratic process" in the West Wing that had again exposed Obama's uninvolved, aloof style in his interactions with our allies and adversaries in an era of global terrorist warfare.

Six years into this administration, the terrorists' armies have rapidly spread throughout the Middle East, into North Africa and, now, in Europe, growing stronger, more lethal and far better financed than ever before.

That has ignited sharp criticism of the president's failed national security policies here at home, led by two of his former defense secretaries who wrote tell-all books that attacked him for indecision and a failure to lead. And this week, the criticism of his absent leadership now appears to be coming from within his own administration.

"He sees (foreign policy) as a giant puzzle," one senior administration official told The Washington Post Tuesday, "an intellectual problem to be solved."

But what could possibly be puzzling about ISIS? They want to kill as many Americans as they can, and we've got to make sure that won't happen -- ever. If Obama sees this as an intellectual exercise, we are in deep trouble.

Under a barrage of testy questions from the press corps, who have become increasingly adversarial lately, Earnest struggled to offer a satisfying reason why Obama didn't go to Paris or send a high-level official in his place.

"I think the president himself would have liked to have had the opportunity to be there," he said. But his lame excuse was that there was a short window to plan for the trip, and his presence would have disrupted the march.

But German Chancellor Angela Merkel was there, front and center, among a host of other European leaders, as was Israeli Prime Minister Benjamin Netanyahu.

Harry Truman had a plaque on his desk that said, "The Buck Stops Here." Obama has replaced that ironclad rule with "It's somebody's else's fault."

Listen to what Jeremy Shapiro, a former senior State Department official, said about Obama's decision to pass the buck:

"These process mistakes happen when the top leader isn't pushing the system. The fact that the president didn't get on the phone (to his foreign policy advisers) and say, 'I've got to go,' makes it more likely the process will fail."

We are talking here about something much more than a march to show global solidarity in a war to exterminate the evil monsters who gunned down French journalists, a policeman (who turned out to be a Muslim), and other civilians.

This is an all-out war against a barbarian menace that is looking beyond Europe to the United States for its next terrorist target.

National security intelligence officials say that the threat of an attack is higher than it has been since the 9/11 Twin Tower air attacks. Indeed, the threat is worse as a result of new technology achieved by the terrorists that makes their bombing devices undetectable by most existing security surveillance systems.

Attorney General Eric Holder Jr., who participated at an international security conference in Paris this week, said on CBS's "Face the Nation" Sunday that the possibility of a "lone wolf" terrorist attack in the U.S. "frankly, keeps me up at night."

"American soldiers, we are coming, watch your back," one of their messages said.

When he was campaigning for a second term in 2012, Obama repeatedly said the al-Qaida terrorists were "on the run," their ranks had been "decimated," and that his rapid military withdrawal policies were working.

Now we know none of that was true.