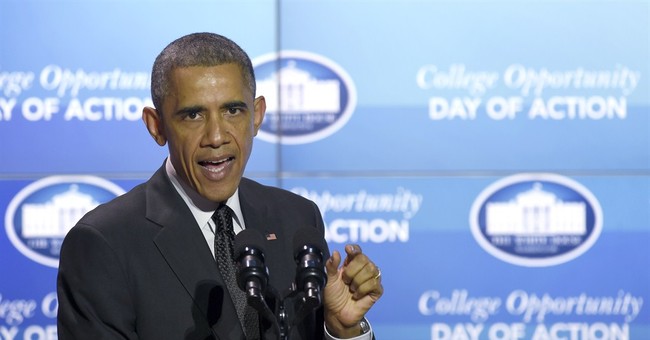 WASHINGTON -- The Democrats, who were in serious condition after being battered, bloodied and beaten in the midterm elections, are now on the critical list

Hillary Clinton, the party's frontrunner for the 2016 presidential nomination, is receiving poor reviews for her performance on the stump, speaking to a half-empty hall at Georgetown University this week. Words like "banal" and "bureaucratic" were used to describe her vacuous, messageless, issue-light speech.

At the same time, some Democrats are sensing that the former first lady and secretary of state is an empty suit, with little, if any, executive abilities behind her overinflated resume. She still has not addressed economic issues and jobs in any substantive way, despite the fact that Election Day exit polls showed they were the voters' top concerns.

Clinton may still be brushing up on the subject after her embarrassing gaffe at a Democratic Party campaign rally in Massachusetts when she said, "Don't let anybody tell you that it's corporations and businesses that create jobs."

After that eye-rolling blunder, more Democrats have begun thinking about challenging her for their party's nod. One of them is former Sen. Jim Webb of Virginia. He sharply criticized his party this week, warning that the Democrats have lost their message, "lost white working-class voters" and "turned into a party of interest groups."

Also this week, Democrats pulled the plug on the campaign of one of their last senatorial survivors, currently clinging precariously to life pending Saturday's runoff election. The Democratic Senatorial Campaign Committee has dropped plans to buy TV ads in a last-ditch effort to save three-term Mary Landrieu of Louisiana, the Deep South's last Democratic senator. GOP Congressman Bill Cassidy was expected to win the seat, further strengthening his party's hold on the Senate.

As in last month's elections, President Obama was clearly to blame for Landrieu's downfall.

But there was still more bad news for Democrats this week, arising out of their catastrophic election losses. A Gallup poll found that Americans now view the Republicans more favorably and that their "political allegiances have shifted toward" the GOP.

"Since then, Republicans have opened up a slight advantage, 42 percent to 41 percent, representing a net shift of five percentage points in the partisan gap," Gallup said.

"Americans are also now more likely to align themselves politically with the Republican Party than the Democratic Party," the pollsters said.

With the Democrats now in the minority on Capitol Hill, the Republicans are losing no time in taking the reins of power as they carve out their legislative agenda for the new Congress next year.

In the GOP-run House Wednesday, their focus quickly turned to the economy. Dozens of individual and business tax breaks were passed by the House with a lopsided 378-46 vote of approval. Those will allow businesses and individual taxpayers to claim deductions on their 2014 tax returns for research and development, business investment and expansion, energy and more. It is expected to pass the Senate next week.

Meanwhile, over at the White House, Obama and his staff were said to be reaching out to Democratic leaders in Congress -- something he has shown little interest in doing in the last six years.

With his so-called Affordable Care Act threatened with dismantlement by Republicans, and annual budgets likely to be tighter than they were when Reid and Pelosi ruled the roost, Democrats say they're suddenly getting a lot of phone calls from the West Wing.

House Democratic Whip Steny Hoyer of Maryland says he's been getting calls from Obama. "I've seen heightened outreach," he told The Washington Post. "To some degree we've become more relevant than we were before. Now he needs to rely on both houses to sustain a veto," Hoyer said.

But insiders say there is still bad blood in Democratic ranks on the Hill among members who blame Obama for their crushing losses last month and aren't eager to stick their political necks out for him in the legislative battles to come. That view essentially boils down to, "Yeah, you need us now, but why weren't you protecting us when we needed some political cover?"

Suddenly, Obama has begun talking about legislative issues like tax reform and trade expansion -- issues that Obama gave only grudging lip service to in the past six years. There he was on Wednesday, in a sea of CEOs from the nation's biggest corporations -- at a conference sponsored by the Business Roundtable -- talking up trade deals and tax reform.

Yet for six years, the administration dragged its feet on trade agreements to open markets for U.S. exports when the sluggish, underperforming economy needed it most. The chief reason: opposition from labor union bosses, who exerted their own veto at the White House. When the AFL-CIO barked, Obama saluted.

After the beating he was given on Nov. 4, the president seems to be more open to tax reform, but we've heard this song before. The 35 percent top corporate tax rate, which is the highest in the industrialized world, is a job killer. His capital gains tax hike has weakened business investment, the source of all new jobs.

Obama burned his bridges with a go-it-alone presidency, and now he thinks he can paper over the damage. But it's a little late for that. He's lost whatever capital he may have had in Congress and with the American people, including many in his own party.