The President Still Doesn't Have a Clue 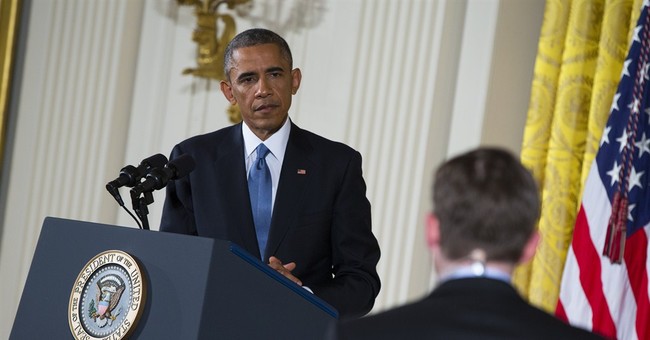 WASHINGTON -- President Obama and the Democrats were hit by a ton of bricks on Tuesday, and it couldn't have happened to a more deserving bunch of losers.

Even a ton of bricks understates what the voters did to Obama and his party. A political earthquake was more like it, and they're still reeling from the political aftershocks.

It was not just a massive repudiation of the president's harmful and unpopular policies on the economy and health care, and his incompetent, hands-off management of a wasteful, scandal-plagued government.

It was also a nationwide repudiation of the Democrats, who have remained cruelly silent throughout six years of a painfully sluggish, high-unemployment economy that their votes had inflicted on the country.

The voters demoted Senate Majority Leader Harry Reid to powerless minority status by putting the GOP firmly in control of that chamber and strengthening their majority in the House.

But the voters' crushing rejection of the Democrats was not only in the nation's capital, but in the governorships, too. Especially in deep-blue, tax-happy Democratic states like Maryland, Massachusetts and Illinois, pushing up the GOP's gubernatorial majority to at least 31, very close to historic levels in the modern era.

Equally important, the Republicans' sweeping victory extended to the state legislatures, where they took control in Nevada, Colorado's Senate, and House chambers in Minnesota, New Mexico, Maine, West Virginia and New Hampshire. At this writing, it means the GOP will control 67 chambers, a new record, and hold full political control of 24 states where the party will hold the governorships and state legislatures.

Heading into the final weeks of the midterm elections, Obama boastfully told Americans what was at stake in this election in a speech that had GOP officials cheering and Democratic strategists asking, "How could he be so stupid?"

"I am not on the ballot this fall. ... But make no mistake -- these policies are on the ballot, every single one of them," he said about his unpopular agenda.

His egotistical admission spread like wildfire throughout every GOP campaign team in the country. But what voters heard was that the Democrats on their ballots represented his policies, and they voted against them in a tidal-wave election that swept his party out of power and effectively killed whatever remained of his unfulfilled agenda in the final two years of his presidency.

Discouraged Democrats on Capitol Hill were no longer the least bit reticent about who was really responsible for their humiliating demise.

"The president's approval rating is barely 40 percent. What else more is there to say?" said David Krone, chief of staff to Senate Democratic Leader Harry Reid.

Yet the day after his party's defeat, there was Obama in the White House press room, battered, bloodied and beaten, but spouting the same snake oil remedies that Congress refused to enact and the American people had just overwhelmingly rejected.

"I hear you," Obama told the voters Wednesday. But according to Washington Post columnist Dana Milbank, "Their message went in one presidential ear and out the other."

While Obama was clearly the architect of his policies, he did not acknowledge his own unpopularity or accept any blame whatsoever for his party's losses. Nor did he for a moment suggest that maybe he ought to rethink his legislative proposals and change course.

"Do you feel any responsibility to recalibrate your agenda?" asked Associated Press reporter Julie Pace.

No, he suggested, falling back on the same-old small-bore ideas that have been widely discredited and were going nowhere in Congress.

"A minimum wage increase, for example," he replied, was "something I talked about a lot during the campaign."

When Congress asked the nonpartisan Congressional Budget Office, its fiscal and economic forecasting arm, to analyze Obama's proposals, it warned that his idea had one huge and painful drawback: Millions of struggling small- to medium-size businesses would be hurt by higher payroll expenses. At a minimum, the CBO forecast, Obama's higher wage mandate would kill between 500,000 to 1 million jobs.

Throughout this year, as he had in previous years, the president boasted that the economy was much improved, but exit polls Tuesday showed that for most voters, the economy and jobs was their No. 1 concern.

But when Obama was asked if he is now thinking about any new proposals, he sounded woefully unprepared, as if he had never given it any thought.

"Every single day, I'm looking for, 'How can we do what we need to do better?'" he said.

Then, an exasperated Ed Henry of Fox News said, "I haven't heard you say a specific thing during this news conference that you would do differently."

Obama, who hasn't the faintest idea what he could do differently, said it would be "premature" for him to answer that question. He wanted to "hear from the Republicans" first when they meet in the White House.

But the Republicans' agenda by now is pretty well known. They want to pass a revenue-neutral tax reform bill to cleanse the tax code of costly corporate welfare and other tax loopholes in exchange for lowering income tax rates across the board to accelerate faster growth and job creation.

They want to re-enact fast-track trade authority to open up new export markets for American goods, legislation that Obama and the Democrats have blocked since day one. U.S. exports fell further last month, weakening economic growth.

They want to approve the Keystone XL pipeline that the president has blocked, preventing thousands of jobs from being created. And repeal key parts of Obamacare that are hurting businesses, stunting job growth and raising health insurance premiums.

Senate Republican leader Mitch McConnell and House Speaker John Boehner will lay this out when they meet on Friday.

Only this time, the Republicans are holding all the high cards, and Obama has an empty hand.