Obama Leading from Behind in the War Against Islamic State Terrorism 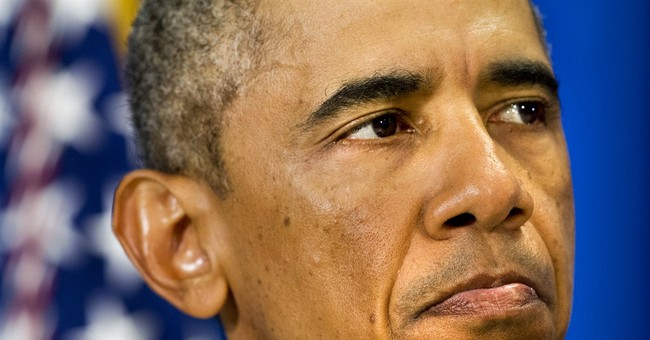 WASHINGTON - There can be only one response to the barbaric beheading of American journalist James Foley by Islamic State terrorists. We must hunt them down and kill them.

President Obama said as much in his brief remarks in the wake of the terrorists' grisly video that showed Foley's execution by a masked jihadist who spoke with a British accent and is believed to be a British citizen.

The United States will "do what we must to protect our people," Obama said Wednesday. "We will be vigilant and we will be relentless" in bringing them to justice.

No sooner had the president condemned the killing of the photojournalist than the administration revealed that Special Operations commandos had unsuccessfully tried to rescue him along with several other Americans earlier this summer in a high-risk ground operation in Syria.

Unfortunately, it turned out the captors and their captives had left the site. But U.S. officials who were authorized by the White House to discuss the mission told reporters that "a good number" of the remaining terrorists were gunned down in an attack that was described as a "fierce firefight."

In its video, the Islamic State said Foley's murder was in direct response to the U.S. airstrikes on their forces that have killed countless terrorists and driven them back from their assault across Northern Iraq.

But the U.S. air war against Islamic State's armies has, if anything, been escalated, with 14 more airstrikes against terrorist forces on Wednesday. Since August 8, there have been at least 84 major attacks by U.S. war planes.

Foley's murder, and the terrorists' threats to kill its other captives if U.S. bombings continue, has escalated the war against terrorism and moved it to center stage again in the national security arena -- especially among U.S. allies who have been reluctant to get involved.

The secret special forces rescue operation has for the first time moved U.S. military operations, however briefly, into Syria, after Obama's long resistance against getting involved in that country's civil war.

As for Obama's promise to withdraw completely from the Iraq war and bring all of our troops home, the stepped up terrorist offensive there has forced him to step away from that policy, at least for now.

While the Islamic State armies have been seizing more and more territory over the past year, the president and his advisers stubbornly resisted calls for a more aggressive response to the terrorists' offensives across much of the Middle East.

But as the crisis worsened in Iraq, Obama grudgingly began to change course, though at first insisting that his decision to send additional forces into Iraq to protect U.S. personnel in our embassy and consulate there was a very limited and temporary one.

However, as the insurgents intensified their offensive and their armies were on the brink of attacking Baghdad and threatened to blow up the Mosul Dam, endangering U.S. personnel in the area, he's been slowly, grudgingly sending in more troops.

Administration officials, citing an urgent request from the State Department, said that more troops may be sent in, possibly another 300 or so, to strengthen U.S. embassy security in Baghdad.

That would increase the number of ground troops in Iraq by well over 1,000 and counting.

Meantime, U.S. allies were expressing alarm over the threat that the Islamic State terrorists pose. Not only in the Middle East, but, eventually, to their own countries.

Britain's Prime Minister David Cameron chaired an emergency meeting of his ministers Wednesday morning. He told the BBC, "it looks increasingly likely that" Foley's executioner "is a British citizen."

A number of the terrorists were believed to be British citizens, leading Foreign Secretary Philip Hammond to warn that "many of these people may seek at some point to return to the U.K, and they would then pose a direct threat to our domestic security."

French President Francois Hollande proposed that the Western alliance immediately meet to plan a coordinated offensive against the Islamic State. "We have to come up with a global strategy to fight this group," he said.

Even Germany, which had been non-interventionist from the start, now says it will send weapons to help the Kurds repel the terrorists.

So it appears, after many months of leaderless inaction or only limited responses, by the U.S. and our allies, that the West may be slowly waking up to the seriousness of the renewed terrorist threat that now faces all of us.

A letter from the Church of England to Prime Minister Cameron may have said it best when it flatly declared that "we do not seem to have a coherent or comprehensive approach to Islamist extremism as it is developing across the globe."

These well-armed, well-trained Islamist armies did not suddenly appear overnight. They have been building their fire-power and plotting their strategy for several years now, while the Obama administration looked the other way and told us that terrorism had been defeated.

When ISIS forces swiftly moved from Syria into Iraq, seizing Mosul, piercing Kurdish territory and moved toward Baghdad, encountering little effective resistance along the way, the administration was genuinely surprised.

Where was the leadership during all of this? Only a few lonely, unheeded voices, led by Arizona Sen. John McCain who stood alone on the Senate floor decrying the Obama administration's inaction and timidity.

And if you think this is a war that is limited to the Middle East, think again. The terrorists' growing ranks include not only British citizens, but Europeans and American citizens as well.

According to U.S. intelligence officials, the barbarians who have slaughtered, tortured, and raped thousands of innocent men, women and children, and who killed James Foley, are plotting to bring their war into our homeland.