What About Cutting the Rest of the Government Down to Size? 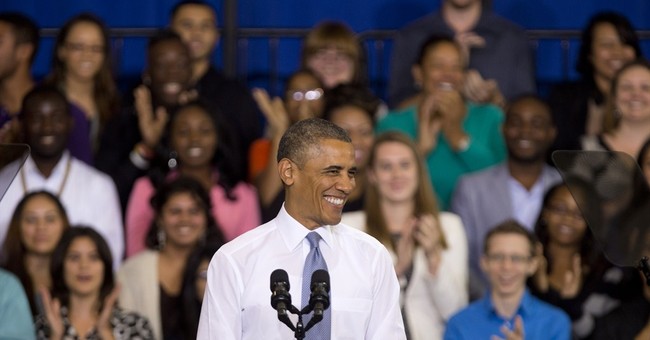 Somewhere in the contentious debate over defunding Obamacare, we seem to have lost sight of the much larger need to sharply reduce the size and cost of government from top to bottom.

Don't get me wrong. If Obamacare, the most unpopular federal program in decades, is not repealed and replaced with something better that will control health care costs, it will add trillions of dollars to the government's budget over the ensuing years. So it's a key target in the big spending battle.

But that, as we're learning this week, is not easily done because the Democratic-controlled Senate won't approve a House budget provision to do so, and even if it did, there are not enough GOP votes to override President Obama's certain veto.

That battle will play itself out over the coming days. But what about the larger, mostly forgotten issue, of cutting the government's bloated, unsustainable budget down to a far more affordable size?

The annual federal budget is moving inexorably toward the $4 trillion mark under President Obama's policies and we haven't yet officially begun the enrollment process for Obamacare which begins next week.

The automatic sequester cuts will continue to slice $85.4 billion in defense and other discretionary spending (though only $42 billion in cash outlays). But the Congressional Budget Office says total outlays will continue to rise each year by an average of $238.6 billion.

In other words, we've got a huge spending crisis facing us right now, and in the years to come, that has somehow been pushed out of Congress's collective mind. That is, if it has one.

Over the course of my career as a Washington reporter and as an investigative columnist, I've spent a great deal of that time as a critic of excessive, needless government spending.

In 1980, I wrote Fat City - How Washington Wastes Your Taxes. That book began with this sentence: "Our federal government has become a bloated, extravagant, paternalistic, remote, cluttered, disorganized, inefficient, frivolous, duplicative, archaic wasteland."

The 1980 deficit was over $40 billion, minuscule by today's numbers, and the government's debt was running around $839 billion. Interest payments on that debt were $57 billion.

Of course, in the last three decades it has gotten much worse. So here we are with federal spending skirting $3.6 trillion a year, a string of $1 trillion-plus budget deficits over the previous four years, and total debt nearing $17 trillion.

Nevertheless, the federal government was growing at an unprecedented pace at the time I began writing a string a books about curbing spending expenditures, digging into federal audits and congressional investigations into waste, fraud and abuse.

Before Fat City, I had written a more modest book that looked at just 50 unneeded federal programs costing $25 billion. They ran the gamut from the Interstate Commerce Commission to the Civil Aeronautics Board to something called the Congressional floral service. These three have since been abolished.

The title of that tiny book was The Federal Rathole, so named because the government auditors I interviewed kept telling me that all too often bureaucrats were "pouring money down a rat hole."

In a newspaper editorial, The Wall Street Journal said, "If the title isn't all it could be, neither are the agencies Mr. Lambro cites."

Fat City poked its nose into 100 departments, agencies and other spending programs that were wasting more than $100 billion a year. Most of them are still there, waiting for a new president and a frugal Congress to either eliminate, consolidate, privatize or cut them to the bone.

But that's not going to happen under President Obama who has never uttered a discouraging word about any of the domestic agencies and programs in his administration or their budgets. He likes big government and wants it to grow even bigger, which it has over the past five years.

This year, his government will run up an estimated three quarters of a trillion in debt. And it is estimated that when his term ends in January, 2017, he'll leave behind a huge mountain of debt that will take untold generations to pay off, and an even more precarious economy than we have now.

Fixing this fiscal mess will not be easy. As things stand now, the annual budget-making and appropriating process in Congress is broken. House Republicans have regularly been sending proposed budgets over to the Senate where they've fallen into a black hole, never to be seen again.

Senate Democratic Leader Harry Reid has even said "we don't need a budget."

Throughout much of our history, the House has drawn up appropriations bills, and sent them over to the Senate for their deliberations. Then the appointed representatives of the two chambers meet in a conference committee to iron out their differences in one bill and Congress passes it.

Senate Democrats, refusing to consider the budget cuts proposed by the GOP, have turned their back on that age-old process, preferring to lurch from year to year in what are called "continuing resolutions" to keep the government funded.

This week, the Senate is debating the House resolution, which contains the provision to defund Obamacare. It will delete that provision and send it back to the House, telling them "the ball's in your court. Take it or leave it.

We need to get back to "regular order" and the annual appropriating process that exerts tighter control over what has clearly turned into irresponsible, runaway spending.

As for reducing the size and cost of government, that is going to require a new, reform-minded president who runs on a platform of cutting, consolidating, and overhauling a wasteful, inefficient, duplicative, archaic bureaucracy that we can no longer afford to support.