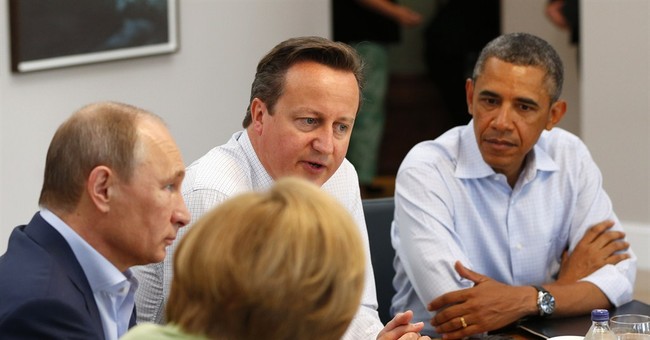 It is a well-known axiom of presidential politics that when things aren't going well at home, chief executives go abroad.

With his presidency beset by a wave of scandals -- from the shocking politicization of the IRS to damaging national security leaks to his declining job approval ratings, President Obama fled town this week for a European tour. Surely, his once-legendary popularity abroad would give him a much needed boost at home.

But Obama found that the political climate wasn't much better there than it was back here. Not only did the nasty scandals follow him overseas, but he found that he wasn't the rock star he was in his hey-day.

Indeed, a Gallup poll in March found public approval of U.S. leadership in Europe had plummeted 11 percentage points since his first year in office, to 36 percent. Half of that decline was in the past year alone.

"Europe's love for Obama fades," a Washington Post headline blared Monday as he flew across the pond to Northern Ireland for the G-8 economic conference.

"Obama will be confronting the diplomatic fallout from his action and inaction on some of the most urgent concerns of his European counterparts," the Post said.

There was his long, indecisive, timid delay over whether to support the Syrian rebels in their fight to overturn the brutal regime of Syrian President Bashar al-Assad that has frustrated allied leaders in France and Germany.

Then there's the National Security Agency's telephone and Internet surveillance program disclosures that has angered European leaders, especially German Chancellor Angela Merkel. And also Obama's stepped-up use of the terrorist-killing drone program, launched under George W. Bush's presidency, that has dismayed Europe's leftists who once cheered his presidency.

Not any more. A critical story from France's Le Monde newspaper ran under the headline, "George Obama and National Security."

The top issue at the G-8 gathering was of course the economy. Much of Europe is in a recession with an unemployment rate at 9 percent or higher. But the tepid U.S. recovery, with unemployment nearly 8 percent, hardly suggests that Obama has the answers to Europe's sagging economy.

"We expect that G-8 leaders will express a consensus that growth and jobs are a top priority," Caroline Atkinson, senior director for international economic issues at the National Security Council, said last week.

But Obama rarely talks about either economic growth or jobs, except when he insists that more than 500,000 manufacturing jobs have been created under his policies since 2010. But economic growth is barely running at 2 percent, and his jobs claim was declared totally bogus by Post fact checker Glenn Kessler who gave the president "Two Pinocchios" for dishonesty.

"[T]he fact remains that manufacturing employment is still about 600,000 jobs smaller than it was when he took office," Kessler reported Sunday.

Obviously, no one at the G-8 meeting was looking to Obama for economic leadership to pull Europe out of its slump -- not with his sub-par record.

There was a time when Europe looked to America's stronger economic growth to lift its economy onto a higher track, but not now. This wasn't Ronald Reagan marching into a second term with the U.S. economy growing by 6 percent and job creation soaring in the wake of across-the-board tax cuts.

Nevertheless, job one on the G-8's economic agenda was a new trade agreement between the U.S. and the 27-nation European Union.

Yet, over the course of Obama's presidency, he's shown his political devotion to the AFL-CIO by giving the cold shoulder to new trade deals. Sure, he gave the trade issue lip service Monday, but don't look for any real leadership on that score.

There was little or no serious expectation that Obama was going to lead America's European allies on the thorny foreign policy and military conflicts in Syria or Iran.

He had diddled and delayed over the civil war in Syria while Assad killed an estimated 93,000 Syrians in the past two years in an attempt to quell the rebellion.

Now in the eleventh hour, shortly before the G-8 powers met, he meekly decided to give the rebels some light arms and other benign assistance -- hardly a match for Assad's vaunted air power and, we now know, his large supply of deadly chemical weapons.

Obama came to the meeting hoping to produce a break in the unending Syrian conflict, but after an unproductive meeting with Vladimir Putin, Assad's chief arms supplier and ally, the icy Russian president made it clear he wasn't interested. "Our opinions do not coincide," Putin said.

Neither was there any hint of a break-through between the U.S. and Hassan Rouhani, the newly-elected Iranian president who is touted as "a moderate" reformer, but not on the issue of its nuclear enrichment program and its ongoing development of nuclear weapons.

Obama was elected on the dubious pledge to sit down and negotiate with Iranian leaders over the long-standing nuclear impasse, but that's not going to happen, Rouhani indicated this week.

"All should know that the next government will not budge defending our inalienable rights," he said defiantly in Tehran on Monday. So much for this so-called reformer.

Obama's road trip may have gotten him away from his domestic troubles here at home for a few days, but they'll be waiting for him with a vengeance when he returns.

As for the early reviews of his European tour, let's just say they weren't anything to write home about.