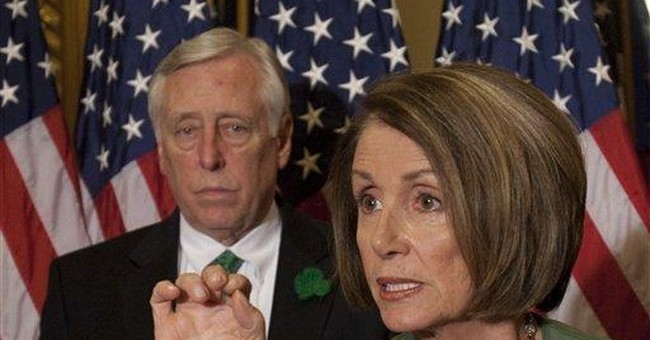 WASHINGTON -- The Democratic Congress passed an $18 billion jobs bill last week in the dubious belief that this will have a big impact in a $14 trillion economy that lost 36,000 jobs in February.

With unemployment still skirting 10 percent -- nearly 17 percent if you include people who have given up looking for work or had to take part-time employment -- it's clear that this relatively tiny bill was sent to President Obama more out of frustration than out of any sincere belief it was going to make a dent in the growing number of jobless Americans.

Facing forecasts of persistently high unemployment for the rest of this year, the administration and Democratic leaders were still throwing more money into so-called "jobs" bills in the hope that something will work, and if it didn't, at least demonstrating their concern about what is turning out to be an anemic and jobless recovery.

Indeed, Democrats signaled they didn't have a lot of faith in last week's $18 billion bill. It will be followed by another $150 billion jobs spending bill pending in the Senate -- on top of the nearly $800 billion spending bill they enacted last year, much of which has not been spent, and won't be, even by the end of this year.

You do not need a doctorate in economics to know that such a tiny sum of money (in comparison to a nearly $4 trillion federal budget) isn't going to create a ripple in a workforce that numbers more than 150 million people.

But the few tax breaks contained in this latest bill aren't going to create many jobs. Employers would receive a $1,000 tax credit and a break from paying Social Security payroll taxes for the rest of this year for each worker they hire.

That isn't a meaningful incentive in an economy where consumers aren't buying much, cash registers are nearly empty and factory orders are few and far between. If business is poor, employers cannot afford to hire and won't until conditions improve.

"Any company that can't afford to hire today still won't be able to hire," said Rep. Tom Price of Georgia, chairman of the conservative Republican Study Committee. "Calling this a jobs bill is pure fraud."

Making matters worse, these tax breaks come with some sticky strings attached from an administration that wants to micromanage everything in our economy. New workers have to be unemployed for at least 60 days. You get that tax credit if the hired worker stays on the job for at least a year (even if he can find a better job?).

As in every Democratic jobs bill, this one contains more spending for federal highway funding, among other things. The $150 billion jobs bill waiting in the wings calls for still more government spending for welfare and safety-net programs such as Medicaid and a one-year extension of COBRA health benefits and unemployment compensation -- not a good sign that Democrats think this recession will end anytime soon.

The $154 billion House version of this bill is filled with more spending, too, on infrastructure programs and public works, and for assistance for the poor.

What is tragically missing from the Democrats' jobs bills are the kind of pro-growth, pro-job tax cuts to help boost the bottom line for businesses still struggling to survive in a down economy -- for small businesses, in particular. They do not need, nor can many use, tax credits for hiring. They need to keep more of their earnings to survive and to grow before they can begin hiring again. And government can help by reducing their tax rates.

No-nonsense economist Peter Morici of the University of Maryland's School of Business succinctly diagnoses the problem with the Obama economy: "To add jobs, businesses need customers and capital. No customers, no capital, no jobs."

Capital formation, derived from profits and investment, are completely missing from the administration's vocabulary and its economic policies. Democrats on Capitol Hill never utter these words, nor include incentives for them in their bills.

Instead, the Democrats' jobs bill and Obama's economics are all about redistribution of wealth. But dividing the nation's economic pie into smaller slices will not produce growth, only stagnation, and fewer jobs and even fewer employers. And that's what we are seeing now and the promise of more redistribution to come when the Bush tax cuts are allowed to expire at the end of this year.

"The American economy is at sea," Morici says, "without a rudder or compass."

Until we implement policies to unlock risk capital, through lower capital-gains taxes, boost business investment through lower corporate tax rates, and cut individual tax rates, especially for small businesses, the American economy will not reach its true potential for growth, prosperity and jobs.