The Political Pendulum Swings to the Right 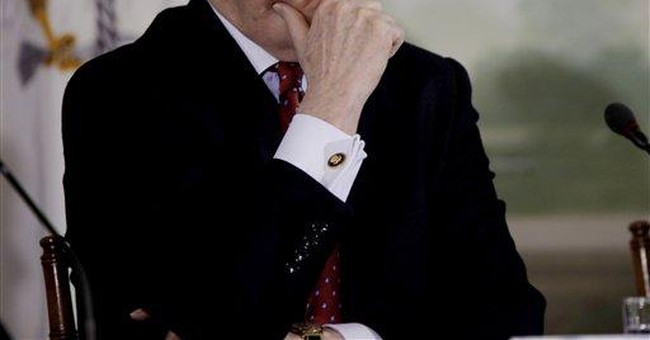 WASHINGTON -- Asked for his take on the nation's sharp right turn after its leftward lurch under Barack Obama, Heritage Foundation founder Edwin Feulner replied, "The political pendulum always swings back."

The longtime president of America's foremost conservative think tank has seen many presidents come and go, but he has never lost his deep and abiding faith in an informed and aroused electorate.

Heritage, with its vast army of conservative analysts, researchers and experts in multiple fields, spends its multimillion-dollar budget informing Americans about many things, especially the benefits of a free-market economy and the threats that big government, excessive taxation and overregulation pose to our freedoms and our economic future.

But the one lesson Feulner said he has relearned lately is that "there are no permanent victories or permanent defeats in Washington. It is always a permanent battle" of ideas.

Obama was able to convince an angry, frustrated and fearful nation that government was the answer to all our concerns, but that myth lasted less than a year before the electorate rebelled against the direction he was taking the country.

Feulner quoted Thomas Jefferson in the late 1700s when the young nation seemed to be moving in the wrong direction for a time, raising taxes and enacting the Alien and Sedition Act that restricted freedom of speech.

"The spirit of 1776 is not dead. It has only been slumbering," Jefferson wrote. "The body of the American people is substantially republican. But their virtuous feelings have been played on by some fact with more fiction; they have been dupes of artful maneuvers, and made for a moment to be willing instruments in forging chains for themselves. But time and truth have dissipated the delusion, and opened their eyes."

"That's what is happening today across the body politic," Feulner said in an interview. America has taken a wrong turn in recent years, and our country and its economy have become "less free."

The most alarming manifestation of this can be seen in the 2010 Index of Economic Freedom (www.heritage.org/index/), which shows that the United States has slipped among the economies of the world.

The U.S. economy still remains in the top 10, "but the score went down to such an extent that it went from the 'free' category to the 'mostly free' category," Feulner said.

The index's point system rates any country scoring 80 or higher a free economy, but the United States fell into eighth place with a score of 78.0. Canada, just ahead of us at 80.4 points, "is now the freest economy in North America. Great Britain, for the first time, fell out of the top 10."

Though an optimist by nature, Feulner believes "it's going to get worse for the U.S. There have been decreases in financial freedom, monetary freedom and property rights."

On the brighter side, the index shows that "the number of countries moving upwards with more economic freedom still exceeds the others moving backward like the U.S," he said. Nonetheless, he added, "You've got countries like Denmark and Chile right behind the United States that could easily go past us."

America's economic future is especially threatened by the Obama administration's hyper-regulatory agenda that is determined to tax anything that moves. And Feulner regrets that his think tank was not more relentless in making the arguments for the critical role that lower tax rates play in a growing economy.

When Ronald Reagan left the stage and tax-cut crusader Jack Kemp died, the right lost its strongest advocates for free-market economics. The Heritage Foundation played a major role in the tax-cut revolution that led the 1980s out of a deep recession, but Obama's election showed once again that "there are no permanent victories," Feulner said.

"I kick myself in the fanny every once in a while. I should have been over there trying to figure out who Jack Kemp's successor was in terms of carrying on the battle for supply-side tax cuts," he said.

He is similarly rueful about the homeownership policies and declining lending standards under the Bush administration that led to the present economic catastrophe. "We should have kept up the drumbeat over the years. We did every once in a while, but not consistently about why this was bad policy."

Obama's election, on a very liberal agenda, convinced Feulner that Heritage had to reconnect with the grassroots. In the past year, he and his think-tank warriors have hit the road, establishing community committees in cities around the country to promote tax cuts and other free-market ideas.

The anti-tax, anti-big-spending tea-party movement has given new life and energy to the conservative cause, he told me. "This is really a genuine grassroots reaction to the excesses of these inside-the-Beltway know-it-alls who think they know what's good for the country better than individuals citizens know for themselves.

"I still believe America's best days are ahead of us," he said. "We'll come back."