Let the RNC Chairman Do His Job 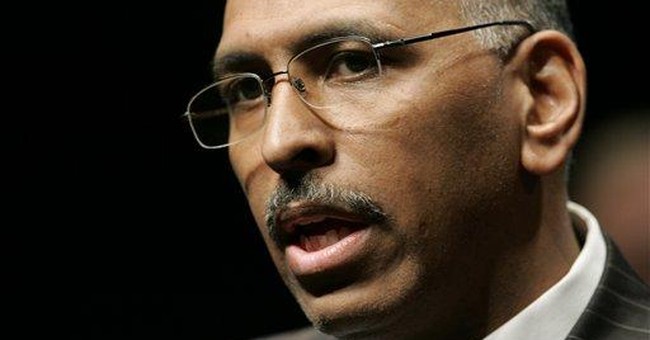 WASHINGTON -- If the latest family spat within the Republican National Committee about Chairman Michael Steele is ever turned into a play, it should be titled "Much Ado About Nothing."

The story so far is that a few disgruntled RNC members (some of whom are whining that Steele never calls) have complained that he is giving paid speeches to professional and trade organizations that want hear his message. Like Ronald Reagan, the former Maryland lieutenant governor has made his living on the chicken-dinner circuit, delivering inspirational speeches, and he has continued doing that on his own time when he is not traveling the country speaking to any and all Republican Party audiences -- and other political groups -- that hear him free of charge.

In other words, his full-time job is chairman of the party, but that in no way forbids him from adding to his income in his off-hours -- as many Republican national chairmen have done before him. He is said to be paid between $10,000 and $20,000 -- low by Washington standards -- but there is no evidence he has trimmed back the job he is doing for the RNC, which is to deliver his party's message and raise money.

Steele had a bit of a bumpy period in the beginning of his tenure, but has generally acquitted himself well on the speaking circuit and on TV and radio. He has made hundreds of speeches and other appearances as chairman and has raised tens of millions of dollars for the party in the past year in the midst of a deep recession and a post-election period when contributions tend to fall off anyway. The RNC has had a record number of new donors for an off-year election cycle, which is remarkable.

But his pipsqueak RNC critics, who apparently have nothing better to do than beat up their party chairman, are also attacking him for writing a book that urges his party to stick to its core conservative principles and values and praises the rise of the tea-party activist movement that he believes will lead the GOP back to a majority in Congress.

The book, recently published by Regnery, is "Right Now: A 12-Step Program for Defeating the Obama Agenda." He didn't write it secretly, as his critics charged, but talked about its development with many advisers. It's in all of the bookstores, prominently displayed, delivering the GOP's message, which, after all, is his job.

Now, brace yourself, because Steele's critics are not only going after him for writing this book but also for being paid to do so, the same kind of arrangement many senators and congressmen have signed to promote their political ideas. And like all other authors, they make appearances at book signings and other events to sell more books. There is no law against this, even in the age of Obama, at least not yet, and there is nothing wrong with it, either.

But Steele's critics have a lot of trouble with the fact that he's going to make a few bucks on this book, and they are plotting to offer a resolution at the RNC's upcoming winter meeting that will demand he stop promoting his book and turn over any money he received for it to the RNC.

Steele has shot back, telling his detractors to cease and desist in these obviously politically motivated attacks. "I'm the chairman. Deal with it," he replied, daring them to fire him. "If they want it, take it from me. Until then, shut up, step back and get in the game and help us win."

Unlike past party chairmen, some of whom have been among his critics, Steele is not a member of any law firm, fat-cat lobbying outfit or corporate board of directors.

Former RNC Chairman Frank Fahrenkopf "was associated with three different law firms in Nevada and Washington during his party tenure" in the Reagan presidency. "In addition to his salary as RNC chairman, Clayton Yeutter received a consultant fee and received payments for serving on the boards of directors of three major corporations," according to a 2008 study of past party chairman by the Center for Public Integrity.

The tiny number of RNC members (just two or three names have actually surfaced in public out of 168 members) who are among the complainants are by and large people who did not support Steele's election in the first place and are out to bring him down by hook or by crook.

It is a disgraceful effort on their part, coming at a time when the GOP has been making a remarkable political comeback against all odds and is entering a midterm-election year when party unity is critical to its success.

Steele's critics are obviously people who have too much time on their hands. They need to get a life or at least get out of the way.

Biden Reminds Gun Owners the Government Has Nuclear Weapons
Townhall
Kurt Schlichter gives journalists some questions to ask the president after his comments about needing F-15s and nukes to fight the government
Twitchy
Biden Threatens to Nuke Americans but Manages to Blow Up a Big Democrat Narrative Instead
Redstate
Facebook's New Announcement on Satire Doesn't Bode Well for the Babylon Bee...
PJ Media