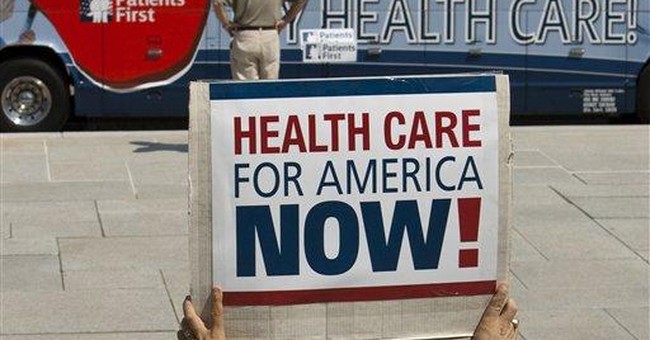 WASHINGTON -- The escalating war to block Barack Obama's hostile takeover of our healthcare system has moved to a wider battlefield of TV ads, Internet videos and town-hall meetings where his opponents may have the advantage.

With Congress on vacation through Labor Day, the grassroots ad wars of August against Obama's government-run medical-care scheme is being fought out on a more level playing field where Republicans have shown they're better at this kind of combat than their Democratic rivals. Think Hillarycare, for example, an incomprehensible, Rube Goldberg budget buster that Democrats never brought up for a vote in the House and Senate.

The protagonist in many of the GOP's ad videos will be Obama himself, as critics use his own words to show what health care would be like if he and liberal Democrats get their way.

House Republican Leader John Boehner's office sent out one of the most stinging Internet ads this week, titled "I'm Not a Doctor, But I Play One on TV."

In it, an actor is seen reciting those words before the video switches to Obama suggesting to a woman at a town-hall healthcare meeting that maybe her 100-year-old mother would have been better off without the expensive pacemaker she had implanted to alleviate her heart trouble.

The video shows Obama during an ABC News broadcast at the White House, saying that families need better information about their medical choices so that they don't have to accept "additional tests or additional drugs that the evidence shows is not necessarily going to improve care."

Then Obama adds, ruefully, "Maybe you're better off not having the surgery but taking the painkiller."

Back to the doctor, and then back to Obama, this time at a prime-time news conference, suggesting that doctors will needlessly take out a kid's tonsils just to make more money.

The video truncated his remark, but here's what Obama said: "... you come in and you've got a bad sore throat, or your child has a bad sore throat or has repeated sore throats, the doctor may look at the reimbursement system and say to himself, you know what, I make a lot more money if I take this kid's tonsils out."

Obama has used this kind of cynical technique in other speeches that attacks the healthcare industry in a political attempt to raise fears that polls show the American people do not share. In this case, planting the idea in people's minds that greedy doctors are more interested in making money than in their patient's well-being. He has repeatedly attacked the insurance industry and the medical profession when polls show that Americans are overwhelmingly satisfied with their insurance coverage and their doctors.

Back to the video and the actor repeating his "I'm not a doctor" mantra to underscore that they should distrust anyone dispensing medical advice who is not a doctor, then back to Obama who is at it again. This time, he is talking

about "a blue pill and a red pill," suggesting the blue generic pill is the better choice because it was "half the price of the red pill." Of course, that is not always true. In some cases, the generic can be less effective.

By using a bit of humor in a deadly serious subject, the video deftly underscores one of Obamacare's biggest flaws: bureaucratic federal rules and regulations that will dictate what medical options you will have under a government-run system. It may not include the pacemaker that seniors need, or it may mandate generic drugs that aren't right for your loved ones. Maybe the rules will suggest that you take a painkiller instead.

Obama has hammered away at this point, most recently at his last news conference when he said he wanted Americans to get the best care, just not the most expensive. What is he suggesting? That his healthcare plan may not cover certain costly lifesaving procedures or treatments? It sounds that way and smacks of rationing or worse.

Republicans will be running a lot of ads like this throughout August to throw the Democrats on the defensive and get more Americans thinking that maybe this $1 trillion-plus spending scheme isn't the way to improve our healthcare system or make it more affordable.

But a strategic part of this grassroots offensive against Obamacare is taking place at town meetings where angry voters are telling Democrats to vote against it.

The American people, God bless 'em, don't like what they've heard about Obama's plan. Forget what Democrats hope to vote for after Labor Day. This plan may be effectively defeated in the wars of August by an angry electorate that wants the government to keep its hands off their healthcare decisions.