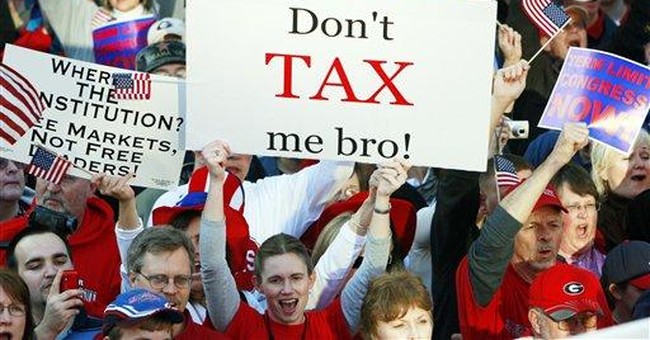 Liberal big-government groups dismissed them as the work of right-wing advocacy organizations in Washington and claimed that the events were so dispersed, most of them in small cities and towns, no one could be sure how many had actually turned out to attend them.

More than 600,000 people in nearly 600 localities -- from Bakersfield, Calif., to Atlanta, Ga. -- turned out to vent their anger over the Democrats' massive-spending levels. And a rally-by-rally account of the people who attended the events suggests that turnout could have been much higher.

The seemingly spontaneous April 15 protests have since grown into a more muscular movement of patriotic Americans concerned that the huge and escalating cost of government under President Obama and his party threatens to plunge the country into paralyzing levels of debt and taxes that will rob them of their economic freedoms.

Now the organizers are setting their sites on mass demonstrations in Washington and elsewhere this summer and fall when Congress will be battling over Obama's biggest budget-busters.

Organizers told me that rallies are planned here and around the nation on July 4 to tie their movement's goals to America's founding principles; on Sept. 12, when Congress is expected to be in the midst of debate over the administration's plans to pass a government-run healthcare system, cap-and-trade energy taxes and other big-spending programs; and on Oct. 2, when supporters expect the spending battles will be at full throttle.

"There is no central-government body behind this. It's a genuine grassroots movement, so I think you will continue to see an array of grassroots protests giving voice to their concerns (about) losing their freedom, specifically their economic freedom," said Tim Phillips, president of Americans for Prosperity and one of the movement's many informal leaders.

There appears to be no unanimity among the disparate groups around the country about the various protest dates. "Some will say July 4, or Sept. 12, while others will have a rolling series of events in their localities," Phillips told me.

Since April 15, the thousands of little-known, first-time protesters who organized and promoted the events appear to have faded back into obscurity. But leaders monitoring these groups said they have been busy organizing themselves through a spurt of new Web sites, local meetings and many have become active in local politics.

"In some areas, we've noticed Tea Party activists are getting involved in local government in school boards, town councils and a lot of national Web sites are popping up to organize for another massive 'Tea Party Day' push," said Adam Bitely, director of new media at Americans for Limited Government.

The Web sites have names like TeaPartyPatriots.org, and Bitely's NetrightNation.com monitors the Web sites and reports on the movement's progress.

A month after the national Tea Party protests stunned the conservative establishment by their size and spontaneity, veteran organizers here are still taking stock of their breadth and depth.

"I was surprised by the number of people willing to go out and demonstrate in public against spending too much without the spark of tax increases. It's a much more sophisticated, philosophical electorate than I had believed existed," said Grover Norquist, the veteran tax-cut crusader who runs Americans for Tax Reform.

"Nobody issues orders to this group, no one institution, no one person. This is the future of parallel organizing, person-to-person organizing -- everything the Internet allows you to do," Norquist told me. "This is a leave-me-alone coalition."

Brendan Steinhauser, coordinator for the free-market advocacy group Freedom Works, told me that he was "amazed by the energy created by all of this, and I think that is what you are going to see in Washington, D.C., on Sept. 12.

"It should be a big event where we take that message about spending and taxes from the states to the Nation's Capital. Congress will be back in session after its August recess, talking about budgets," he said.

Just how much fervor and energy this movement can produce remains to be seen, but it could be significant. More than a half-million people spread out across the nation doesn't have the same political impact as thousands gathered in front of the Capitol demanding spending cuts.

We do know that Obama responds to public pressure when he thinks it endangers his presidency. In the aftermath of the April 15 demonstrations, he asked his Cabinet to collectively identify $100 million in budget savings in a hastily arranged photo-op that was rightly ridiculed as a meaningless gesture.

If this movement ends up being as powerful as I think it can be, Obama and the Democrats will be up against something big.