Cuomo's Ambitions Take a Back Seat to Paterson 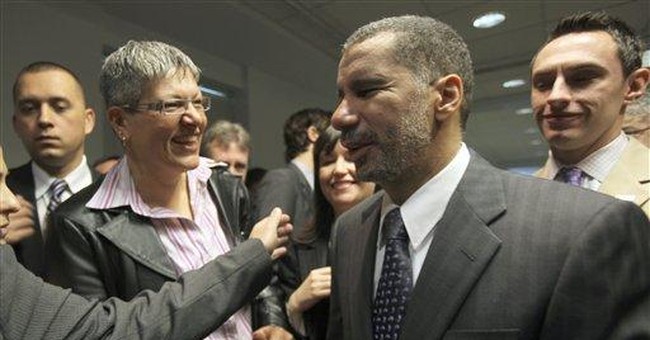 WASHINGTON -- Attorney General Andrew Cuomo, whose aggressive pursuit of wrongdoers on Wall Street has made him New York's most popular Democrat, wants to be its next governor.

But one man stands in his way: David Paterson, the first black, and legally blind, governor in state history and now one of that office's most unpopular Democrats. The former lieutenant governor was thrust into office when Eliot Spitzer resigned in disgrace after getting caught up in a prostitution scandal. Many saw him as an officeholder until the next election, but he says he intends to run for a full four-year term of his own next year.

Yet he is presiding over a nearly dysfunctional state government that is deeply in debt, and a Democratic-run legislature that has been spending money like there's no tomorrow and raising taxes on just about anything that moves. Polls show nearly two-thirds of the state's voters think Paterson does not deserve to be elected, and that in a head-to-head primary fight, Cuomo would trounce him by 61 percent to 18 percent, according to a Quinnipiac University survey.

In a general-election matchup, Cuomo beats Republican Rudy Giuliani, the former New York City mayor, who is also thinking about running -- depending on who his opponent will be.

Cuomo hopes to follow in the footsteps of his legendary father, Mario Cuomo, who ran the state for 11 years. But for now, he does not want to challenge Paterson in what would surely be a deeply divisive party-primary fight that would make him a pariah among the black electorate.

He remembers ruefully what happened when he ran for governor in 2002, challenging black state Comptroller Carl McCall, the establishment's choice, in a bitter primary battle. Eventually, he dropped out of the race, his political career damaged by the resentment of the party's black leadership.

"That was a race he should not have run at that time. I think he would agree with that," Democratic Assemblywoman Vivian Cook of Jamaica, N.Y., told me.

So he is biding his time, hoping Paterson's unpopularity will force him from the race. Still, Cuomo is steadily building alliances for a gubernatorial campaign, fattening his campaign war chest, and taking well-aimed potshots at the fiscal mess in Albany, signaling that he will be ready if duty calls.

Meanwhile, Cuomo says he will run for re-election for AG and expects Paterson will head the ticket in 2010. As for Paterson's unpopularity, he told a recent political forum in Schenectady, "The polls go up, the polls go down. I'm very happy being attorney general."

But Cuomo's driving ambition is hard to hold back. Earlier this month, a senior Cuomo aide hurled what many saw as a clear political broadside against the Paterson administration that sounded like the first salvo in an emerging gubernatorial campaign.

"The attorney general believes the state must do a better job of reducing government spending and increasing efficiencies in order to avoid tax hikes," Cuomo spokesman Richard Bamberger told the New York Post.

"The attorney general also believes our government needs to be more transparent in its budget processes," Bamberger added.

There is a well-worn route to the governorship through the attorney general's office, as Spitzer showed. But Cuomo, perhaps the most feared law-enforcement official on Wall Street, has set a pace that has impressed friends and foes alike: He has brought fraud charges against an investor who put millions of his clients' money into Bernie Madoff's $60 billion Ponzi scheme; demanded that American International Group's (AIG) bailed out executives give back their fat bonuses; indicted top advisers to the former state comptroller in a "pay to play" kickback scheme that milked tens of millions of dollars from the state's $122 million pension fund; and demanded the names of Merrill Lynch executives who reaped huge bonuses while the firm was losing billions and being bailed out by the U.S. Treasury.

He even launched an investigation of then-Gov. Spitzer that uncovered a "disturbing abuse of power" in a political plot to destroy the reputation of then-Senate Majority Leader Joe Bruno.

"People love him because he's done a good job as attorney general. In times like these when Wall Street has failed and people seek some kind of retribution, going after Wall Street is not a bad thing," said New York's veteran Democratic campaign strategist Hank Sheinkopf.

But whether he will follow in the footsteps of his famous father remains to be seen, Sheinkopf told me. "First, there has to be an opportunity and, as of this moment, David Paterson has said he intends to run," he said.

But what if Paterson hangs on and is the party's nominee next year, forestalling Cuomo's gubernatorial ambitions for another four years? That sets up a delicious scenario where Rudy Giuliani would be the favorite to reclaim the governor's mansion for the Republicans and put him back in contention for yet another presidential run.