States Ring in the New Year with Increased Taxes 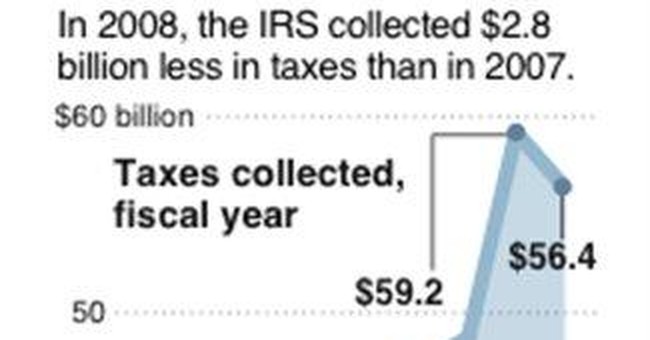 WASHINGTON -- As Barack Obama lobbies for his aid-to-the-states economic stimulus plan, governors are preparing to sharply raise taxes and fees that will hurt the low-to-middle-income families he wants to help.

A review of budget proposals being cooked up by governors across the country shows they intend to raise next year's taxes on clothes, shoes, soda, hospitals, health insurers, gasoline, auto licenses and many other expenses that most Americans consider necessities.

State officials say they are required by law to balance their budgets and that some tax hikes are necessary to do that, but fiscal analysts say that raising taxes in the middle of an economic downturn will only worsen local economies and prolong the recession.

"Middle-income families do not get wage increases during a recession, but neither should the states. Families have to cut back and so should state governments. They should cut spending," said fiscal analyst Chris Edwards who tracks state budgets at the Cato Institute.

"These states should have been retrenching after budget increases of 7 percent over the last two years, but they repeated the same mistakes they made in the late '90s, assuming the good times were going to last forever," Edwards told me.

In its annual report on the states, the National Governors Association reported last month that, "Most states experienced poor fiscal conditions in 2008, with conditions for fiscal 2009 expected to continue to severely decline as the national recession deepens."

But spending critics said that not enough attention was being paid by the national news media to the plight of taxpayers whose incomes were being depleted by rising sales taxes, fees and higher property taxes.

"Most reporters are covering the state budgets and thinking 'Oh, the poor states' and no one is looking at this from the perspective of the taxpayers who are the ones whose wallets are going to be on the line," said political strategist Trent Duffy.

While states are generally holding the line on income taxes, analysts said many are pushing tax and fee increases on the necessities of life:

-- In New York, Democratic Gov. David A. Patterson has proposed a $4 billion-revenue package that includes 137 new or increased taxes and fees that will impose an 18 percent anti-obesity tax on non-diet soft drinks, extend the sales tax to clothing and shoes under $110, and raise taxes on car rentals, gasoline, cable-TV service and a host of professional licensing fees from barbers to home inspectors and manicurists. He also wants to end property tax rebates and raise fees on motor-vehicle registration, auto insurance and state parks and hike tuitions at state universities.

-- In Oregon, Democratic Gov. Ted Kulongoski's $15.8 billion budget is calling for higher taxes on hospitals, health insurers, cigarettes, gasoline, vehicle registrations and corporations. He wants to push the gas tax up by 2 cents to 26 cents a gallon and raise vehicle-registration fees from $27 a year to $81.

The taxes would hit healthcare facilities across the state "at a time when Oregon's hospitals are facing a severe downturn in their net operating revenue," hospital officials said.

-- In California, Republican Gov. Arnold Schwarzenegger, who won the election by promising not to raise taxes, is proposing a 1.5 percent increase on the sales tax that is now set at 7.25 percent. He also wants to raise the motor vehicle registration fee by $12. His critics say both taxes are regressive because they hit low-to-middle income taxpayers the hardest.

-- Gov. Butch Otter of Idaho, a Republican, is asking the legislature to raise vehicle-registration fees, hike the 25-cent-per-gallon gas tax and broaden the sales tax.

-- In Kansas, Democratic Gov. Kathleen Sebelius and state legislative leaders are calling for a major cigarette-tax increase somewhere between 50 cents and 75 cents per pack to help finance healthcare programs.

Other governors who vowed never to raise taxes seem to be changing their tune in the face of declining revenues. Nevada Gov. Jim Gibbons refused to raise taxes this year, calling instead for $1.2 billion in spending cuts. But now he says, "Nothing is off the table this time."

Wisconsin legislators are also considering tax and fee increases and South Dakota is weighing a gas-tax hike at a time when motorists are finally getting a break on gas prices.

The incoming Obama administration plans to send $400 billion to the states to prevent budget cuts in safety-net programs for low-to-middle income Americans. Yet this all seems moot, as citizens will be squeezed even more by their own states and localities.