For America to Survive, Obama Must be Economically Flexible 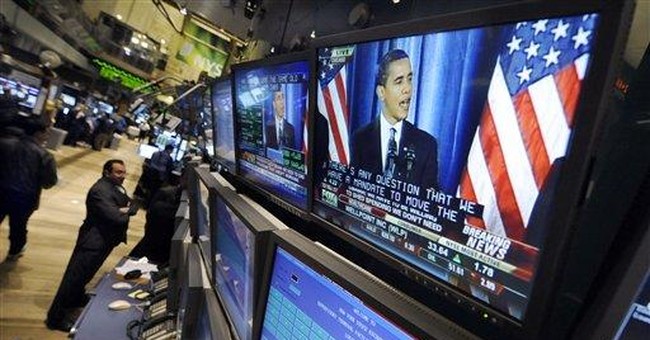 WASHINGTON -- As America fell deeper into the Great Depression after the 1932 presidential election, president-elect Franklin D. Roosevelt wanted nothing to do with Herbert Hoover's economic recovery efforts.

FDR, who would not be sworn in until early 1933, stayed out of the economic debate entirely, deciding he would not act until he became president.

Not so with president-elect Barack Obama, who last week shifted from the hands-off posture of "we have only one president at a time" to "the work starts today, because the truth is, we don't have a minute to waste."

Not only did Obama give the green light to his newly named economic team and Democratic leaders of Congress to begin preparing a stimulus package that he intends to sign the day he takes office, but his top advisers had already been working behind the scenes with U.S. Treasury Secretary Henry Paulson and the Bush administration to fashion the Citigroup bank's huge rescue plan.

Obama's Treasury secretary-designate Timothy Geithner and former Treasury secretary and Citigroup board member Robert Rubin -- with Obama's approval -- had been in constant contact with Paulson as they worked out the biggest bailout plan to date, in an attempt to save Citigroup from going under in a sea of bad debts.

All of this took place with the knowledge and full approval of President Bush, who encouraged Obama's more activist approach to the economic turmoil that now grips the nation. Bush has been briefing Obama on the day-to-day decision-making, and told reporters last week that "anytime we're to make a big decision during the transition, he will be informed, as will his team. It's important for the American people to know that there is close cooperation."

Obama's economic team consists of a curious mix of more center-leaning types like Geithner and former Clinton Treasury secretary Larry Summers, who will head the White House's National Economic Council, and others who fall decidedly on the liberal end of the political spectrum.

Geither and Summers are proteges of Rubin (a co-worker of Paulson's at Goldman Sachs) a thinker very much in favor of free trade, deficit reduction and growth deregulation.

Several important position shifts have been signaled in all of this during the past week -- shifts that suggest Obama may be more flexible in some of his economic policies than anyone thought possible.

First, it appears his advisers have Obama rethinking his campaign plan to slap higher taxes on people in the top two tax brackets who earn more than $250,000 -- which would push the top rate to nearly 40 percent.

With the economy bleeding badly and unemployment threatening to hit 8 percent or more in 2009, this is no time to be raising taxes on anyone -- especially that sector of the economy that's responsible for most of the nation's investments and venture capital risk-taking.

That means the Bush tax cuts will remain in place at least in the first two years of Obama's presidency. Those tax cuts were not due to expire until the end of 2010 and Obama had said he would keep all of the lower-tier bracket cuts in place anyway. Now it appears the top brackets are safely in place, too, at least until 2011.

Second, it is hard to see Obama pushing his two other tax hikes that would slap beleaguered investors with 20 percent rates on capital gains and stock dividends. It doesn't take a genius to see that financial markets need more investment, not less. We need to be encouraging investments in equities that would boost stock values and restore worker retirement wealth.

Obama may not be ready to cut taxes on capital gains and dividends, which he should, but he's not about to whack the nation's stockholders, who have already seen their investments plunge by nearly 50 percent.

Third, the monster deficits he faces, worsened by the gigantic stimulus package he intends to sign, will force him to cut more deeply into the rest of the federal budget. Sky-high deficits that will easily be in the $1 trillion-plus range next year would curtail his long-term domestic spending plans on health care and education, so he will be looking for bigger budget cuts wherever he can find them.

The fear is that he will make disproportionate cuts in defense to obtain those offset savings, but that would make America more vulnerable in the war against terrorism and once again raise his party's political weakness on national security issues.

Meantime, the economy is getting the equivalent of a big tax cut in the form of plummeting gas prices that are now below $2 a gallon for regular. That is cutting consumer and business costs significantly. It couldn't come at a better time as Obama prepares to take responsibility for the nation's remaining economic ills.