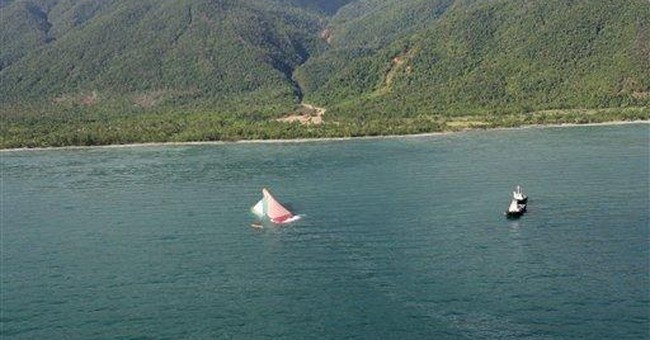 WASHINGTON -- America's paralysis over the oil crisis is a textbook example of the ideological divide that has polarized our politics and hurt our economy in the process.

Reducing the price of $135-a-barrel oil and $4-a-gallon gasoline is not that hard to do. This is not brain surgery or nuclear physics. We have it within our power to bring down the price of both by tapping into our vast resources and technology -- now.

That's what Sen. John McCain is proposing to do. Last week, he called for ending the ban against drilling on the outer continental shelf to extract the billions of barrels of oil that lie beneath the ocean and licensing new refineries to turn it into gasoline. Both would not only boost U.S. oil and gas supplies, they would bring down the price of both -- and faster than his critics say.

Just the declaration of this policy by the government would send a clear signal to oil traders and speculators accused of manipulating prices on the open market. They are betting that oil production and gas inventories will remain largely at present levels. That means that as demand rises, traders have been able to bid up prices -- as they would with any finite commodity whose prices rise when demand threatens to exceed supplies.

McCain's plan would break the back of that practice by doing what the traders think we won't: increase oil and gasoline inventories that would bring down the price of gas at the pump. He has also called for licensing 45 new nuclear-power plants, which would further reduce demand for coal and oil and lower fuel prices even more.

Sen. Barack Obama, on the other hand, wants none of this. He is flatly opposed to increased oil exploration and drilling. His energy agenda is all about slapping windfall-profits taxes on U.S. oil companies, and spending that money on new clean, un-invented technologies.

He has further suggested that he would raise taxes on coal and natural gas, too -- money that he would spend on other speculative government energy-research schemes that would push the solution to our energy problems decades into the future.

Equally worrisome, Obama sent an unambiguous signal last week that he was not that bothered by the run-up in gas prices. He wants prices to rise but just not as fast, he said.

In an interview with CNBC, John Harwood asked him, "So could these high prices help us?"

Obama's reply: "I think that I would have preferred a gradual adjustment. The fact that this is such a shock to American pocketbooks is not a good thing. But if we take some steps right now to help people make the adjustment, first of all by putting more money into their pockets, but also by encouraging the market to adapt to these new circumstances more quickly, particularly U.S. automakers, then I think ultimately, we can come out of this stronger and have a more efficient energy policy than we do right now."

The freshman senator was parroting the environmentalist line that oil and gas prices need to rise to much higher levels to make new heavily subsidized technologies financially cost-effective.

Even Obama's news-media friends find his benign approach to higher gas prices beyond the pale. "The mantra from the Democratic Party -- from the presumptive presidential nominee, Sen. Barack Obama, on down -- has been a variation on 'We cannot drill our way out of this energy crisis,'" the Washington Post editorialized this week.

While the industrialized nations of the world are drilling deep-water oil wells to meet their own energy needs, "it's hard to explain why the United States should rule out careful, environmentally sound drilling off its own coasts," the Post said. Exactly.

Democrats have criticized McCain for flip-flopping on his long-held opposition to drilling offshore (though he still opposes drilling in the Arctic National Wildlife Refuge). But his change of heart proved that he was not rigidly wedded to some fixed ideological position in the face of an untenable situation.

So, as oil and gas prices continued to spiral upward this week, McCain was, as Abraham Lincoln said, thinking anew so we can act anew, bringing market forces to bear on a supply-and-demand solution. Obama, however, remained stuck in a bureaucratic, liberal mind-set that sees higher taxes, increased federal regulations and costly business mandates as the only answer to all our energy ills.

It is more than likely that gas prices are going to rise higher between now and Election Day and play a larger role in the presidential-campaign debate.

McCain clearly occupies the higher ground in this debate, and Obama faces increasing public opposition to his anti-drilling position. "Nearly all voters are worried about rising gas and energy prices, with 79 percent very concerned and 16 percent somewhat concerned," according to a Rasmussen poll.

A solid 64 percent of Americans believe that gas prices will go down if offshore oil drilling is allowed, Rasmussen said. This is a powerful issue for McCain and maybe the deciding issue of the campaign if forecasts of $5- to $6-a-gallon gas prices become a reality in November.