Economy Needs Any 'Export' In A Storm 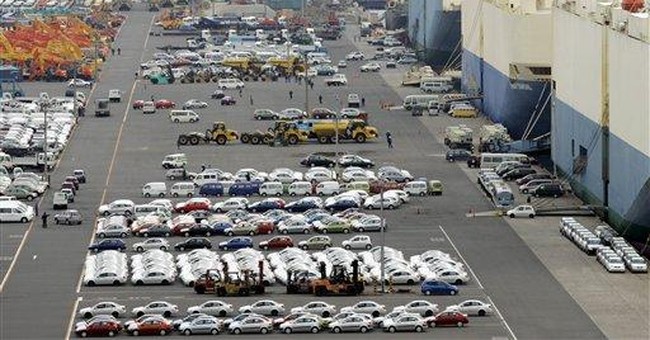 WASHINGTON -- The presidential primary exit polls in Wisconsin last week reconfirmed that the U.S. economy was the number one issue on the voters' minds, as it is across the nation. But the most troubling part of the polls' findings was what voters blamed for the economic downturn: free trade agreements that have opened up foreign markets across the globe to American goods and services.

Like a lot of other manufacturing states, Wisconsin has lost factory jobs as companies have downsized in a changing economy and moved some of their operations overseas. Many Wisconsin voters blamed trade for the economy's decline.

In fact, trade is one of the strengths in Wisconsin's economy. The Badger State's exports rose by 15 percent in 2006, following a 17.4-percent rise in 2005. Figures for last year are not in yet, but they are expected to be robust.

In dollar terms, Wisconsin's exports totaled $17.2 billion in 2006, up by 64 percent since 2001. Its largest export industries were in construction, farming, and industrial machinery, plus engines and power transmission equipment.

Wisconsinites manufacture forklifts, compressors, hydraulic jacks, tractors and bulldozers, and if you follow America's global export trade business, you know that U.S. agricultural and construction equipment has been selling like hotcakes overseas.

Who are they selling this stuff to? Canada was the largest importer of Wisconsin's products ($5.4 billion), followed by Mexico ($1.9 billion), China ($870 million), Japan ($739 million), and the United Kingdom ($686 million). But they also sell to many other countries, including Australia, Belgium, Saudi Arabia, Venezuela and Bangladesh. Oshkosh Truck signed a $4.9 million contract with the Egyptian Ministry of Defense last year. Harley-Davidson is roaring into China's motorcycle market, opening its first dealership in that country. These export industries are responsible for a lot of jobs and the people in Wisconsin who have them do not blame trade -- on which so many of their jobs depend -- for the rough patch the economy is going through.

A lot of things are responsible for the current economic downturn, but it is clear that the decline in the housing and credit markets and $100-a-barrel oil are the chief causes of what ails us as their repercussions ripple across the U.S. economy.

The voters of Wisconsin know what they see, of course, and the trend in lost factory jobs has not escaped them, even though U.S. manufacturing makes and sells more than ever before as a result of new technology and rising productivity.

Still, a majority of Americans believe the myth of deindustrialization and the oft-repeated claim that "America doesn't make much anymore." A lot of politicians, including a few presidential candidates who should know better, are spreading this disinformation.

Both Hillary Clinton and Barack Obama have been bashing trade deals in their campaigns, and they were working that issue in Wisconsin in their efforts to attract votes. People who believe that trade killed jobs in the state gave them their support.

But turning away from trade agreements, now and in the future, will not strengthen our economy, it only weaken it. There is nothing wrong with the economy in Wisconsin or the rest of the country that cannot be helped by opening overseas markets to our products and services. U.S. export sales have been running at about $1.3 trillion a year and that figure is going to climb as a result of an expanding world economy and a weaker dollar that is making our products more competitive.

I do not think the trend in manufacturing downsizing is going to change in the years to come because technology will allows us to make more things faster, cheaper and with fewer workers. But if Clinton and Obama want to expand the

U.S. manufacturing base and help American workers at the same time, expanding overseas trading markets for made-in-the-USA stuff should be at the top of their list.

Number two on that list should be cutting the corporate income tax from 35 percent to 20 percent or lower. We have the second highest tax rate on corporations in the industrialized world, after Japan. A lower rate would make us more competitive with the rest of the world, which is where our economic future lies.

"The claim that automation and international trade will create a large class of permanently unemployed American workers remains as fuzzy as ever," writes economist Stephen Rose, who is at work on a book titled "Mythonomics," in the Washington Post. One of those myths is that because of trade with China and India, "the United States has become a nation of low-paid service workers destined for a high rate of unemployment."

But Rose notes that Commerce Department data shows "that even at the state level, including in Midwestern 'Rust Belt' states, employment is up at least 14 percent since 1993, the year the North American Free Trade Agreement was passed."

We need to open up more markets to more trade, not less, as the Malthusians would have us do. For openers, let's drop the economic sanctions with Cuba and sell them whatever they want.