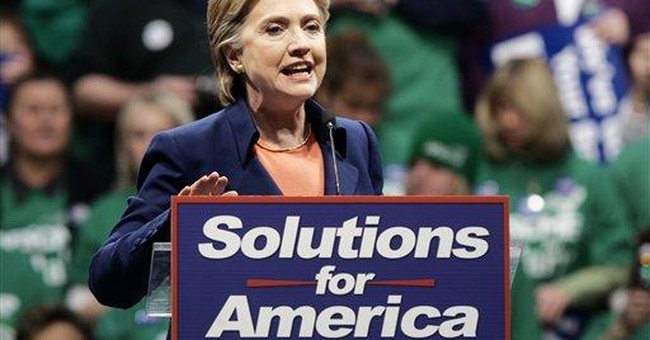 WASHINGTON -- Hillary Clinton has a problem with Barack Obama's speaking skills, which outshine her own plodding, wonkish, technocratic speeches.

At a time when our country is confronted by big issues and daunting challenges, the former first lady has been attacking the freshman senator for his superior oratory. Such is the trivialization of today's Democratic presidential campaign.

Intimidated by the apparent contrast between Obama's often-soaring campaign rhetoric and her flat, nuts-and-bolts speeches that tell us she is "ready to lead on day one," she has been ridiculing and belittling Obama's polemics -- a defensive campaign tactic that Democratic Party advisers say isn't smart and isn't working.

"Speeches don't put food on the table. Speeches don't fill up your tank, or fill your prescription, or do anything about that stack of bills," she said last week at a General Motors plant in Warren, Ohio. "My opponent gives speeches. I offer solutions."

It has become a staple theme in her stump speech that she repeats just about everywhere she goes in one form or another. "There's a difference between speeches and solutions, between talk and action," she said this week in Wisconsin.

Is this what the Democratic primary is about? Speech envy?

But party strategists, including some who are her supporters, tell me that her attack strategy is ineffective at best and self-defeating at worst because she seems to be admitting that her rival has better communication skills -- one of the chief requisites of an effective president.

"I don't think it's a smart attack, unless she can make the 'all talk, no accomplishments' charge stick. Clearly when good oratory is linked to action, it enhances the effectiveness of the action," said a key Democratic Party adviser who served in the Clinton White House.

"It's obviously not working. She seems to be belittling herself in the process," said another Democratic election strategist who did not want to be identified.

Government scholars seem to agree, saying that good speaking skills are important attributes in a president seeking to lift up a beleaguered nation, move it in another direction or build support for a reform agenda.

"The two most successful recent presidents are Ronald Reagan and Bill Clinton, who gave great speeches. They were really good at it, and that's one of the reasons they were successful," said Gregg Easterbrook, a governance-studies scholar at the Brookings Institution.

"One of the main things we remember about Abraham Lincoln is his oratory. We don't remember the details of a deal he cut with the House Ways and Means Committee, but we remember his speeches," Easterbrook told me.

It does, indeed, and that's a major reason why Obama was leading in the delegate count and drawing huge crowds that, in most cases, dwarf the voter turnout at Clinton's events.

Clinton's obsession with Obama's eloquence took a nastier turn this week when her campaign aides attacked him for using a few lines from Massachusetts Gov. Deval Patrick (an Obama adviser) without crediting him. "Don't tell me words don't matter," Obama said, reciting famous phrases such as Martin Luther King Jr.'s "I have a dream," Thomas Jefferson's "We hold these truths to be self-evident" and President Franklin D. Roosevelt's "We have nothing to fear except fear itself."

Because the borrowed passages were some of the most recognizable and inspiring words in American political history, Clinton's plagiarism attack fell flat and made her look silly in the attempt. He dismissed the criticism as "not a big deal," confidently adding, "I thought they were good lines."

But something bigger was happening here. Her small-minded attacks on Obama's strengths as a speaker have only served to call attention to her own weaknesses in communicating her ideas. The result is that her repeated put-downs of his oratory are drawing increasing criticism from the news media.

On Super Tuesday, The New York Times noted, "She often sounds more like a senator than a presidential candidate -- delivering wonky recitations of her policy positions instead of a raise-the-roof stem-winder."

"She is campaigning in prose and has left the poetry to Barack Obama," writes Washington Post columnist E.J. Dionne Jr.

We judge our presidential candidates by their words and the way they convey them. Ideas and the details behind them sometimes become lost in the crossfire of a primary campaign, but the words can breathe new life into those ideas and rally voters behind a cause greater than themselves.

There is something rather small about a presidential candidate who feels she must demean her rival's powers of speech because she does not possess those skills herself.