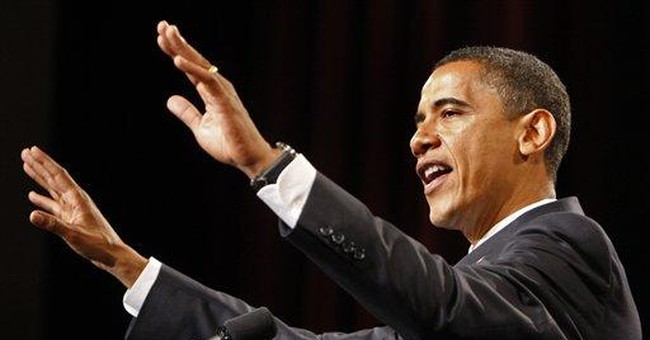 So isn't it interesting that we keep hearing about Sarah Palin's peccadilloes while the major media continues to ignore the George Obama scandal? Here is a guy living in Third World poverty and his half-brother is the leading candidate to become the next president of the United States. Are the networks and major newspapers so exhilarated at the prospect of an African American president that they have become cheerleaders for the Obama campaign? Fortunately the McCain campaign is making the media an issue, and I hope the American people are smart enough to see through the news charade.

Here are the facts about George Obama. He’s in his twenties. He lives in a slum in a hut. He wants to become a mechanic but doesn’t have the money. He reports that he gets by on a dollar a month. He met George Obama in 2006 for a few minutes and said it was like talking to a “total stranger.” He said when people notice he has the same name as Barack Obama, he denies they are related because he is “ashamed.” The Democratic presidential candidate, who made $4 million last year, hasn’t lifted a finger to help his half-brother.

My modest campaign to assist George Obama has been coming nicely. Sean Hannity mentioned it on his show on the Fox News Channel, and I appeared on a handful of radio shows to talk about the idea. Interestingly the George Obama Compassion Fund was reported on by Kenya's leading newspaper "The Nation." So far I have received more than $1,000 in small contributions. With my kickoff contribution of $1,000, that's upwards of $2,000 for George Obama.

This is not a huge sum, but I specifically asked people to send gifts of $5, $10 and $25. The reason is that even a relatively modest sum by American standards is a considerable sum by Kenyan standards. George Obama has said that he is living on a dollar a month. This seems an impossible sum to survive on, so I checked the poverty line in Kenya. According to United Nations estimates, it’s around $100 a year. By this measure, our little fund has provided for George for 20 years. Alternatively, George can move out of his 6 foot-by-10-foot hut and into a more comfortable dwelling. He can also get the training he needs to become a mechanic.

The reporter for "The Nation" thought he had me cornered when he asked, "Are you doing this to embarrass Barack Obama?" To which I answered, "Absolutely. He deserves to be embarrassed." The reporter went on to ask me: since when have you developed this great interest in African poverty? I responded that I had only very little interest in African poverty. I happen to come from a very poor country, India, so my philanthropic work is directed there. I only took up the George Obama cause when I heard what a jerk and a hypocrite Barack Obama is being about his sibling. One Obamoron emailed me to say, "Why don't you use your money to help your own impoverished relatives in India?" The answer is that my relatives don't live in huts!

Here are some donor comments which I'll be forwarding to George along with the funds. "This is for the poor brother long forgotten." “A brother is a terrible thing to waste.” "I wish I had a brother, or even a step-brother. George is not my relative and not my race or religion but I still want to contribute to his welfare." "When Obama said that not taking care of the least of our brothers is our greatest moral failure, who knew that he was talking literally about the least of his brothers?" "I never thought I'd be writing a check to anyone named Obama, but I do want to be a true Christian and help this man in his shameful situation." "I'd send more, but I make $9.10 per hour." "I'm unemployed, but I can spare $5 for the Obama Compassion Fund."

I hear a lot from atheists, but interestingly no self-identified atheist contributed a penny. This seems in keeping with sociologist Arthur Brooks’ data showing that secular people are much less generous, both with money and time, than religious people. As Brooks might have predicted, most of my donations came from self-identified Christians, some of them in difficult circumstances themselves. Thanks to this generosity, Barack Obama's half-brother can look forward to the prospect of a better life. George Obama, start packing!