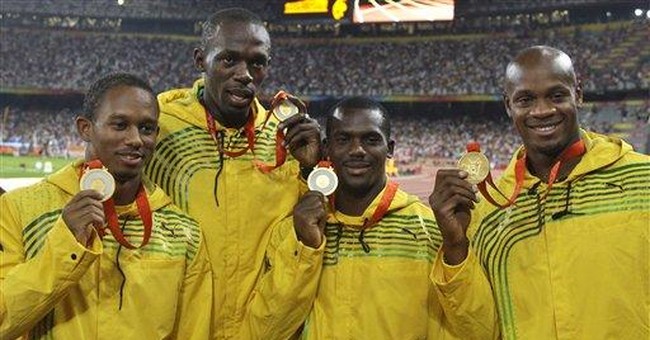 I've been watching with patriotic interest the Olympic track and field events. And I notice something about the results that is both remarkable and fascinating. Even so, this something is never commented on by NBC or any of the analysts.

Consider the sprints. The winners seem to be overwhelmingly of African, specifically West African, origin. The man and woman who blew away the field in the 100 meter dash were both from the tiny country of Jamaica . Indeed the contestants in general seem to originally come from the same part of the world. Virtually no one from a different race and region even qualifies. Sure there are Canadian and French and American sprinters, but they too tend to be blacks of West African heritage. These races come down to our West Africans against everyone else's West Africans.

Now consider the long distance races. The winners once again are overwhelmingly black, this time from East Africa . The 10,000 meter race, for instance, came down two guys from Kenya, two guys from Eritrea, and two guys from Ethiopia. Basically it was a contest of six guys from the same neighborhood! If there were a couple of whites and Asians in these races, they seem to have been running strictly to get photos for the family scrapbook.

These results are not a coincidence. They hold true of every Olympics in living memory. In the early 1990s Amby Burfoot, executive editor of Runner's World, published a lead article called "White Men Can't Run." Burfoot documented that blacks have not only dominated Olympic and world championship races for five decades, but also that black hegemony has increased over time. Along the same lines, the Sociology of Sport Journal reports that since the 1930s, "there has been no American white woman who was world class in the 100, 200 or 400 meter dashes. All the outstanding sprinters have been black."

Yet if black domination is a fact, the mysterious question is why. This is a question examined in John Entine’s fascinating book Taboo. Entine, an Emmy winning journalist formerly with NBC News, has done his homework. He does not completely reject economic and cultural explanations of athletic prowess. He just shows their inadequacy. For instance, examining the notion that poverty is responsible for success in sport, Entine notes that most poor countries do terribly in sports. How many runners from poverty-stricken Bangla Desh, for instance, have won Olympic medals in Beijing? The "spur" of poverty is more than trounced by the benefits of superior nutrition, superior facilities and superior coaching in affluent countries.

So what about culture? Yes, culture can help to account for why Americans do well at baseball and why the Chinese usually triumph in ping pong. Americans play baseball more than most others, and no one takes ping pong more seriously than the Chinese. But Entine notes that running is universal. In every country, young people run races. "Given the universality of running," Amby Burfoot writes in Runner's World, "it is reasonable to expect that the best runnes should come from a wide range of countries and racial groups." So why are there such enduring and overwhelming racial differences in the outcome?

Entine is not afraid to say that "genetically linked, highly heritable characteristics, such as skeletal structure, muscle fiber types, reflex capabilities, metabolic efficiency, and lung capacity are not evenly distributed among populations." These traits help to explain why groups succeed--and sometimes fail--in certain sports. For instance, the same body type that works so well in the boxing ring and on the track doesn't do so well in the water. How many black swimmers have there been on the U.S. Olympic team? Even countries on the African coast have a terrible record when it comes to swimming medals.

Entine's book is titled "Taboo" because he knows how controversial his thesis is, how fiercely it is hated and resisted. I suspect this is not because of powerful academic evidence that Entine is wrong. If there is such evidence, I would like to see it, but so far I've had a hard time finding it. Rather, the resistance is due to the liberal fear that if we praise black athletic superiority and attribute it to genes, this opens the door for racists to speculate about black intellectual inferiority and to attribute it too to genes.

Yet this is a non-sequitur. Groups can be unequal physically and still be equal intellectually. Men and women are clearly unequal in upper-body strength, for instance, and yet the average IQ for males and females is the same, although the bell curve distribution of that IQ is not.

My general point is that many liberals are looking in the wrong place to find a justification for their support for political equality. As Jefferson noted a long time ago, inequality of endowment, whether it exists or not, is no warrant for inequality of rights. Equality is not a factual proposition, derived from biology. It is a moral proposition, derived from Christianity.