The Lesson of Georgia: Bring Ukraine Into NATO 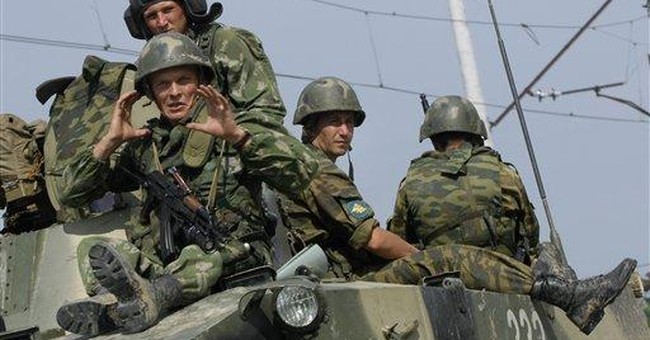 As we watched Russian tanks and planes attack yet another small neighbor, the world had to be reminded of Hungary, Czechoslovakia, and Afghanistan, three other countries that had to watch their freedom crushed beneath tank treads. The blatant, outrageous, and long planned invasion of Georgia should make it clear to the United States and Europe that there is an urgent need to pre-empt further Russian expansionism by spreading the NATO umbrella more widely.

In Eastern Europe, Ukraine is the name of the game. With close to fifty million people, is, by far, more populous and important than any other former Soviet republic or satellite. Russia, with a population of 142 million and dropping, needs to take over Ukraine to reassert itself as a global power. Moscow is terrified that Ukraine will become part of the west. That’s why Russian operatives poisoned democracy advocate Viktor Yushchenko, now the president of Ukraine, permanently scarring his face and almost killing him and why Moscow refuses to extradite the agent responsible for the attack. And it is why the Kremlin tried to engineer the election of a pro-Russian puppet by cutting off gas supplies to Ukraine and then tripled the price it charged. The Ukrainians have voted again and again for democracy and ties to the west. Putin has tried repeatedly to force the nation back into the Russian orbit.

The clear implication of the invasion of Georgia is that Russia cannot be trusted to live in peace with its neighbors. The impetus to imperial conquest predated and has outlasted communism. As Henry Kissinger argues, Russia must either be expanding or contracting. With so many divergent and often hostile nationalities inside and around Russia, the momentum of conquest is the only way to avoid an inertia which leads to decomposition.

Ukraine wants to enter NATO but our European allies, led by Germany, are so dependent on Russian gas that they are reluctant to antagonize the bear. Until now, the case of expanding NATO’s protection to Ukraine has been hypothetical, based on fear of Russian intentions. But by breaking the civilized rules of national conduct, Russia has demonstrated the folly of leaving smaller democracies exposed on its border.

Some – initially including Barack Obama – treated the Russian invasion as a border war for which both sides were responsible. The Democratic candidate called for mutual restraint and, only after two days had elapsed, did he label the Russian actions as “aggression”. Others have sought to blame Georgian president Mikheil Saakashvili for the war because he sent troops into South Ossetia, long a part of Georgia which the Russians have egged on to seek its independence. The breakaway province is an example of Moscow’s oft-used strategy of encouraging emigration to other countries so as to use the new demographics to justify a takeover.

Of course NATO cannot extend its protection to every nation in Europe. It is, in the final analysis, a military alliance and it must be certain that it can back its guarantees with adequate might. The location of Georgia makes this difficult to assure. But Ukraine, located right next to NATO members Poland, Hungary, Slovakia, and Romania, can and must be defended by NATO.

Russia is rapidly losing its population. It has the lowest birth rate in Europe and loses half a million people every year. Its GDP is only $1.7 trillion, a tenth of the Euro Zone’s. It is only through energy reserves that Russia is able to project its influence. And Russia must realize that the West’s likely movement away from oil and toward alternative fuels may make the energy card obsolete in the future. It is only through blunt, blatant military force that Russia can expand and trouble its neighbors. And if the U.S. and NATO stand up to it, Russia will back down. And Ukraine is where we must make a stand.