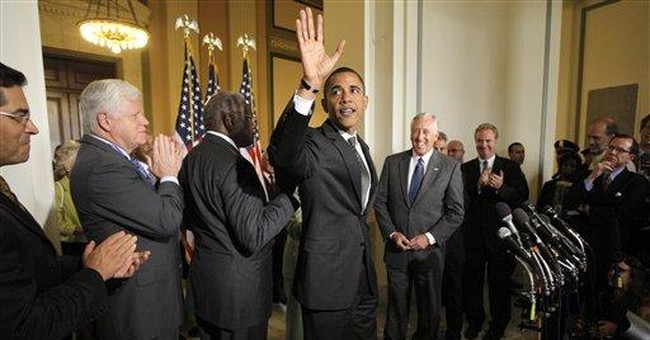 If soccer moms determined the outcome of the 1996 presidential race and security moms tipped the balance in 2004, it is beginning to look as if older moms are the key to the 2008 contest. Obama has a problem among women over 40 and a big problem among women over 50. These groups, normally the staunchest of Democratic supporters, are showing a propensity to back John McCain and a disinclination to support Obama.

The problem is that older women don't like Obama as much as younger women do. While 70 percent of women under 40 have a favorable opinion of the Democratic candidate, only 58 percent of women in their 40s feel the same way, and only 52 percent of those over 50 see him favorably.

For a Democrat to be losing among women over 40 is without precedent in the past 20 years.

In fact, the gap between male and female voting preference in this election is far lower than it normally is. Among people under 40, men back Obama by eight points and women support him by 13. Among those in their 40s, men back McCain by 11 points and women support him by four. And for those over 50, men vote for the Republican by a nine-point margin while women prefer him by three points.

Usually, the gender gap runs at least 10 points in each age group and, more usually, averages a 15-point differential. The lower gap in this race does not indicate any special popularity for McCain or negatives on Obama among men. Men are voting the way they usually do. It's women who are making the big difference and keeping this race tied.

Part of the problem may stem from Obama's defeat of Hillary Clinton during the primaries. Hillary drew her strongest support from older women who still remember the sexism of their youth and their struggles to pierce the glass ceiling. For younger women, sexism has much less personal relevance, and they were less drawn to her candidacy.

But a bigger problem may be a cultural alienation older white women feel toward Obama. The Rev. Jeremiah Wright may linger as a worry in their increasingly gray heads as they contemplate an Obama presidency. This fear of the unknown and the gap they seem to feel with Obama is so strong that it is overcoming their normal proclivity to back Democrats.

Of course, McCain is a uniquely attractive candidate to the Democratic and independent base. Long regarded as a maverick Republican, he attracts these swing voters and is ideally positioned to exploit the estrangement between older women and Barack Obama.

Would choosing Hillary as a running mate assuage the concerns of older white women? It might.

They could get enthusiastic, one would think, about seeing a woman sitting a few feet away from the president in the Oval Office (again!).

But Hillary would bring with her a different set of problems. Her candidacy would invite scrutiny of Bill's financial dealings, most recently exposed in The Wall Street Journal's coverage of the incredible corruption of his buddy, the president of Kazakhstan.

The problem is Obama. And it can only be solved by Obama, not by his running mate. For his part, McCain should take dead aim at this demographic, perhaps by selecting a female running mate who would appeal to them.

The current favorite, Mitt Romney, does him no earthly good with these folks, and his Mormonism is likely to be a big turnoff. But McCain could choose Condi Rice or any number of other Republican women (like Kay Bailey Hutchison, the Texas senator) and attract these dissident women.