When The Enemy of The States is The State 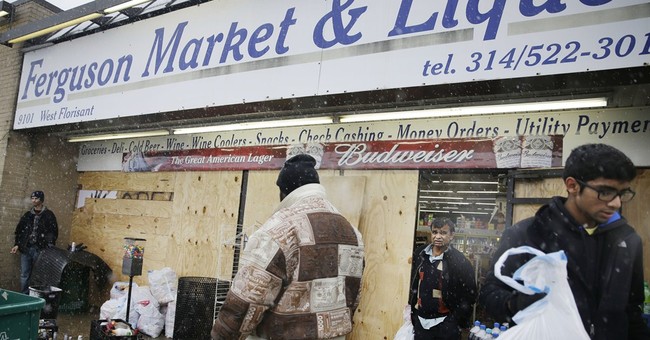 When St. Louis County Prosecutor Robert P. McCulloch explained that some exonerating testimony in the shooting death of Michael Brown in Ferguson, Missouri, came from several African-American eyewitnesses who described Brown as having charged police officer Darren Wilson before he fired the fatal shots, it was a powerful moment.

Such testimony was consistent with physical evidence establishing that Wilson had not fired at Brown's back as repeatedly and poisonously alleged. Indeed, it would seem that the aggressor in this fatal encounter was not Wilson, but rather Brown. According to evidence the grand jury sifted and assessed, it seems that Wilson fired not in cold blood, as so often declared, but in self-defense.

It was this right to self-defense -- "even" for a policeman -- that the grand jury decision left sacrosanct when it determined there was simply not sufficient evidence to indict Wilson for any crime.

Shocking as it may seem, self-defense is not a bedrock right in some courts -- specifically, U.S. military courts, where U.S. soldiers have seen their right to self-defense on the battlefield negated by murder convictions.

The St Louis County prosecutor has now uploaded the grand jury proceedings (all 24 volumes), assorted evidence and witness interviews so all can see how the system worked, and how the grand jury came to its conclusion. This sets an unprecedented standard for transparency in the face of ongoing demagogic efforts to obscure or ignore these same facts. With incendiary talk of anger "rooted in reality," as the president put it, the need for protests, the specter of federal charges and "change," Barack Obama and an army of "racial arsonists" agitate not for justice, not for peace, but for power.

Listening to McCulloch's discussion of how it was that an unarmed, but powerfully built 18-year-old (who had a large dose of THC, the judgment-impairing chemical in marijuana, coursing through his blood) posed a threat to an armed policeman, I couldn't help but think about another case. When former Army Ranger Lt. Michael Behenna shot and killed an unarmed Iraqi terrorist named Ali Mansur in 2008, Behenna, too, claimed to have acted in self-defense when the Iraqi rushed him. Physical evidence supported Behenna's version of events, but he was convicted and originally sentenced to 25 years for murder. When the highest military appeals court affirmed his conviction, it determined that in the circumstances, Behenna had "lost the right to act in self-defense and did not regain it." Sickening.

Think of it. The military appeals court ruling tells us that justice would really have been better served had Behenna been killed in the altercation. I can't help thinking the agitators in the Brown case, from Obama on down, feel exactly the same way about Darren Wilson. To them, self-sacrifice (someone else's) is preferable to self-defense.

Earlier this year, an act of clemency released Behenna from the military prison at Ft. Leavenworth but not before he had served five years behind bars -- for what? Surviving? The legal travesty of the Behenna case is unlikely to have occurred in civilian court, which is one excellent reason why such cases should be removed from military jurisdiction.

There are others. More U.S. soldiers remain behind bars whose main crime seems to be that they, too, remained alive after a do-or-die point of crisis. There is Sgt. Derrick Miller, whose fatal struggle with an Afghan inside the defensive perimeter over Miller's own gun, earned Miller a premeditated murder conviction -- and a sentence of life in prison without possibility of parole for 10 years. Miller, by the way, is an African-American who fails to rate the president's "community of color" concerns, which tells me they are so much smoke to fire up the mob.

There is 1st Lt. Clint Lorance, currently serving a 20-year sentence on two murder convictions, having ordered his men to shoot at three Afghans approaching their checkpoint in Taliban territory. There is also Master Sgt. John Hatley, convicted of the murders of four detainees in Iraq in harrowing conditions. Not only were the bodies never recovered, the deceased were never reported missing. Hatley, however, is serving 40 years in Leavenworth. There is Pfc. Corey Clagett (18 years for following orders to kill from scot-free commanders), whose inhumane abuse at the hands of military wardens is an egregious travesty. There is Marine Sgt. Lawrence Hutchins, whose repeated prosecutions amount to Kafkaesque mental torture.

Surely, these veterans merit the same clemency that has released literally thousands of enemy fighters with American blood on their hands, from Guantanamo to Iraq to Afghanistan. Tragically, Uncle Sam doesn't agree.

And this is where a disturbing pattern takes shape. The Obama administration at these fateful junctures is consistently and predictably callous or hostile to those who have protected it from our worst enemies abroad or maintained the peace at home. Did you hear even a word from Washington about the two sheriff's deputies gunned down in California last month by a twice-deported illegal alien? No, you heard amnesty instead.

By now, it's hard not to notice that these are the Americans in various uniforms who support the edifice of law and order, even world order, that the Obama-ites are committed to dismantling. This would seem to explain the many cases where Obama administration sympathies, or even benefits of the doubt, unduly extend to the other side, whatever form it takes, from terrorists to mobs.

As usual, this leaves the rest of us in serious trouble.