We Live in a Global World -- Take Cover 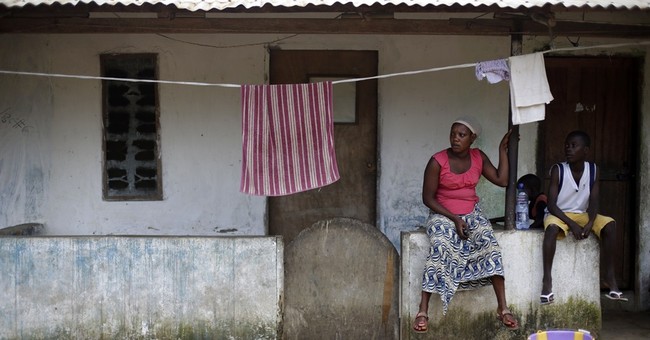 Common sense and love of country dictate that air travel to the United States from the West African Ebola hot-zone nations of Liberia, Guinea and Sierra Leone be suspended until the highly contagious, highly lethal Ebola outbreak is over. That's obvious. Thousands of travel visas issued by the U.S. to nationals in these same countries should be canceled. That's obvious, too.

But President Obama isn't taking such obvious measures to safeguard the American people. On the contrary, the administration is doing nothing to prevent Ebola from entering this country, even after the first case erupted on American soil in a Liberian tourist named Thomas Eric Duncan. Last month, Duncan, knowingly exposed to Ebola himself, traveled to Dallas from Monrovia, Liberia, with layovers in Brussels and Washington, D.C. Now, he is in an isolation ward in a Dallas hospital as health officials scramble to monitor 100 people Duncan came into contact with for signs of the killer virus.

The White House response? The Daily Caller's headline says it all: "White House: We Won't Stop People From the Ebola-Stricken Countries from Coming to the U.S."

What explains this presidential cop-out? So far, the left side of the media seems to be taking heart from the unlikelihood that any -- or, rather, very many -- Americans will become infected with Ebola. They dutifully repeat the official mantra of multinational organizations such as the United Nations, the African Union and the World Health Organization that isolating Ebola-ravaged nations would only make the epidemic worse.

I understand that suspending commercial flights to the region makes it harder for U.N. officials to jet about, and yes, I'm sure it does take a chunk out of African tourism, but such concerns seem a tad secondary at this moment of crisis. Also, as National Review's Jim Gerachty has pointed out, the U.S. and others weren't so coy when it came to enforcing a de facto travel ban to Israel during the summer's Gaza War. Meanwhile, isn't it possible to halt commercial travel to these stricken countries without also prohibiting all humanitarian aid?

That sounds like a more sensible approach -- worth trying, at least, to prevent the disease from spreading to unaffected nations. But I don't think protecting unaffected nations is the guiding goal of the globalist organizations opposing measures to isolate the ravaged areas -- and that includes the United States Center for Disease Control (CDC). As CDC director Dr. Tom Frieden stated on Twitter: "the impulse to isolate countries may make #Ebola epidemic worse. Must use tried & true public health means to stop it."

That sounds as if he's talking about after Ebola arrives here unimpeded. Which makes me wonder: Is this the method to this globalist madness? The CDC director stated further: "The big picture is that the U.S. #Ebola case is a reflection of the epidemic in W. Africa. We'll stop it here." Bring it on?

Any mother whose child has brought home the latest stomach flu from school because sick little Billy's parents didn't isolate him at home knows this approach makes no sense -- if, that is, the idea is to stop the contamination of the other members of the class.

Conservatives have been quick to blame "political correctness" for the Obama administration's welcome mat for Ebola cases, but the problem more precisely defined is this global outlook. To the globalist, nations count only as members of the collective. Love of country is subordinated to the needs of the not-so-new world order. That special pre-new-world-order feeling for one's own fellow citizens does not and cannot exist.

Thus, from the U.N. mother ship to its satellite in the Obama White House, the globalist position is in perfect alignment: No travel ban. This came through loud and clear at a recent White House press conference on the Ebola case.

"What are the conditions under which the President would order or want to see travel restrictions?" a reporter asked White House spokesman Josh Earnest.

"We are confident that the sophisticated medical infrastructure that exists here in the United States can prevent the wide spread of Ebola," Earnest said.

Translation: There are no such conditions.

"Doesn't that imply that we're willing to accept a certain number of people coming into this country who will be diagnosed and develop Ebola once they're here?" the reporter asked.

"We live in a global world, and what we're confident that we can do is to both protect the safety of the traveling public and ... protect the broader American public by rigorously applying the kind of medical protocols that are recommended by the Centers for Disease Control," Earnest replied.

Operative phrase: We live in a global world. Take cover.

Here's a Devastating, Little-Known Story About Bernie Sanders. Why Haven't His Rivals Exploited It?
Guy Benson