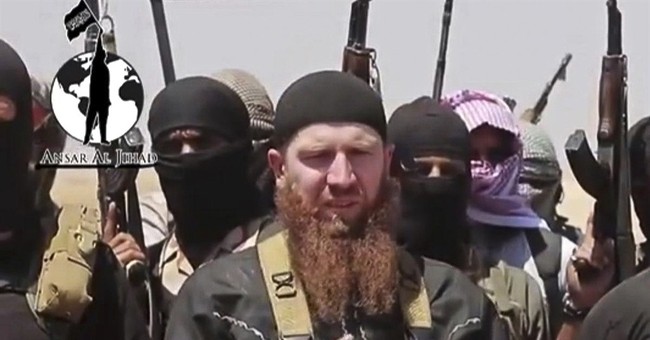 For logic-minded Americans still genuinely puzzled as to how it could be that our presidents and secretaries of state and generals and pundits keep hammering home the big lie that Islam has nothing to do with jihad, that the religion of conquest is a "religion of peace," I have a special warning. Such widespread, politics- and mass-media-driven brainwashing is nothing new.

It worked. Unlike Nazism, communism has never been judged guilty or even held responsible for the carnage and suffering it has caused. On the contrary, it remains a source of "liberal" statist ideas such as Obamacare. My book "American Betrayal" delves deeply into this dangerous double standard. In short, it not only enables collectivist policies to strangle our remnant republic, but also explains why American students can find a drink called Leninade, emblazoned with a hammer and sickle, for sale on a college campus. It is also why silkscreens of Warhol's Chairman Mao, history's top mass murderer, are sought-after items for the homes of the wealthy.

There are no such trendy portraits of Hitler, and who would want them? Who would want to swig a bottle of Hitlerpop, decorated with a swastika? So, why Leninade? Not only does the stench of death not follow the Communist murder-cult, the brand lives.

Barring a groundswell of common sense, I predict that Islam, the brand, will most likely remain separate in the public mind from the violence and repression it causes and has caused for more than a millennium. That's certainly the direction leaders from both political parties have been relentlessly herding us in for over a decade, insisting against all reason -- against all sacred Islamic texts -- that "Islam is peace."

This means that not only must we contend with this cycle of expansionist jihad -- a recurrence that should be familiar from Islamic history were it, too, not subject to whitewash -- we must simultaneously withstand a campaign of lies designed to subvert our understanding of how Islam, in fact, has everything to do with beheadings and other violence both in the Islamic world and in the West.

And yes, such whitewashing has happened before. Stalin's Red Army occupied half of Europe at the end of World War II, but Americans were told they had won the war and that "Uncle Joe" was a great guy. Then there is the whitewash of the transformation the Cold War wrought at home, where agents, agents of influence, fellow travelers, and dupes worked to advance Moscow's will just as Soviet tanks (and agents, too) imposed it abroad. The conventional wisdom, however, set forth by academics, historians, think tank analysts, journalists, filmmakers (whether "liberal" or "conservative"), remains suspended in the amber of the "Red Scare," the 1950s period during which anti-Communist "witch-hunters" searched for "Reds under the bed," allegedly in vain. Never mind that many hundreds of American traitors had infiltrated the federal government in previous decades. The important thing, says the conventional wisdom, is not to connect the dots and examine whether these proxies for Stalin influenced the "American Century."

That, of course, is exactly what "American Betrayal" does, thus enraging all keepers of conventional wisdom. No matter. The more I learn about the extensive penetration by Stalin's secret agents into the federal government over the two decades that FDR and then Harry Truman held the Oval Office, the clearer it is that the American ship of state had too many hands loyal to the USSR pushing at the rudder, influencing, to varying degrees, the direction of U.S. policy and strategy, even if not especially during World War II.

Such is the once-hidden history that comes into closer focus since the U.S. and Russian governments released some subset of their vast secret archives -- intelligence documents, FBI files and the like. Reigning "court historians" keep looking the other way, hoping Americans never notice the big picture: that FDR presided over the biggest national security disaster in U.S. history, the massive infiltration of the U.S. government by agents of a foreign power.

Ken Burns' new PBS documentary, "The Roosevelts," typifies this blackout. For example, take the series' treatment of the Yalta Conference, the final meeting of the so-called Big Three wartime leaders. Old news footage shows the conference table, from Stalin to FDR to Churchill. The camera also shows a man who sure looks like Soviet military intelligence agent and U.S. State Department official Alger Hiss. Next to him is top White House aide and, according to some experts, Soviet agent or asset Harry Hopkins. Both men are seated behind the dupe-ish secretary of state Edward Stettinius.

Does Burns inform viewers of the identities of these notorious figures seemingly "boring from within" before the viewer's eyes? Does he note the existence of scholarship confirming covert agent Hiss' outspoken role at the conference, and evidence that he may have exerted influence over deliberations on China policy, war reparations including German slave labor, and other vital issues in the USSR's favor? Is there any mention of the troubling questions about Hopkins' single-mindedly pro-Soviet stance that caused George C. Marshall to describe "Hopkins' job with the president" as being "to represent the Russian interests"?

Silence. Or rather, Burnsian chatter about the big secret of Yalta being FDR's grave health -- something obvious to anyone who looked at him. The series' ultimate mission is accomplished, however. A re-gilded FDR is burnished to a starry sheen, blinding a worshipful audience. Is that what history is for?