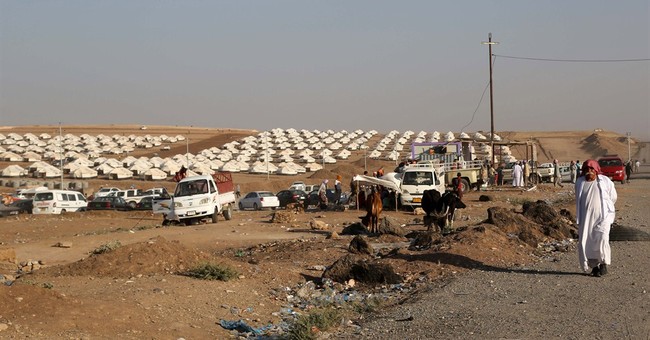 It's just seven minutes of airtime out of millions since 9/11, but a recent segment of "The Kelly File" on Fox News bears notice. It's as good an example as any of the state of paralysis that still afflicts the public square since jihad struck Manhattan and Washington, D.C., 13 years ago. We have mourned our dead, fought wars, rebuilt cities, but something still is missing. That something is informed talk about Islam. Frank discussion of the Koran and Muhammad. Without it, there is no stopping the jihad that is shutting down Western civilization.

Host Megyn Kelly interviewed Maajid Nawaz about the Islamic State (ISIL), the latest Muslim horde on a jihad to establish a "caliphate" (pan-Islamic regime) based in sharia (Islamic law). Nawaz could be considered a defector from Hizb ut-Tahrir, one of the revolutionary Islamic groups, some violent, some removed from violence, dedicated to the establishment of a caliphate based in Islamic law, from al-Qaida to the Organization of Islamic Cooperation (OIC).

Nawaz said goodbye to all that in 2007, he says. In 2008, he and fellow defector Ed Husain founded Quilliam, a British "counter-extremism" foundation named for William Quilliam, a 19th-century British convert to Islam. Abdullah Quilliam, as he became known, opened the first British mosque on Christmas Day, 1889. "Co-exist," right? It's no stretch, however, to imagine Sheikh Quilliam at home in Hizb ut-Tahrir as a fatwa-issuing advocate of the caliphate and sharia both. He also issued a fatwa prohibiting Muslims from fighting for or assisting Britain ("contrary to the sharia"), then fighting Muslim tribes in the Sudan.

Scholar of Islam Andrew Bostom first brought these fatwas to my attention, but they are now accessible on Abdullah Quilliam's Wikipedia page. Should we take a "counter-extremism" think tank in Quilliam's name seriously? Could the name have been a mistake? Or is it a joke on gullible infidels? A wink to stealth jihadists?

This piqued my interest in Kelly's Nawaz interview. Zeroing in on the ISIL beheading of Steven Satloff, she asked: "Where does their thinking come from? ... The first reaction many here in the United States and around the world had was these people who are doing this are psychopaths."

Really? Such mystification wasn't my first reaction. I know where their thinking comes from. It comes from Islam. Who doesn't know that but the highly educated and politically empowered? Not for nothing does the immutable Koran say (Surah 47, Verse 4): "Therefore, when ye meet the unbelievers, smite them at their necks," among other directives of open-ended jihad. Then again, take the life of Muhammad, Islam's "perfect man." He followed his jihad campaign against the Qurayzah, a vanquished Jewish tribe, by beheading all of the 600 to 900 men in the tribe, setting the example for Muslims through the ages. Mohammed also condemned the tribe's women and children to slavery, keeping some women for himself and his companions, which, bonus, set an example of jihad sex slavery.

Surely this suggests it's the extremism of Islam that requires "countering." Will Nawaz agree?

Of course not. In response to Kelly's question, he repeatedly blames a generic "ideology" that must be "undermined."

Kelly asks: "You can't help but look at the killer and think, 'How could he possibly have come from anything resembling humanity?'"

Nawaz replies: "Yes. Of course we've seen this before, we saw it with Nazism in Nazi Germany and that phrase, 'the banality of evil.'"

Wait a sec. Have we been hearing "Allahu Akbar," or "Heil Hitler" on all those Islamic snuff videos? Never mind. With a few cliches about "group think" and "the new normal," Nawaz is back to calling on society to work "to undermine the ideology that underpins (these acts)."

Kelly asks: "Do you feel the Muslim community has been vocal enough in doing that?"

Nawaz pivots in reply. "I think no one's been vocal enough. I mean, look, Muslims need to do more, but so, frankly, does President Obama." He then raps Obama for announcing he had no Islamic State strategy -- but, hey, our best pundits have no state of Islam conversation. "So, Obama needs to do more," Nawaz continues. "Mainstream society needs to do more. One way in which mainstream society can do more is to accept that this isn't a clash of civilizations between Islam and the Western world. But in fact, it's an intra-religious struggle within Islam."

My ears pricked up. "Accept" what? Answer: that this crisis of our age, the Islamization of the West, is only so much intra-Islamic jockeying. That we should shut up about the demonstrably Islamic nature of the attacks on the West, on our liberties, our security, on our allies, our children, our law and culture, and not fight back against them. "Accept" that Muslims will work it all out among themselves -- not that Islam, of course, has anything to do with it.

This is dangerous, deceptive nonsense.

Then again, how might Nawaz's way work? One quick way to "counter" "extremism" is to prevent ISIL fighters from returning to their Western countries by canceling their passports. But Nawaz opposes this no-brainer. On Twitter, he called it unimaginative, adding: "Passports can be faked." Huh?

Quilliam co-founder Ed Husain (now at the Council on Foreign Relations) elaborated in an op-ed. Canceling passports of "hardline Islamists," he wrote, could cause them to target the U.K. because they would see Britain as having "nullified" their "apd al amaan" -- or "covenant of security" -- which they believe Britain offers.

Thus, what amounts to an "extremist" protection racket should remain in place, at least according to the "counter-extremism" specialists.

"Deradicalize" ISIL fighters, Husain advises. That may counter extremism, Quiliam-style, but it's no way to fight jihad. Of course, maybe that's where the West is at, circa September 2014. As Megyn Kelly asked Nawaz, wrapping up: "How can we turn more extremists the way you were turned?"