Why Does a Pentagon Shape the Oval Office? 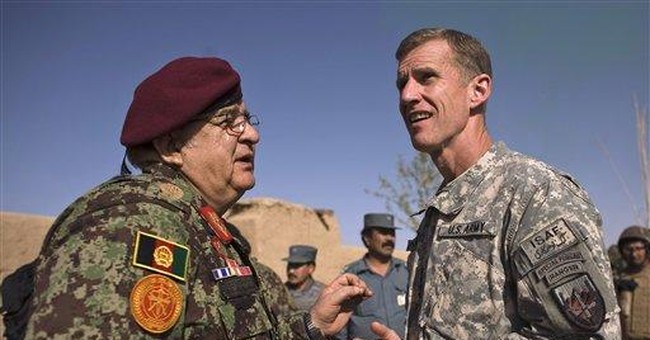 Bob Woodward's latest publishing event, "Obama's Wars," includes maybe the most significant scoop of his career: Directing not only Obama's wars, but also America's, is a veritable military junta.

I exaggerate -- some. Frankly, I don't know how else to assess the information in Washington Post excerpts of Woodward's coverage of the deliberations leading up to President Obama's decision last year to send 30,000 additional troops to Afghanistan. The stories -- anonymously sourced as usual and, as such, questionable even as they undoubtedly influence subsequent coverage -- describe a president frustrated, ill-served and finally overwhelmed by military muscle concentrated in the hands of Defense Secretary Gates, Joint Chiefs Chairman Mullen and then-CENTCOM chief Petraeus (all longtime regulars, if not favorites, of this column). Headline No. 1 says it all: "Military thwarted president seeking choice in Afghanistan." If the military "thwarts" a president, the president isn't in charge, which is not a good thing unless military dictatorships are your bag.

As Woodward frames the behind-the-scenes struggle, Obama "was looking for choices that would limit U.S. involvement and provide a way out." Meanwhile, "his top three military advisers were unrelenting advocates for 40,000 more troops and an expanded mission that seemed to have no clear end."

But the problem wasn't that the military men pushed their pet strategy, it was that they failed to present the president with alternatives as asked, bidden and ordered.

For example, Woodward writes: "When Mullen learned of the hybrid option" -- Vice President Biden's plan to eschew nation-building and focus on Taliban-hunting and training Afghans -- "he (Mullen) didn't want to take it to Obama. `We're not providing that,'" he told Joint Chiefs Vice Chairman Gen. James E. Cartright.

Obama heard about the option anyway and "instructed Gates and Mullen to present it." Woodward continues: "Mullen had other ideas" -- namely, a war game exercise "to support his case against the option." What comes next describes something rotten in the chain of command. According to Woodward's reporting, the Joint Chiefs Chairman went on to rig the wheel, in effect, against the hybrid option by failing to take it completely through war game exercises -- a halfway effort attended by Mullen and, not incidentally, Petraeus. At a meeting with Obama a few weeks later, Woodward writes, "Petraeus cited the war game as evidence that the hybrid option would not work. ... 'OK,' Obama said. `If you tell me that we can't do that, and you war-gamed it, I'll accept that.'" Then: "No one contradicted the claim."

But it's hard to imagine Obama firing anyone over this case. What also comes across in Woodward's account is a weak-in-the-war-making-department president who recoils from the potential consequences of overruling the military: namely, the resignations of people blocking the very policy changes he set out to enact. Why he flinches, I don't know.

According to Woodward, Obama said he wanted to devise a way out of, not deeper into Afghanistan; he even wanted to move away from the insupportable nation-building that lies at the theoretical root of the perfect "counterinsurgency." (I agree with both goals while realizing the meeting of the minds likely ends right there.) Neither goal is central to the "surge" as finally ordered. Obama's "decision" to send 30,000, not 40,000 troops, is marginal, while his 2011 "withdrawal" has been publicly discounted from the beginning.

So, Obama's war is, in fact, an expanded mission that has no clear end, something that seems to suit his leading general fine. "I don't think you win this war," Petraeus is quoted as saying privately. "I think you keep fighting. It's a little bit like Iraq, actually ... Yes, there have been enormous progress in Iraq. But there are still horrific attacks in Iraq and you have to stay vigilant. You have to stay after it. This is the kind of fight we're in for the rest of our lives and probably our kids' lives."

Call it a 100-year-war. By that point, if we get there, the Oval Office will have long become a pentagon.