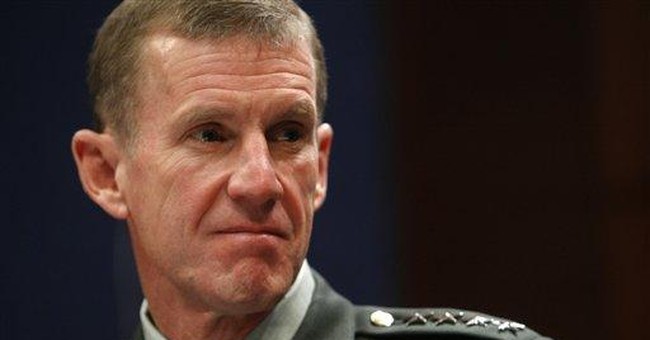 The story concerns "failures" all right, but the three recently investigated incidents in question are not "battlefield" failures. No, these failures, whose names are Wanat, Ganjgal and Kamdesh, have their provenance in the climate-controlled conference rooms of the White House and the Pentagon. These are failures of U.S. military policy, and it is the top leadership of the current and last administrations, those who have formulated, approved and executed the policy, who are responsible for them -- not the mid-level officers, the squadron leader or battalion commander, who, according to the Post story on the unreleased investigations, will be taking the official fall.

I refer, of course, to the policy of "counterinsurgency" warfare, particularly as promoted by Gen. Stanley McChrystal, the supreme infidel commander now waging a popularity contest against the Koranically correct Taliban for the affections of the Islamic peoples of Afghanistan. The prize, booby at best, is supposed to enable the United States, at Treasury-breaking and military-wrecking cost, to tame wild Afghanistan into a non-dysfunctional, jihad-free society. Our main weapons: "population-protection," cash and massive public works projects. (Sending troops so equipped into valleys of death like Wanat, Gankgal and Kamdesh is pure "counterinsurgency" negligence, I mean, doctrine.) The Taliban's main weapons: the Koran, jihad and Sharia. After eight-plus years, the Islamic peoples of Afghanistan still can't decide between us. Still, we keep trying, pursuing the unicorn of hearts and minds across Afghanistan even as the reality of Islamic law spreads unchecked across the West.

One place we tried too long is the Nuristan province village of Kamdesh. There, in August 2006, a foothold later known as Combat Outpost Keating was established on indefensibly low ground ringed by mountains as a Provincial Reconstruction Team. Whose criminally stupid idea was it to put an outpost there and leave it there? I doubt investigators asked.

The mission was "nation-building at a local level," as Salon's Matthew Cole reported in 2007. Under continual attack, however, the troops had switched from dispensing goodies to "simply securing the base" -- and for three, pointless years until Oct. 3, 2009. On that day, the battle of Kamdesh left eight Americans dead over a piece of real estate that -- and this is key -- the United States had already planned to abandon. Whose negligence delayed the evacuation? I don't think investigators asked that, either.

Fact is, Keating and some other outposts were scheduled to close in July 2009 -- not, alas, in recognition of the futility of "counterinsurgency," but of fighting it undermanned in remote areas. As Maj. Gen. Curtis Scaparrotti explained McChrystal's outpost-closing order to the Washington Post, "This is all about freeing up some forces so I can get them out more among the people."

But not so fast. Seems that also in July, the Post notes, Afghan President Hamid Karzai asked "senior U.S. officials" to send U.S. troops to secure Barge Matal, a remote Nuristan village, before the Aug. 20 elections. What should have taken a week stretched into months, with "ripple effects throughout eastern Afghanistan, forcing frustrated U.S. military officials to postpone plans made months earlier to abandon other remote bases."

NBC's Richard Engels reports: "Four American soldiers were killed from July through September while securing Barge Matal. But this was only the beginning. Five more American troops were killed on Sept. 8 in nearby Ganjgal, in part because resources they required (air and drone support) were diverted to help the soldiers in Barge Matal. If air assets are sent to one area, they must be pulled from another. The knock-on effect of Barge Matal" -- where, Engels writes in a bitter coda, ballot boxes were stuffed, literally, with 10 times more ballots than the number of citizens in the town -- "appears to have also indirectly contributed to the deaths of the eight American soldiers at COP Keating."

Barge Matal aside, almost seven weeks passed between the election and the attack on Keating. Why wasn't Keating at least closed in the interim? Where does McChrystal's buck stop?

Then again, maybe nothing short of disaster was ever going to shut down Keating. Roughly 10 days before the Oct. 3 attack, the Washington Post reports, Col. Randy George, who oversees U.S. forces in eastern Afghanistan, told commanders at Keating and Lowell, another remote outpost, to prepare their bases ... for the coming winter.

I wonder if investigators asked why.