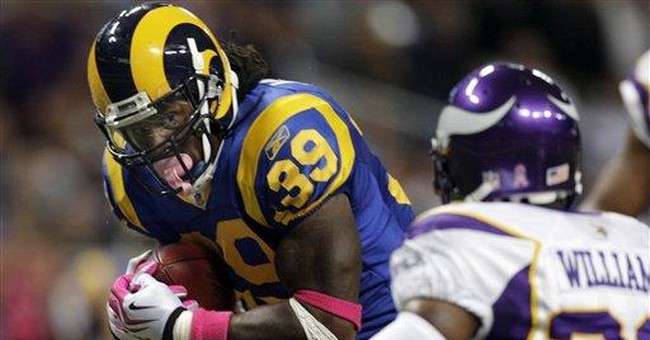 Before I get to the chilling implications for free conservative speech underscored by the vicious, public campaign to blackball Rush Limbaugh as a potential owner of an NFL team, I want to provide a little context about the pre-existing NFL comfort zone of expression.

I will start with two words: Keith Olbermann. In addition to his nightly gig on MSNBC -- a numbing blend of Leftist politics and something approaching Tourette's syndrome -- Olbermann is a co-host of NBC's "Football Night in America," the pre-game show that leads into "Sunday Night Football." Naturally, that would be Sunday night NFL football.

This job, now into its third season, makes Olbermann not a team owner, of course, but certainly a public face of the NFL. And a public face of the NFL with many filthy things coming out of it. These include, just sampling from recent days, his pronouncement that Limbaugh claiming his own success paved the way for Glenn Beck is "is like congratulating yourself for spreading syphilis." We could slap a headline on that -- "NFL talker compares star radio and TV conservatives with venereal disease" -- except that trash talk against conservatives doesn't generate mainstream media outrage.

Take Olbermann's noxious attack this week on Michelle Malkin for what he characterized as her "total mindless, morally bankrupt, knee-jerk, fascistic hatred without which Michelle Malkin would just be a big mashed-up bag of meat with lipstick on it."

Get that? Olbermann calls an accomplished and best-selling conservative author, commentator, blogger, wife and mother (who also happens to be beautiful) a "big mashed-up bag of meat with lipstick," but such dehumanizing venom doesn't count as controversial, or even lightly strain his NBC-NFL connection. Why, at this rate, he could end up on a box of Wheaties. His comments certainly don't rate as "divisive" or "inappropriate" - two of the coded charges leveled at Rush Limbaugh's "public remarks" by NFL Commissioner Roger Goodell and Indianapolis Colts owner Jim Irsay that got Limbaugh's blackball rolling in the first place.

It was all over so fast. Barely a day passed between the news that Limbaugh was bidding with Dave Checketts for the St Louis Rams and the news that Checketts was dropping Limbaugh as a partner.

But what a day. It goes down in the annals as the day the demonization of conservatism achieved not consensus, but normalcy, and the day the marginalization of conservatives became not a public sport but a civic duty. Think about it. What happened Limbaugh didn't happen to a "dead white male" on a college campus; nor did it happen to a live white male in a government-mandated "sensitivity course." What happened to Limbaugh took place in a uniquely exclusive slice of the private sector frequented by the super-mega-rich and ostentatious, the kind of people with the kind of money that buys protection from the pressures of what is thought of as public opinion. But what happened to Rush Limbaugh - call it "Rush-baiting" -- reveals that what conservative blogger Lawrence Auster calls the "dictatorship enforced by the charge of racism" has absolutely no boundaries.

Limbaugh's critics were so desperate to make a racism charge stick, to tag Limbaugh as untouchably "controversial," that they resorted to demonstrable lies -- statements Limbaugh never made -- and purposely indemonstrable innuendo. Not that this mattered. As in all dictatorships, the charge itself suffices. It didn't even matter that the dictatorship's emissaries, the eternal charlatans Al Sharpton and Jesse Jackson, who actively lobbied the NFL to oppose Limbaugh, are themselves serially discredited race hustlers. Again, the charge is all it takes to demonize and ostracize the opposition. And Rush Limbaugh -- as the leading voice against the radicalism of the Obama administration, one of the most forceful opponents of the totalitarian social engineering we know as "affirmative action," as one of the great communicators of basic conservative principles -- definitely counts as the opposition.

But with the successful transformation of Limbaugh the potential team owner into Limbaugh the expendable "distraction," his brand of opposition -- a plain-speaking adherence to a conservatism best described as Reaganesque -- has been judged unfit, unworthy even, for the sports-loving mainstream and sentenced to the margins. And that is what is most disturbing about this story. Conservatism in our time has been publicly defined as extremism. Which means, for conservatives, it's time for some intensive historical revisionism of our own.