Where Were You Born, Obama? 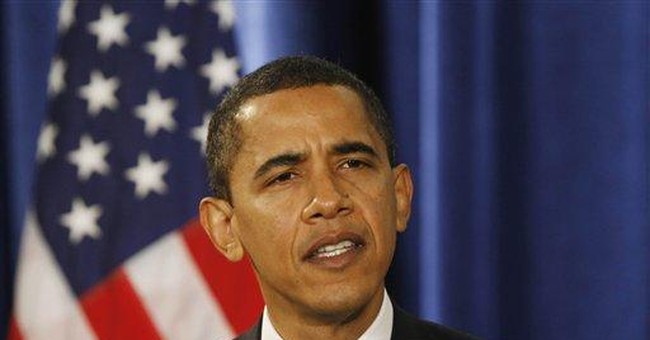 And I mean nothing to do with any of it. There was an almost comical aspect to the spectacle of journalists across the mainstream media (MSM) suddenly, as if on command, assuming pretzel positions in a contortionist's effort not to seem at all curious, for instance, about the discrepancy between David Axelrod's recent declaration that the president-elect had discussed Senate-seat replacements with Blagojevich, and Obama's more recent declaration that he had done no such thing.

The MSM instantly agreed: Obama had nothing to do with it. Such a message took Obama out of the story even before the story itself was clear.

This mantra, this strategy should be familiar by now. Whether it is Jeremiah "G -- d -- - America" Wright, William "We didn't do enough" Ayers, or now, Rod "F -- - him" Blagojevich, Obama is never a player, never even a responsible presence in controversies involving associates past and present. In the media-filtered version of events, he's just not even there. But in no story is what we may one day come to think of as Obama's invisible man-hood more obvious than in the still-roiling controversy over Obama's birth certificate.

What controversy? Anyone who relies solely on MSM outlets (and most conservative outlets) may not even know that Obama has, to this day, not authorized the state of Hawaii to release his Certificate of Live Birth -- the "long form" -- to prove that he is a "natural born citizen" (NBC), a Constitutional requirement of all presidents. Instead, We, the People, have online access to an Obama document known as a Certification of Live Birth, which, as Randall Hoven explains at American Thinker blog, is a computer-generated short form that is not even accepted by the Hawaii Department of Home Lands as adequate verification of Hawaiian identity. (The Home Lands Department requires "information that is found only on the original Certificate of Live Birth," or long form.) Further dimming the online document's Holy Grail aspects, it has been altered -- the certificate's number has been redacted -- which, according to a statement printed on the document, actually invalidates it.

But that's not all. Back on Oct. 31, Hawaii's director of health, along with the registrar of Vital Statistics, released a statement verifying that the Hawaii's Department of Health has Obama's "original birth certificate on record in accordance with state policies and procedures."

Well, that's just great. But no matter how many times this statement from "Hawaiian authorities" is cited as the NBC clincher, it doesn't prove a thing. It turns out, as Hoven reports, that Hawaii issues birth certificates even for babies born elsewhere, so simply having an original Hawaiian birth certificate "on record" doesn't answer the key questions. Namely: What exactly does this original birth certificate say? And why doesn't Obama simply authorize the document's release and be done with the question?

This is some of the background to the birth-certificate controversy. According to the same MSM reporting that omits Obama from everything, however, the controversy is the sole, self-inflicted creation of people unreasonable enough -- no, kooky enough -- to be concerned about the issue. This includes citizens who have gone to court (up to the U.S. Supreme Court) in more than a dozen states with various NBC-related complaints, all of which could be resolved by the release of Obama's original birth certificate. It also includes followers of radio shows or Internet forums including KHOW's Peter Boyle in Denver, the blog Atlas Shrugs and the news Web site WorldNetDaily.com, which have aggressively covered the story.

In the MSM's no-Obama version of events, though, such efforts and interest are mocked as the freakiest kind of lunacy. And this same MSM argument has lately been trumpeted by prominent conservative voices.

"Shut up about the birth certificate," David Horowitz wrote this past week.

Shut up? Is he kidding? Apparently not. Horowitz went on to tell "fringe conservatives" and "birth-certificate zealots" that their "continuing efforts" to "deny Obama his victory" are "embarrassing and destructive." NRO's Mark Krikorian, in turn, congratulated Horowitz for "stomping on the ridiculous, bitter-ender efforts to disqualify Obama from the presidency." Michelle Malkin, too, pooh-poohed the "birth-certificate hunters," describing them as having "lurched into rabid Truther territory."

("Truthers," by the way, are people who believe the United States engineered the attacks of 9/11.)

I disagree. I think it is nothing less than good citizenship to seek to verify that Obama is a "natural born citizen" since our elites, which include the major political parties and the MSM, failed to bring the matter to its extremely simple resolution long ago.

Once again, Barack Obama is treated as though he were not even a part of this story. Those who seek to resolve the birth certificate controversy draw the fire, but not the man who causes it. Talk shows, court battles and blogs can air the issue, but it is only Obama who can put it to rest. And he can do it simply by authorizing the release of his original, "long form" birth certificate -- and quickly, preferably before the Electoral College meets to validate his election on Dec. 15, but certainly before his term of office begins on Jan. 20, 2009.

Unless, of course, he has something to hide.