Sweeping Away the Traditional from the Public Square 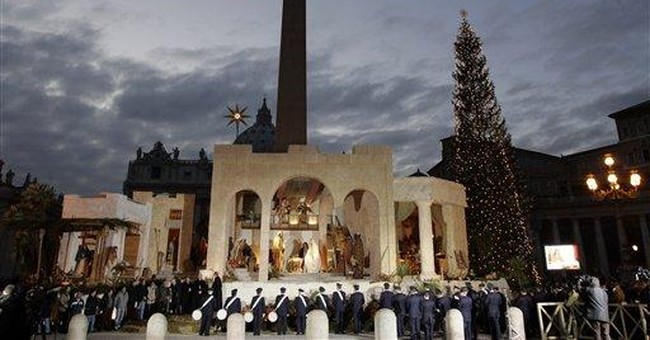 Americans may have just embarked on these most ritualistic weeks of the year stretching between Thanksgiving and New Year's Day, but something is clearly different this time around.

It isn't that the customary rites show signs of change. Americans roasted ceremonial turkeys by the million on Thanksgiving Day to sustain themselves as they hunt and gather goods to disperse during Hanukkah or on Christmas morning. There will be fewer big-ticket items and more discounted goods given this year, but that's not the difference. Nor am I sensing resistance to red and green, nor a break in the continuous loop of "Silver Bells" and "Silent Night" that, by melodic rote, choreographs the patterns of holiday behavior.

In other words, everything promises to look and sound what you might call traditional. But the fact is, "traditional" is out. The rock-solid assumptions on which society is built have gone wobbly, while the guideposts to "traditional" behaviors are, of course, long gone.

That's the lesson of the poisonously volcanic aftermath to Proposition 8, the ballot measure defining marriage as between one man and one woman, which California voters approved on Election Day by a margin of 52.5 to 47.5 percent.

How can "traditional" be out when what is now being labeled "traditional marriage" won at the polls?

To begin with, framing husband-wife nuptials as "traditional" marriage already implies the existence of alternative forms of wedlock. Indeed, the very act of throwing open the definition of marriage to a vote reveals how dramatically notions of the traditional have already changed, transformed beyond even recognition to prior generations.

In a state that Barack Obama won, 61 percent to John McCain's 37 percent, "traditional marriage" also triumphed, clearly but not overwhelmingly, due to strong support -- exit polling indicates -- from church-going voters, senior citizens, Republicans, a slim majority of Hispanic voters, and a whopping 70 percent of black voters. Yet the question remains: despite the will of the California electorate, how has tradition fallen from favor?

Tradition as pariah is the message of the past weeks of protests, boycotts, firings, condemnation and revilement of supporters of Prop. 8, not only by same-sex marriage activists but also by leading figures in the political, media, educational and entertainment establishments. This message tells us that the public square no longer enshrines, protects or even recognizes the traditional. Indeed, this central clearing house of society, where custom, rites, communication and conduct are vetted and approved, has aggressively ejected tradition and its supporters, going so far as to stigmatize the sacred, time-tested conception of marriage as being indecent, if not anathema.

And such cultural whiplash has been weirdly accepted if not welcomed by the traditionalists, if their overwhelmingly apologetic reactions to their own political and moral ostracism are any measure. Sure, they belong to a majority backed by thousands of years of civilization, but those who dared to vote, or worse, contribute money to "restrict" marriage to one man and one woman now seek to make amends and apologize for their loudly derided beliefs. From Scott Eckern, the musical theater director in Sacramento who, having been "outed" for contributing $1,000 to support Prop. 8, resigned under pressure, to Marjorie Christoffersen, co-owner of a well-liked Los Angeles eatery, whose $100 donation in support of "traditional" marriage brought hundreds of protestors to the restaurant, the response has been one of guilty contrition.

Not coincidentally, both Eckern and Christoffersen are Mormons. The brunt of the protests and public opprobrium has been directed at Mormons, whose church strongly supported Prop. 8, with many of its followers donating generously to the campaign. Of course, other churches support "traditional" marriage, including black churches, but anti-8 activists are not boycotting businesses owned by black supporters of Prop. 8. In a shameful display of easy-mark bigotry, anti-8 activists have instead seized on the weakest link in the pro-8 chain -- Mormons -- for public flaying. Indeed, anti-8 protestors continue to plan boycotts against enterprises owned by Mormon supporters of Prop. 8, from Cinemark Theaters to A1 Self-Storage. Some anti-8 activists are pushing a boycott of the upcoming Sundance Film Festival for its ties to Utah, headquarters of the Mormon church.

The point here doesn't seem to be simply to win fair and square at the polls, which, frankly, is a darn good bet for same-sex marriage proponents come 2010. This year's large black turnout, inspired by Barack Obama and said to have put Prop. 8 over the top, is unlikely to be duplicated in an off-year election. A lower black turnout might well clear the way for a fairly speedy democratic repeal of Prop. 8. No, this current anti-8 effort seems to be about something else. Something different. Something more like cleansing the public square, ostentatiously, of tradition and its followers.

I wonder whether just hanging a bunch more holiday lights will keep everyone from noticing.