Obama's "Radicalism" a Growing Chasm on Road to Victory 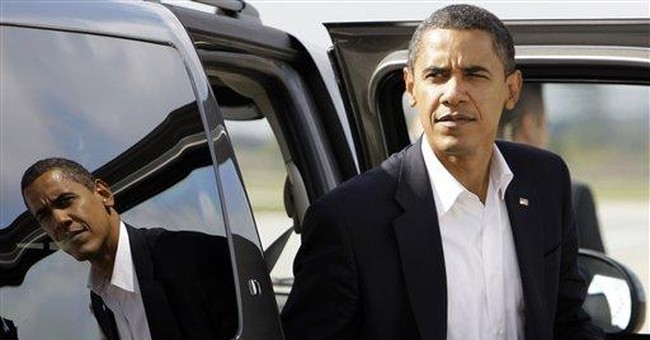 I realized something after Tuesday night's debate: If (big if) Barack Obama is not elected president next month, it will not be John McCain who defeats him.

McCain may be Obama's official opponent, but he isn't making the core case against him: namely, the case against Obama's deep roots in radicalism, which the Democratic nominee has never pulled up and grown away from. This is why if Obama loses on Election Day, it won't be McCain who defeats him. Like a flashy third-party candidate who ends up drawing just enough support from one candidate to put the other over the top, it is Obama's connections to anti-American extremism -- his incubation in a radical comfort zone home to ex-Weather Underground leader William Ayers, ex-PLO mouthpiece Rashid Khalidi, anti-white-and-anti-"middleclassness" minister Jeremiah Wright and others -- that will doom his presidential ambitions.

McCain, Obama and, coming up on the outside, Obama's radicalism: This three-way race has created a weird dynamic as the candidates turn into the final stretch. Blinkers on, McCain hobbles after Obama, who is now desperately trying to shake off the radicalism that could trip him up before the finish line. Again, no thanks to McCain, whose winks at Obama's radicalism, Sarah Palin's stumpside references notwithstanding, are not what has brought it to the fore. The fact is, Obama's ties to radicalism are taking on a life of their own.

Such a "life" is in no way documented in the mainstream media (MSM). Just consider our leading journalists' idea of professional responsibility when it comes to, for example, Obama's connection to unrepentant Pentagon bomber William Ayers.

Ayers -- a violent, 1960s militant who later decided that radicalizing education in the guise of "reform" was the front-line of revolution -- is infamous for a New York Times interview published on Sept. 11, 2001 in which he not only declared America "makes me want to puke," but also discussed his group's violent attacks on American military and civilian targets, asserting, "we didn't do enough." His working relationship with Obama, as documented by Stanley Kurtz, goes back to the 1990s when Obama served as chairman of a $150 million charity, which Kurtz describes as Ayers' "brainchild," that doled out money to far-left groups such as ACORN. Funny, as Kurtz has noted, Obama never mentioned these five years of what is his only executive experience in either of his two memoirs. Not so funny is Obama's dishonest description of Ayers as "just a guy who lives in my neighborhood."

MSM coverage of the relationship has been hardly more forthcoming. It runs from demonstrable whitewash -- as put over in the New York Times, which, in nixing notable ties, omitted all mention of copious, previously published evidence to the contrary -- to overt damage control, as conducted by the Associated Press. The AP actually argued that Palin's reference to the Obama-Ayers relationship as Obama "(palling) around with terrorists" conveyed a "racially tinged subtext." Huh? According to the AP, Palin's remarks were racist because "terrorists are envisioned as dark-skinned radical Muslims." Therefore....

Are they kidding? In a word, no. But such efforts may signal a desperate response to growing, inchoate unease in the land, a silent, or sighing, or very privately discussed queasiness over the prospect of making an American president out of a man who not only didn't cross the street to shun a punk like Ayers, but was so comfortable with Ayers -- who, not incidentally, in 1995 described himself as "a radical, Leftist, small 'c' communist" -- that Obama launched his political career from Ayers' living room, also in 1995.

This relationship continued, as even the New York Times perhaps inadvertently reported: Obama "said they have not spoken by phone or exchanged e-mail messages since Mr. Obama began serving in the United States Senate in January 2005." Ask yourself: What American president -- any party, any era -- would have maintained correspondence with Mr. America "makes me want to puke" for that long? And about the year 2005: Isn't that roughly when Obama decided to run for president?

Americans may be fuzzy on the details -- and how could they be clear, given the media's pro-Obama activities -- but some are realizing, slowly and with no corroboration in the public square, that such radical ties don't pass presidential muster.

Or do they? In the end, the answer will decide the election. Meanwhile, we, the people, are on our own. Once, America's political and media and social institutions would have reflexively rejected a presidential candidate with an alliance with, or even an affinity for, an unrepentant terrorist and anti-establishment revolutionary. No more. The line between the establishment and the anti-establishment has vanished -- at least as far as our political and media and social institutions are concerned. But there remain citizens for whom such distinctions matter.

Writing at National Review Online, Andrew C. McCarthy pegged the significance of the Obama-Ayers connection: "Yes, Ayers is blunter than Obama. As he so delicately told the Times, America makes him `want to puke.' The smoother Obama is content to say our society needs fundamental `change.' But what they're talking about," he wrote, referring to their complementary visions, "is not materially different. Such sentiments should make Obama unelectable."

Actually, such sentiments should make Obama radioactive. But ours is a culture of relativism in which one "belief system" is considered as valid as any other. Democracy? Marxism? Whatever! Lawful elections? Bombing the Pentagon? What's the difference? So greatly transformed by relativism is our society that not even elder statesman and veteran John McCain is alarmed by Obama's radicalism. If he were, this patriot who puts "country first," would be doing everything in his power to warn the American people against it.

Not that it matters, not now, not since Obama's radicalism entered the race. If this stalking horse finishes strong, Obama loses and America wins -- despite the other candidate.