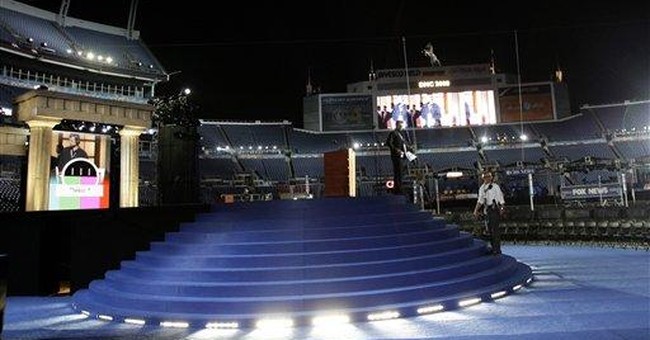 The star of the Democratic National Convention wasn't Michelle Obama, Hillary Clinton, Hillary's husband -- certainly not Joe Biden or even Barack Obama. The single-most riveting presence at the Democratic gathering -- possibly the entire Democratic political season -- was that kooky-bizarro set with the faux-marble columns straddling the 50-yard line of Invesco Field in Denver. In this veritable neo-Graeco-Roman-Graceland temple, the Anointed One became the Nominated One.

Or so I assume. Confession: I wrote on the morning of Obama's evening acceptance speech, confident that nothing could speak more volumes to the American people than the sight of this grandiose venue deliberately crafted for the address. Besides, even as Obama's media squeezes are still pounding out the anticipatory PR hearts and flowers -- the Washington Post breathlessly reveals that Obama was earlier "crafting a first draft by hand on yellow paper" -- the bookies have already reduced the speech to a probable set of cliches. Not only was it a sure thing that the nominee would use the phrase "I accept," but bookmaker Paddy Power also gave 12-to-1 odds that he would use the phrases "I'd like to thank my wife," "as I stand here today," "fundamental belief" and "defining moment."

Zzzzz... Sorry. Whatever is remembered about what Obama said, the essential point is this: He decided to say it at a plywood Parthenon by klieg light. At least, I hope he did. I hope he stood firm against the early guffaws elicited by those first fuzzy photos to appear during convention week depicting the temple columns rising amid 76,000 seats and 450 spotlights in Mile High Stadium, a sight that increasingly looked less Leni Riefenstahl and more "This Is Spinal Tap."

After all, the Obama campaign hasn't been immune to similar criticism. According to the London Telegraph, John McCain's commercial depiction of Obama as a vapid "celebrity" after his last rally for the masses in Berlin effectively sent all manner of vapid celebrities into hiding during the convention. This was because, the paper reported, convention planners had ruled against pop stars making cameo convention appearances -- an indication of "how Republican rival Sen. John McCain's effort to turn Mr. Obama's fame into a weakness has rattled the Democratic campaign."

Can't wait what to see what effect Vladimir Putin has on it. But I digress. The fact is, your Ben Afflecks, your Josh Brolins, your Annette Bennings came to Denver, but "mostly kept a careful distance from the main arena and Michelle Obama" because they feared "their presence could be detrimental." The paper continued: "Oscar-winner George Clooney, an avowed Obama supporter, even took the unusual step of issuing a statement to deny he was in regular contact with" Obama. "I have never texted or e-mailed Sen. Obama," the Telegraph quoted Mr. Clooney as saying.

Must have been a slow news day. Of course, celebrity sensitivity and Temple Obama could be connected. Maybe in its efforts to ditch the celebrity image, the Obama campaign thought up the idea for Obama to strike a super-statesmanlike pose on a super-serious set -- Ancient Greece or Rome or whatever. Who are you calling a vapid celebrity now?

But this has left Obama with another problem: Having chosen to accept the nomination for president of the United States in a setting more suited to a Roman emperor if not the oracle at Delphi, what will his fellow citizens -- still not subjects, after all -- think?

Frankly, what the tank ride did for Michael Dukakis, the plywood Parthenon just might do for Obama. Then again, this entire event, seemingly a miscalculation of epic proportions, could have been an example of perfect political acumen. For example, before becoming transfixed by Temple Obama, I was reading up on Obama's relationship with ex-Weather Underground member and unrepentant Capitol- and Pentagon-bomber William Ayers -- news of which the Obama campaign has been eager to downplay if not squelch entirely. I was also trying to unravel the ties between Obama, Obama's unsavory fundraiser Antoin "Tony" Rezko, and Rezko's unsavory money source Iraqi-British billionaire Nadhmi Auchi. (This is another story journalists are being pressured not to cover, as Andrew Walden at Accuracy in Media has shockingly and extensively documented, in this case by Auchi's legal eagles.) And who knew Obama's veep nominee Joe Biden had Rezko connections through a longtime associate named Joseph Cari Jr., who admitted involvement in a Rezko kickback scheme? And on it goes.

But then, suddenly, Temple Obama went up, and with it, like incense in the fire, all patience for hard news. Maybe this comes under the age-old Roman heading of bread and circuses. Eureka! All Hail Barackus Husseinus Obamaius.