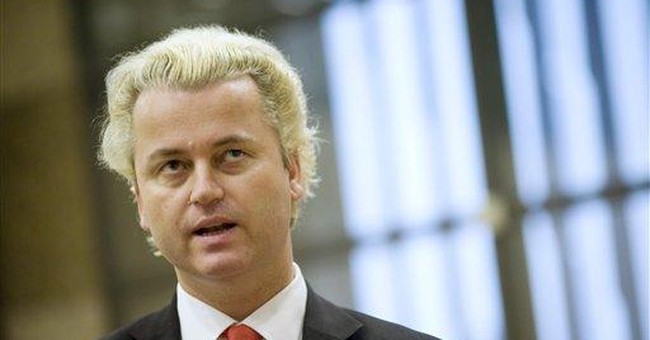 Any day now, a short film connecting the Koran to Islamic violence is expected to be released.

The film is by Geert Wilders, a Dutch member of parliament who wants to reverse the Islamization of Europe and believes the Koran should be banned along with Hitler's "Mein Kampf" for inciting hatred and violence. The film is called "Fitna," Arabic for upheaval. And just the thought of "Fitna" has Europe in an upheaval, anticipating Islamic outrage expected to range from diplomatic huff, to economic boycott, to rioting, even bloodshed over this still unseen, 10-minute film.

Similar mass psychosis has erupted before -- Satanic Verses Rage, Koran Rage, Cartoon Rage, Pope Rage, even Teddy Bear Rage. But never has an Islamic "rage" begun to build without actual cause. For the first time, we are seeing rage preparations and precautions before "offense" has been given or taken.

In other words, Pre-Emptive Rage is something new. It works like this: Because Wilders' film is expected to criticize Islam, Muslims who brook no religious criticism are expected to freak out. Therefore -- just as if this were the most normal, everyday, ordinary state of affairs -- Muslims and Europeans are making their respective arrangements.

In Afghanistan, Muslims have been igniting Dutch and Danish flags (did I mention Danish Cartoon Rage is back?), threatening to eject Dutch and Danish troops, and practicing their "Death to America" chants. Iranian officials have promised diplomatic rupture and worse if the film comes out. Meanwhile, the Dutch have embarked on a veritable world tour of pre-emptive appeasement. The MEMRI Blog reported that the Dutch government sent a letter disavowing Wilders to Egyptian Sheikh Muhammad Sayyed Tantawi, Sunni Islam's foremost figure (who has variously called for "jihad" against U.S. forces in Iraq and sanctioned suicide bombings against Israeli women and children). The Sheikh's response? He "demanded that the Netherlands government take more action against Wilders, and added that protection given to those harming Islam will negatively affect Egyptian-Dutch relations."

Pre-emptive "Fitna" rage has made European elites hopping mad -- only not at the rioters and blackmailers (the healthy, normal reaction), but at Geert Wilders. Here, multiculti Europeans and perpetually aggrieved Muslims are finding common ground.

Thus, as reported by Dutch blogger Klein Verzet, the Grand Mufti of Syria, Ahmad Badr Al-Din Hassoun, admonished the European Parliament about film-related "riots, bloodshed and violence" for which "Wilders will be responsible." And thus Dutch prime minister Jan Peter Balkenende said exactly the same thing (in between begging Wilders not to release his film). The online Dutch site NIS News Bulletin reported Balkenende has "stressed repeatedly and with irritation that Wilders and no one else was responsible for any violence that might break out after his film's release."

And when Sheikh Tantawi indicates that providing "protection" for Mr. Wilders is a bad idea, it not only sounds like a mafia don calling for a hit, it also echoes the dean of Dutch journalists, Henk Hofland. As Thomas Landen of The Brussels Journal reported, Hofland urged the Dutch government to withdraw state protection from Wilders, who lives under constant threat of assassination. "Let him feel what it is like for those whose lives he endangers," said Hofland, adding that any murders committed in retaliation for Wilders' opinions on Islam would be the responsibility of Wilders, not the murderers.

Such thinking reveals a disconnect from both reality and morality. Killers, not a movie, kill people, and killers are duly responsible. But there's more to consider: The unified effort of Muslims and Europeans to censor a critique of Islam for being a critique of Islam -- something not tolerated under Islam. From EU to NATO officials, from the head of France to (sadly) the head of Denmark, the official European response to "Fitna" is less in line with Western traditions of free speech than with the censorship of Islamic law. Indeed, Dutch officials couldn't find a Dutch law under which to ban "Fitna," and they tried. The pressure to silence "Fitna," however, reveals the extent to which Islamic law has already eroded core conceptions of Western liberty.

Wilders refuses to submit. "I'm not bound to any Afghan or Sufi or Pakistani law," he told The Spectator. "I am bound to the Dutch law and I'm sure that my movie will be within all the boundaries of the Dutch law."

But who besides courageous Wilders will act to uphold Dutch law against Islamic-style censorship?