Devon Herrick
|
Posted: May 04, 2016 12:15 PM
Share   Tweet
The opinions expressed by columnists are their own and do not necessarily represent the views of Townhall.com. 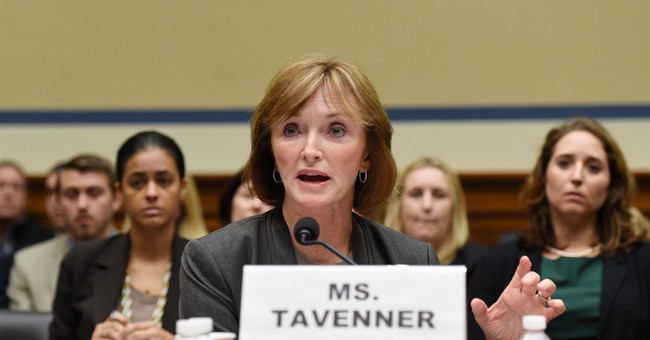 The second most powerful woman in health care, Marilyn Tavenner, helped implement Obamacare and was one of its biggest defenders. During the rollout of the Affordable Care Act (ACA) in late 2013 and early 2014, Tavenner ran the Centers for Medicare and Medicaid Services. She now heads America’s Health Insurance Plans, the trade association for health insurers. Now that she’s no longer in government, she has to live with the Obamacare mess she helped create. In a recent interview with Morning Consult, even Tavenner admitted it’s not looking too good, predicting premiums would rise again in 2017.

Tavenner lays the blame on several factors. First, medical spending tends to rise year-after-year. Second, rising drug prices and super-expensive treatments that are being approved by drug regulators. Third, and most importantly, Obamacare regulations force insurers to accept all applicants regardless of risk. Moreover, insurers are not allowed to price for risk. Instead, they are required to overcharge people who are good health risks so higher-risk enrollees get a premium far lower than they would otherwise. This perverse regulation is attractive to higher-risk, sick people. But it’s a bum steer for healthy, middle-class people who do not qualify for subsidies and end up footing the bill in the form of premiums that far exceed their expected costs.

Proponents initially hoped up to 40 percent of enrollees would be young people who used virtually no medical care on an annual basis, but would pay premiums year after year to help subsidize insurers paying for sick people. But young people historically are the least likely to enroll in health coverage, since many of them don’t have jobs where health coverage is subsidized as a fringe benefit. Moreover, young people know the likelihood of suffering a heart attack, discovering they have cancer or having a stroke is highly unlikely. Even with the ACA’s carrot and stick approach, the cost of penalties are still much lower than the cost of insurance after subsidies. In addition, young people (or anyone for that matter) can often merely pay the penalty if they get caught. They can also enroll in coverage after open enrollment if they become ill.

Premiums in the exchange are unaffordable for most Americans. More than 80 percent of Obamacare enrollees receive subsidies; increasingly, only those who receive generous subsidies can afford the cost. One problem for insurers is that health is highly correlated with wealth. Thus, insurers are increasingly coming to realize people who receive subsidies are precisely the enrollees insurers do not want to cover.

The nation’s largest insurers, UnitedHealth Group, plans to leave the Obamacare market after this year. Why? It may lose up to half a billion dollars in 2016. That’s $500 million UnitedHealth Group will pay out and never get back. Many of Obamacare’s proponents describe for-profit health insurers as greedy. Yet, UnitedHealth Group apparently decided to forgo the change to earn profits in the Obamacare exchange. It probably realized the premiums consumers were willing to pay are incompatible with the risks UnitedHealth Group would have to take. Even with generous subsidies, it could not raise premiums enough to compensate for the higher cost enrollees it was attracting. Indeed, a BlueCross BlueShield Association analysis found Obamacare enrollees cost 22 percent more than individuals who are enrolled in employer plans.

Tavenner all but admitted the current system will be difficult to sustain under current conditions, although she tried to put a positive spin on her comments. House Speaker Paul Ryan went out on a limb and said the guaranteed issue provision of the ACA needs to be replaced by high risk pools. Of course, the devil is in the details. The ACA’s Obamacare exchanges are already turning into high-risk pools where higher-income healthy people do their best to stay away. Huge taxpayer subsidies would be required to adequately fund high-risk pools. The question remains: how much responsibility should people take over their own bad health behaviors that causes chronic diseases? In other words, how much should they be insulated from their own actions?

Health care spending is a fact of life. Individuals should not expect medical care to be free, paid for by employee health plans or heavily subsidized by government. But, neither should they be forced to spend the equivalent of a mortgage payment to subsidize other peoples’ medical needs. Obamacare is unsustainable and destined to collapses. The sooner we come up with a replacement plan, the less painful it will be.