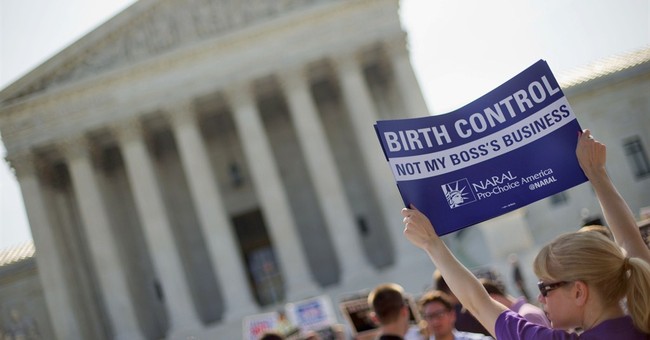 Much ado has been made about Obamacare’s contraceptive mandate. Democrats wanted to make contraceptives more affordable by mandating health plans provide contraceptive coverage. By contrast, opponents realize mandate benefits are not free; they come with costs that are more efficiently borne by individuals. Other opponents oppose the mandate on religious grounds.

Senators Kelly Ayotte (R-NH) and Cory Gardner (R-CO) have found the perfect way to bridge these disagreements, while still making oral contraceptives more affordable and more accessible. They cosponsored Senate Bill 1438, Allowing Greater Access to Safe and Effective Contraception Act. This bill would encourage and facilitate the sale of hormonal contraceptives over-the-counter (OTC) without a prescription.

Selling hormonal contraceptives over the counter is not a new idea. Both Planned Parenthood and the American College of Obstetricians and Gynecologists have supported the idea at one time or another. Oddly, men tend to favor the idea more than women [See Figure]. When politics is removed from the issue support climbs even higher. A poll by Reason found 70 percent of those surveyed believed it should be legal to purchase hormonal contraceptives without a prescription.

Unfortunately, an idea that most would agree with is being opposed on political grounds — merely because insurers would not be legally required to pay for contraceptives purchased without a prescription. Planned Parenthood claimed OTC contraceptives would “…force women to go back to the days when they paid out of pocket for contraceptives— which can cost upwards of $600 a year (equal to nine tanks of gas in a minivan).”

That argument is misguided; the price of drugs falls sharply once they become available over the counter. Consider the case with OTC heartburn medications — most of which were originally prescription drugs. Making heartburn drugs available without a prescription saved consumers an average of $174 per year.

Proton pump inhibitors (PPIs) are the treatment of choice for severe heartburn. PPIs were among the most widely-prescribed medications for many years and include such drugs as Prilosec, Nexium, Prevacid and Protonix. Prescription PPIs were never cheap; just over a decade ago the monthly cost for Nexium was almost $126. Prevacid and Prilosec were similarly priced when they were prescription drugs. The price for prescription Protonix is around $300 for 30 doses.

Prilosec became the first PPI to be approved for sale without a prescription. Once it began selling over the counter in 2003, the price soon fell from $4 per capsule to 60 cents. Today Prilosec is available at Walmart, Target, Walgreens and Sam’s Club for $0.55 to $0.64 cents per capsule. Generic Prilosec (omeprazole) is available at Costco, Walmart and Target at prices ranging from $0.38 to $0.45 cents per capsule. This is roughly 90 percent less than the price of prescription Prilosec. There are vendors on Amazon and eBay selling bulk omeprazole from India for even lower prices. One eBay vendor is charging only $22.45 for 600 tablets of generic Omeprazole. That’s only 3.7 cents apiece — a 99 percent discount off prescription Prilosec. Prilosec has now been joined on pharmacy shelves by OTC Nexium and OTC Prevacid, both of which also sell for about 85 percent less than when they were prescription drugs.

Heartburn drugs in an older class (called H2 receptor antagonists) were also once available only by prescription. When Tagamet was approved for sale over the counter in 1994 the monthly price quickly fell from about $83 per month to about $8 to $10 per month. About the same time, prescription Zantac cost $2.61 per daily dose. Costco now sells generic Zantac (ranitidine) tablets, 190 to a box, for $10.49 ($1.66 per month, or about a nickel per day).

Similar examples of drastic price reductions when prescription drugs became available over the counter include medications such as nonsteroidal anti-inflammatory drugs, non-sedating antihistamines, nicotine replacement and many others.

S.1438 would not prevent women’s annual reproductive health wellness visits from being covered by insurance at no-cost. Neither would it overturn the mandate that most health plans must cover prescription contraceptives. However, the bill would allow women to conveniently purchase hormonal contraceptives without a prescription at 54,000 local drugstores or 700,000 (non-pharmacy) retail outlets that sell OTC drugs. The proposal would also allow women to use their flexible spending accounts (FSAs), health savings accounts (HSAs) and health reimbursement arrangements (HRAs) to cover the cost.

“The Pill” was approved in 1960, so its safety record is well established. An estimated 95 percent of American women will take oral contraceptives at some point in their childbearing years. Allowing sales of hormonal contraceptives without a doctor’s prescription would benefit millions of women and men. Prices for prescription drugs fall by 90 percent or more within months of losing patent protection and becoming available over the counter. The price of oral contraceptives — if sold over-the-counter without a prescription — would likely follow the same trajectory.