Deroy Murdock
|
Posted: Oct 24, 2018 12:01 AM
Share   Tweet
The opinions expressed by columnists are their own and do not necessarily represent the views of Townhall.com. 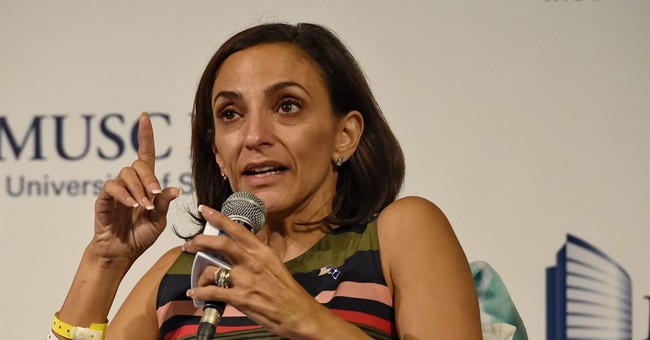 Rather than strictly engage black Republicans and conservatives solely on the issues, the Left routinely attacks blacks on the Right by weaponizing hideous rhetoric and images from the Jim Crow era and the Confederacy. Calypso singer and liberal activist Harry Belafonte once compared former secretaries of state Condoleezza Rice and Colin Powell with house slaves because they served in the G.W. Bush administration. The covers of Emerge magazine notoriously portrayed Supreme Court Associate Justice Clarence Thomas as a lawn jockey and also with an Aunt Jemima-style handkerchief on her head.

Nine prominent black Democrats endorsed Arrington in early October. Within days, WSC-FM radio host Kelly Golden received what she called “a screen shot posted on social media by voters supporting Katie Arrington’s Democrat opponent.” This “racist meme,” as it’s come to be known, depicts the White House with a Confederate flag flying above the Executive Mansion. The North Lawn has been transformed into a field full of cotton. Arrington appears as a Southern belle, reminiscent of Scarlett O’Hara. President Trump scowls from atop a white horse, looking every bit the plantation owner. Nearby, three black men are depicted as slaves. They are Arrington supporters Jerome Heyward and Joey Jefferson — both Democrats — and Maurice Washington, vice-chairman of the Charleston County Republican Party. The odious image is headlined: “We support Trump.”

Around his neck, Washington wears what has been mistaken for a noose. “It’s an iron collar with horns,” Washington explained on Golden’s radio program. “Usually a bell was attached, to prevent a slave from running away.”

“These are basically distractors hell bent on discouraging African-Americans or any minority from engaging in the politics of conservatives and Republicans,” Washington added. “It’s one of the playbook maneuvers of the Democrats. I’m not trying to be a partisan here at all, but this is indicative of local as well as national behavior.”

Washington noted that Charleston County Republican Chairman Larry Kobrovsky alerted the FBI and the local U.S. Attorney’s office about this garbage. “We’ve provided the information that they have requested, and we’re waiting to hear back,” Washington said.

“I was highly upset, offended, and humiliated to see such a nasty and hateful photo in 2018,” said local businessman Jerome Heyward, one of the black men mocked as a slave. He told me, “It’s sad that the racist bastards have to hide behind a racist photo.”

Asked for comment, Democrat congressional nominee Joe Cunningham responded: “The first we learned of any of this was when Katie started talking about it on the campaign trail. There’s absolutely no place for this in politics. We strongly condemn anyone spreading misinformation or hatefulness in this race and that’s why we’re running a positive campaign on the issues.”

Kelly Golden further observed on WSC’s website, “Certainly, if any local Republicans posted this ‘plantation meme,’ it would lead every national news outlet for days.”

“Because these two parties aren’t treated the same by the MSM. It’s something voters are tired of seeing play out on a daily basis and, make no mistake, this continued unfair and unbalanced treatment will keep driving voters to the polls November 6, to vote ‘Red.’”

As for GOP congressional nominee Katie Arrington, she excoriated this filth on Fox & Friends Monday morning: “It is absolutely the most disgraceful thing I’ve ever seen.”

Deroy Murdock is a Manhattan-based Fox News Contributor and an emeritus media fellow with the Hoover Institution on War, Revolution and Peace at Stanford University.