Deroy Murdock
|
Posted: Oct 17, 2018 9:39 AM
Share   Tweet
The opinions expressed by columnists are their own and do not necessarily represent the views of Townhall.com. 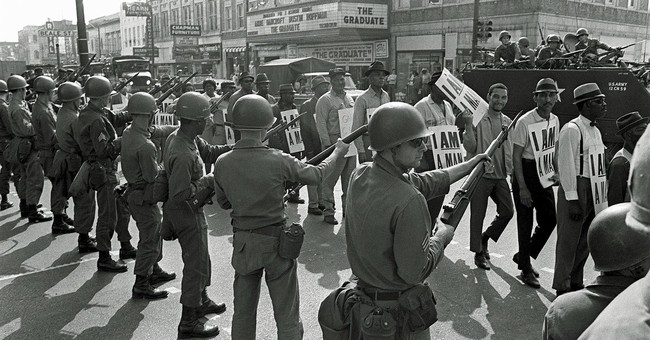 NEW YORK — One of the Civil Rights Movement’s most gripping images showed black male protesters who each held a placard that read, ‘I AM A MAN.’ These individual declarations of independence and expressions of personal sovereignty propelled the struggle for dignity that cost Dr. Martin Luther King, Jr. his life.

The Leftists in the media and political establishment who now hammer Kanye West essentially want him to wave a sign that says, ‘I AM NOT A MAN.’ They do not want West to think for himself, challenge liberal orthodoxy, or be his own person. Instead, they demand that he conform, support big government, and slam President Donald J. Trump around the clock. What most terrifies liberals is that West might take millions of black Americans with him, thus dooming the Left’s lust for ever-tighter political control.

West’s tormentors hurled shocking words at him before and after his meeting last Thursday in the Oval Office with President Trump, before they shared lunch.

These reprehensible, racist comments are typical of the Trump-hating Left. Black Americans who think for themselves are mocked and degraded with comments grave-robbed from the Jim Crow era. If President Trump had no black supporters, they would call his circle ‘lily white.’ Now, one of America’s most prominent black entertainers praises and visits the president, accompanied by football legend Jim Brown, and West is trivialized in hideous terms. Anyone who uttered such remarks while so much as walking past Fox News Channel’s headquarters would be excoriated for months.

CNN’s latest new low also found Don Lemon rooting around as if in the subway tunnels beneath Manhattan’s Time-Warner Center. His reference to West as a “minstrel” needlessly recalls the ugly days of white performers in blackface, and black actors mugging with their eyes bugging out, nearly to the breaking point. Lemon’s mention of West’s deceased mother “rolling in her grave” was exceeded in nastiness only by the TV host’s mocking of West’s mental-health struggles. If anyone at Fox News Channel had attempted such bipolarity shaming or “saneism,” our headquarters would be surrounded by socialist Howitzers.

“This is white supremacy by ventriloquism,” Georgetown University professor Michael Eric Dyson railed on MSNBC. “A black mouth is moving, but white racist ideals are flowing from Kanye West’s mouth.”

Dyson’s comment sliced West open and removed his moral agency. Dyson did not even grant West the courtesy of assuming that he actually holds views with which Dyson disagrees. Rather he trivializes West as a sort of Kermit the Frog, presumably operated by President Trump as some kind of racist Jim Henson.

If Dyson, despite his perch at my alma mater, really believes such rubbish, perhaps he can explain a few things:

• If President Trump really believes in “white racist ideals,” why did he campaign in fall 2016 at black churches in Flint, Michigan, and in Detroit?

• If Trump is so racist, why did he ask for votes at a mainly black charter school in Cleveland?

• If he is so anti-black, why did he meet in the Oval Office with the heads of historically black colleges and universities and create a White House office to assist them? HBCU leaders cite year-round Pell Grants as one reform that has sprung from this dialogue with the allegedly racist Trump administration.

“President Trump has kept his promise to make HBCUs a priority of his Administration, signing the HBCU executive order just six weeks into his presidency – by far, the earliest of any president,” HBCU Digest reported last month. Trump also “ordered certain federal agencies to develop annual plans to boost the competitiveness of HBCUs – to date, 29 federal agencies have developed HBCU plans.”

• Why did Trump express his hatred for blacks by making Dr. Martin Luther King, Jr.’s burial site a national historic park — a proclamation that Obama couldn’t be bothered to sign despite his eight years in the White House?

And, come to think of it, if President Trump really cannot stand blacks, why invite them to the West Wing, in front of the entire White House press corps, and then sit down for lunch with them?

And if Trump’s base really is nothing but white bigots, wouldn’t he scare them away, a month before the mid-term elections, by bringing one of America’s top rappers into the Oval Office? Is this really the best way to win the David Duke vote?

The Left’s foaming at the mouth is not just rude, vicious, and disgusting. It also makes zero sense.

White conservatives express their views in public all the time. People will disagree, challenge their facts, or even call them cold and insensitive. But no one ever tells Tucker Carlson, Sean Hannity, or even Donald Trump that they’re bad white people for believing what they do. No one ever accuses them of betraying their fellow Caucasians because they support individual freedom, personal responsibility, limited government, free enterprise, and peace through strength.

But when Kanye West so much as walks into the same room with the man who, on the whole, is today’s most prominent advocate for these ideas, the Left cannot simply differ with West. Instead, they virtually yank his skin from his bones and reject his very blackness. To the Left, West is not merely misguided or wrong. He has been fired from the black race.

This all confirms the Left’s panic that Kanye West will encourage black Americans to think on their own. They might discover the only silver lining in this vile cloud: the supposedly bigoted Trump presidency has delivered the lowest black unemployment in American history amid an economy growing at roughly double the pace that Obama called its maximum “new normal.”

With a recent Rasmussen poll finding President Trump’s approval among blacks at 36 percent, Democrats are nervous as hell. If half of those folks vote Republican or just stay home, the vaunted blue wave could become barely a ripple. The Left’s crucifixion of Kanye West might lead millions of black Americans to realize that the liberal-Democrat emperor has been buck naked for decades.

Deroy Murdock is a Manhattan-based Fox News Contributor and an emeritus media fellow with the Hoover Institution on War, Revolution and Peace at Stanford University.